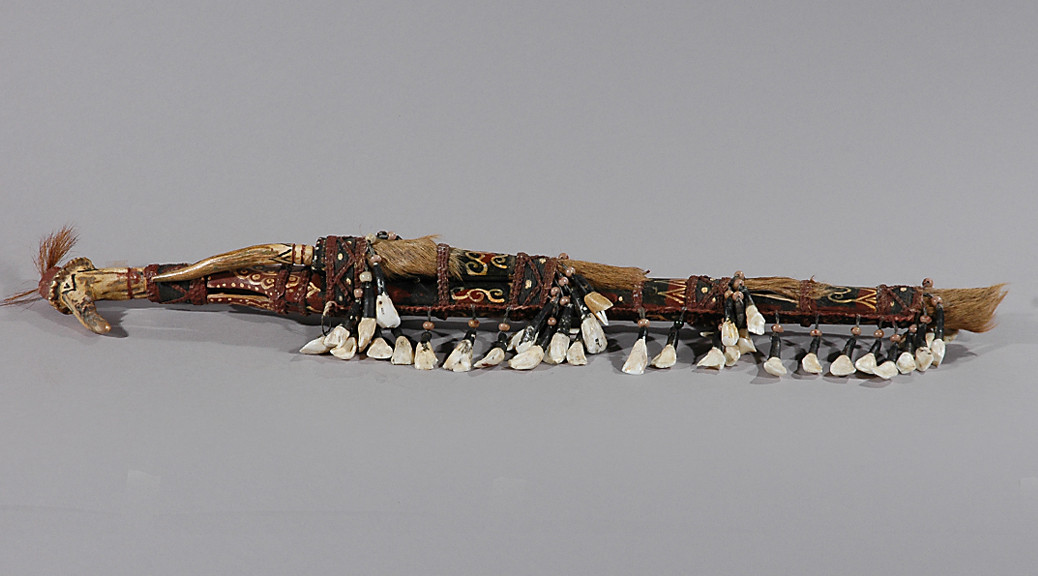 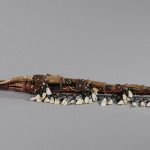 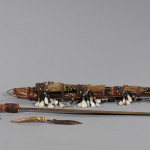 Sword and knife,decorate with hairs and teeth taken from the decapitated victims
The mandau is the traditional weapon of the Dayak of Kalimantan, Indonesia. In the past, the majority of the native people living in the island of Kalimantan, the Dayak, were animists in belief. Perhaps the most striking is their ancient tradition of headhunting practices. And it is also precisely for this purpose that the Dayak used the mandau.

Sacred kinds of wood from specific forest trees are used for carving the hilt of the mandau. Based on the design and additional features of the hilt, one can determine the origin of the mandau; for instance, there are several different characteristics of a mandau from various groups of Dayak people such as the Dayak Maanyan, Dayak Mbalan, Dayak Bahau, and the Dayak Ngaju. The average length of the blade of a mandau is approximately 50-70 centimeters, and it has a sharp edge. Usually the width of a mandau is about 4,5 cm at the widest part of the blade, and 3.5 cm at the smallest part. The length of the blade of this mandy is 66,5 cm and the width is 3,5 cm. It is made of heavy single edged steel, engraved and chiseled with repeating designs along the edge. The bone ‘handle’ is traditionally decorated (see below). 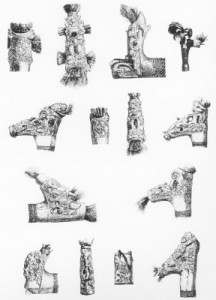 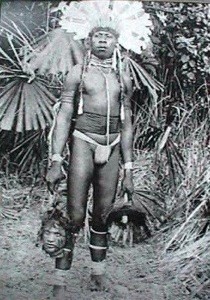 A mandau of the highest quality is called a mandau Batu. In this context, the word ‘batu’ refers to the stone meteorite used for forging this type of mandau. Back in the days in rural areas of Kalimantan, meteorite stones were believed to come from the ancestors of the Dayak people who reside in heaven, and were therefore regarded as a divine gift for their descendants on earth.

Although a mandau Batu is of a relatively light weight, it has a very solid and sharp blade. Due to its remarkable solidity and sharpness, it is possible to cut an iron nail in two pieces in a single cut, without leaving any marks on the blade. Obviously, the mandau Batu is a very sacred pusaka item handed down from one generation to the next, and thus cannot be sold or purchased.

According to the Dayaks themselves, the most sacred and powerful mandaus are those which were made by Panglima Sempung and Panglima Bungai, who are considered to be the two highest skilled masters.
The mandau is one of the most romanticized, albeit macabre, weapons of Borneo. The way of life of the Dayak aborigines, maintaining their ancient customs, habits and religious beliefs, has always involved the taking of heads. They became feared as head-hunters and only in recent years has the practice been “largely” abandoned. (Officially, headhunting doesn’t exist in Borneo despite the occasional report of an isolated jungle beheading). The swords are also “working” swords, capable of separating a branch from a jungle tree as much as a head from man.

Provenance: This very authentic example of a Mandau Dyak headhunter’s sword is from a Danish private collection from the 1940s. It has not been possible to trace from where the now deceased collector got it.