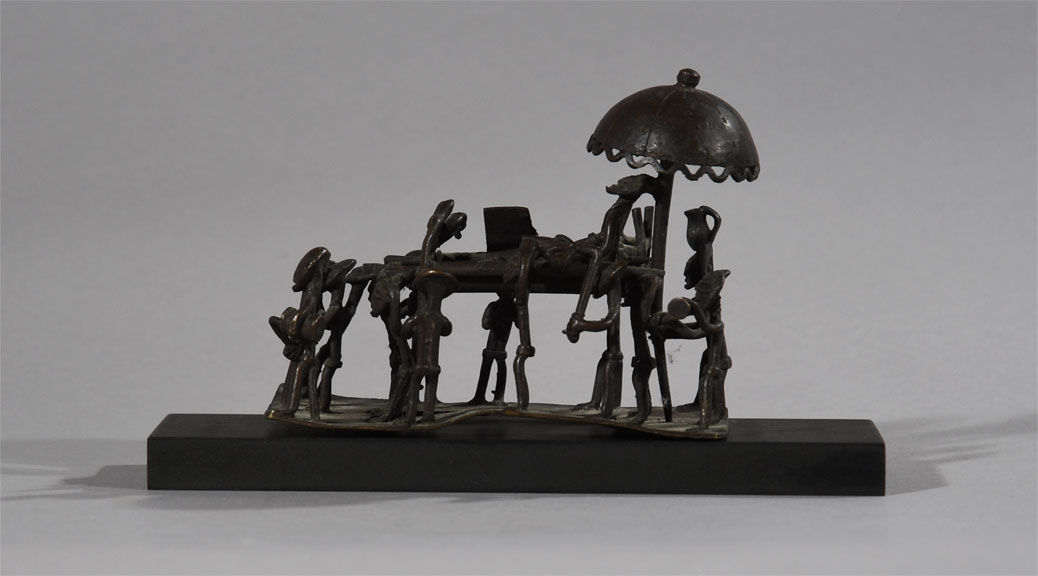 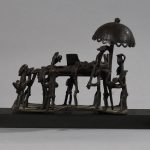 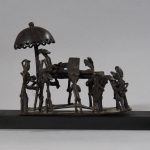 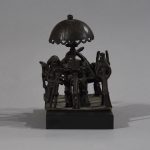 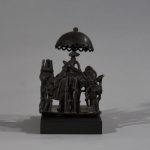 The display shows a royal Ashante person carried on a throne surrounded by minions probably on their way to the annual Ashanti Yam Festival.

Despite age, this figure is in very nice condition. The details are highly descriptive and given the fact that the scenery is performed after the cire perdue method, the scenery becomes even more impressive.

Cire perdue is a method of bronze casting using a clay core and a wax coating placed in a mould. The wax is melted in the mould and drained out, and bronze poured into the space left, producing a hollow bronze figure when the core is discarded. Also called lost wax.

The Ashanti people, located in the modern Ghana area, belong to the wider ethnic group – Akan. With the strengthening of the highly organized Ashanti federation’s political and economic power (from the 17th century onward) art flourished under its patronage.

For the most part in the service of the king – Asantehene, as well as the ruling classes in a society that formally and symbolically represented the state itself, art was the inevitable medium of communication. Through that, the message was delivered to subjects, allies, enemies, but also to the spirits of the dead who, as believed, died after death in the lives of their descent. Material, motifs, symbols, order of elements and the context in which a particular object was displayed, determined the nature of the message and those who received them.

The establishment of meaningful analogies between oral culture and art has given a particular style a result of the interaction between different creativity branches, and this style is manifested in certain motives and their “transfer” from one type of object to another. That is why certain ornaments found on stools also appeared on fabrics, and from fabrics they were transferred to the palace walls, which then inspired the production of jewelry and gold weights. By learning the social understanding of symbols, materials, colors repeated through Ashanti’s art corpse, the observer is witness to a whole world where each of these elements, such as a beam cuts through a prism of importance, becomes an active social character.