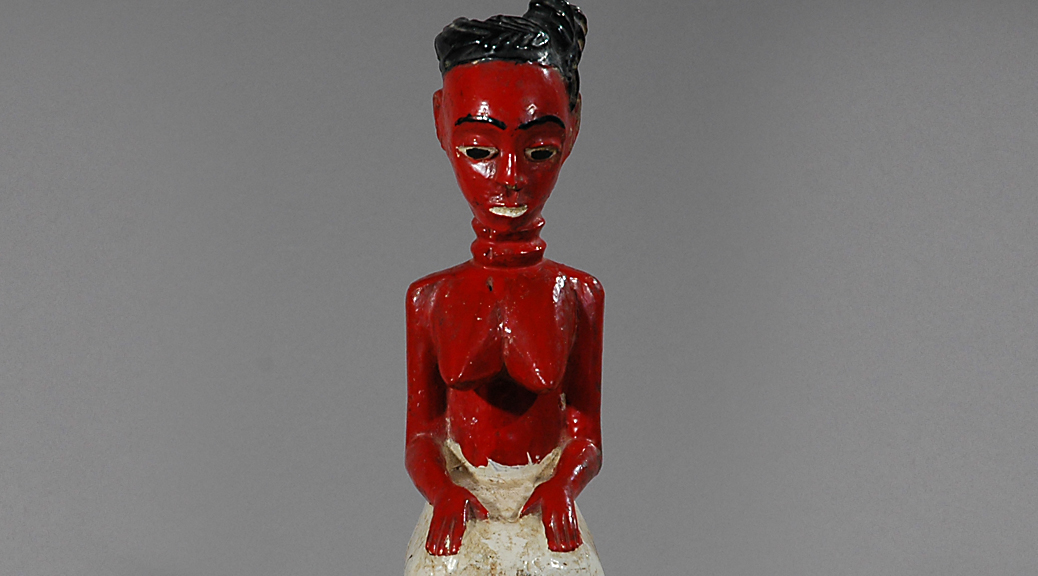 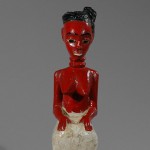 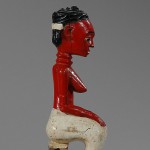 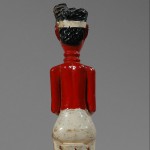 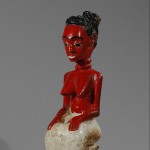 This finely made seated female figure is an interesting example of a colonial figure, which contains several symbols indicating a community leader: Her upright attitude and her finely arranged hairstyle. The chair on which she sits, is decorated with a Baule mask on the back and could indicate that she possessed a certain position of leadership in her community, as illustrated in the following statements:

Women were especially affected by three colonial practices that increased in the early 20th century: forced labor, taxation, and military draft. All of French West Africa was subject to periodic forced labor campaigns, which peaked in the 1930s, and declined thereafter. Ivory Coast was unique, though, in that the north of the colony had white run cotton plantations, for which locals were pressed into service when migrant labor (mostly from modern Burkina Faso) was unavailable. Unlike road building or other forced labor projects, for which men were called up for a period ranging from days to months, men (and some women) were pressed into cotton work for years at a time. While only a small number of women were drafted into French labor schemes, the process of taking men out of their communities for long periods of time meant that women were forced to provide for their communities. This, from the beginning of the 20th century, also meant some involvement in the marketplace, as French colonial taxation (in currency) superseded taxation in kind from the 1930s to 1950s. Women were also placed in positions of independence due to the recruitment of African troops (the Tirailleurs) which was especially heavy in Ivory Coast during the World Wars. Men who survived these experiences came home less likely to accept the strictures of colonial or customary rule, and while they were away, women were forced to provide for, and sometimes lead, communities.

The colors of the figure are not random. They reflect king Shango’s holy colors of red and white. He is regarded as a god, and stands as the cornerstone of many Afro-Caribbean religions.

Literature:
Herbert Isaac Ernest Dhlomo of South Africa published the first English-language African play about colonialism, “The Girl Who Killed to Save”: Nongqawuse the Liberator in 1935. And “Things Fall Apart”, by Chinua Achebe. Published in 1958.