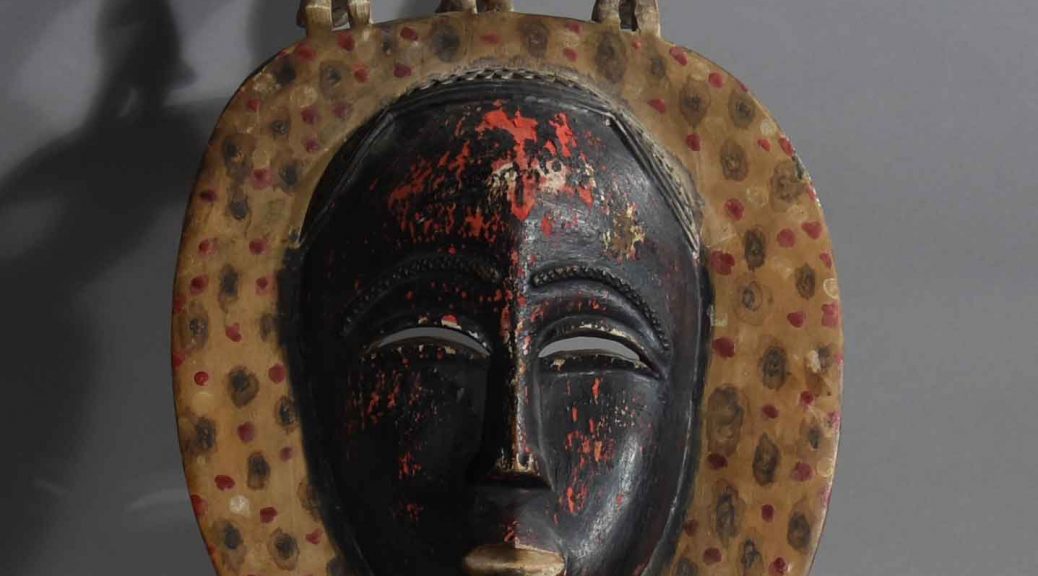 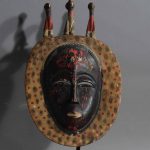 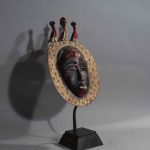 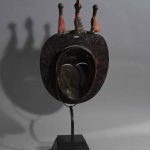 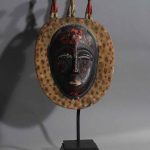 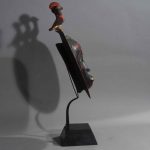 This is a distinctive and rare Baule Guru mask. Not only is this mask characterized by a mystery and grace, but also carved in an unusual way. The graceful face that is painted over several stages and with age are parts of the paint peeled off, so you sense the owner’s changing relationship with its appearance. At the top of the mask are three carved birds. A ‘tap’ and two ‘hens’. Each finely carved and painted in natural colors. Around the mask is an oval ‘frame’ which is also meticulously painted. The same applies to the rear of this ‘frame’.

Birds on a Guro Mask represent spiritual power and can hold magic potions or medicines to protect human lives. With some masks human features are combined with the powerful hornbill or yangaleya bird and on other a combination of human and animal traits can be found, including the hornbill or even imaginary beasts.

The masks of the Guro tribe represent the spirit of Gu, the wife of Zamble a supernatural being. Gu is often depicted as elegant, graceful, serene and beautiful. Sacred Guro masks, delicately crafted and colorful are used and honored during sacrificial gatherings, funerals, and celebrations. The Guro people are led by a chief the Je society is responsible for political, social and juridical affairs and decisions of war and peace, they also appear at funerals of members. The Guro and Yaure tribes are closely related and some scholars think that these two groups inspired the art of the Baule. The Guro tribe is from the Ivory Coast – West Africa.

The Baule are one of the Akan peoples that moved west to the Ivory Coast more than 200 years ago and adapted masking traditions from their neighbors, the Guro, Senufo and Yaure peoples. There are three basic types used in a special dance of rejoicing called Goli, symbolizing the social order. This mask is either a Kpan, (with elaborate coiffures and refined carving; they represent the Senior female in Goli ceremonies) or a Ndoma (an idealized portrait mask used at the close of ceremonies.)

Text by John Warne Monroe, Associate Professor, Iowa State University:
Masks from Côte d’Ivoire were one of the object types Parisian connoisseurs prized most highly in the 1910s and 1920s, when a market for African sculpture as art was just beginning to emerge. The grace, refinement and formal inventiveness of masks in Baule, Guro and Dan-complex styles made them quintessential examples of what was then called art nègre.  The final gallery in the landmark 1923 exhibition “Arts Indigènes des Colonies françaises et du Congo Belge” held in the Louvre’s decorative arts wing, the Pavillon de Marsan, featured a large ensemble of Ivoiran masks. (…). In addition to its timeless beauty, then, this mask is an important document in the history of taste.  It embodies the aesthetic ideals that inspired the connoisseurs who are in many ways responsible for inventing the Western mode of appreciating African objects as art.

Provenance: Danish private collection. It is believed that this mask is acquired around 1950 to 1960.