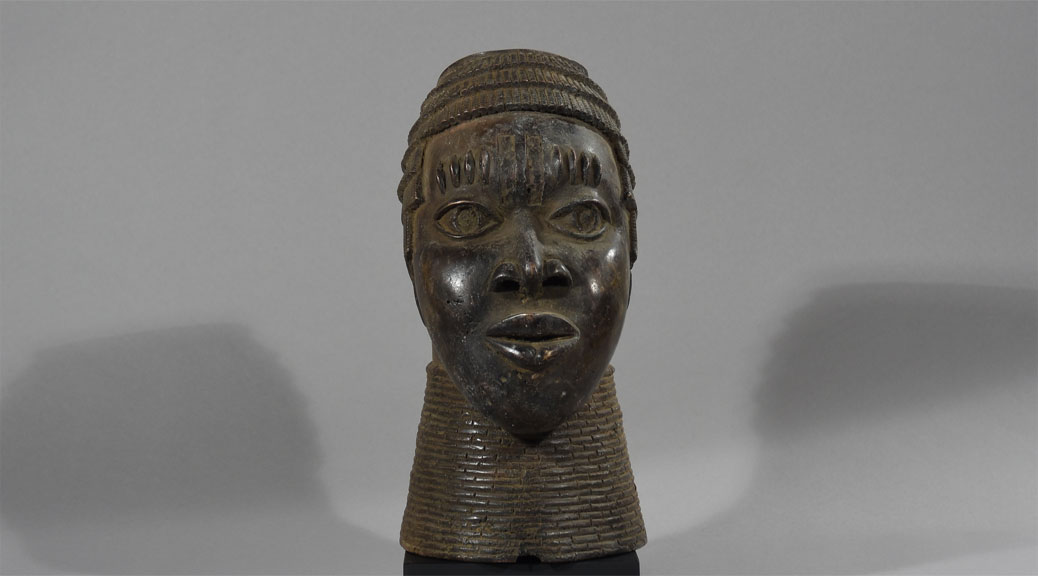 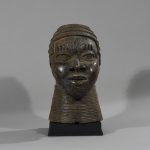 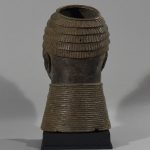 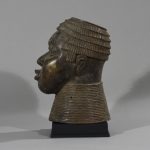 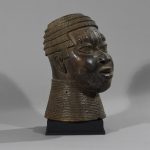 The art of the kingdom of Benin took the world by surprise in 1897, when thousands of its sculptures were seen by outsiders for the first time. The naturalism and royal imagery of these works were compared to masterpieces of Renaissance Europe, and their technical sophistication and precious materials were much admired, earning Benin art a central place in European and American museums. In the following one hundred years knowledge of African art has deepened and broadened, and the importance of Benin art has become even more apparent. Its cast brass and carved ivory sculptures constitute a continuous record, spanning more than five hundred years of the artistic heritage of one of Africa’s greatest kingdoms. With advances in archaeology, anthropology, and history, the story of how Benin’s art forms began and flourished provides a unique chapter in the history of African art.

This striking head represents an Iyoba – queen mother to one of the hereditary Oba (Kings of the Benin Empire). The gender of the individual can be ascertained partly from the shape of the face, forehead and smooth skin and partly from the four-dash “ikharo” scarifications over each eye. This is a face of a mature woman with rounded features, wide-open eyes with raised rims and the remains of iron inlay, a short nose and very full lips that are slightly parted. She wears a short coral beaded crown. Coral pearl necklaces were of paramount importance as symbols of sovereignty, and were reserved for the Oba, the Queen Mother and the high dignitaries. Most unusually, the apex of the head is open to receive an oblation – this is a remarkable finding for an Iyoba head as these usually have a forward-angled point on the top of their coral crowns. The neck/base of the piece is made up of numerous lines of fine beading.

In the eyes of the Benin populace, the Obas were divine beings, and these heads were created after their demise in order to be displayed on altars dedicated to their memory. Until the late 19th Century, the Benin centres were a ruling power in Nigeria, dominating trade routes and amassing enormous wealth as both the military and economic leaders of their ancient empire. This changed with the appearance of British imperial forces, which coveted the wealth of the royal palaces and found a series of excuses to mount a punitive expedition against the Oba’s forces in 1897. It was only at this point, the moment of its’ destruction, that the true achievements of the Benin politics became apparent to western scholars.

Benin royal palaces comprised a sprawling series of compounds containing accommodation, workshops and public buildings. As it grew, the buildings pertaining to previous Obas were either partially refurbished or left in favor of newer constructions; this led to a long history of royal rule written in sculptural works that rank among the finest that African cultures have ever produced, and until European advances in the 19th century, they were the finest bronzes that had ever been made. Brass or bronze Oba heads were used to honor the memory of a deceased king. Typically, the son of the dead king – the new Oba – would pay tribute to his father by erecting an altar in his memory. These altars, low platforms of mud that were arrayed around the perimeter of the royal courtyards, were decorated with various artefacts alluding to the Oba’s achievements in life.

Condition: This is a true Benin masterwork in perfect condition, except for two small notches in the bottom edge of the figure. Molded in dark brown bronze, smooth and well formed in every detail. This piece would take the pride of place in any serious collection of African art.

Age: Most probably early 17th–18th Century according to comparisons with similar findings.