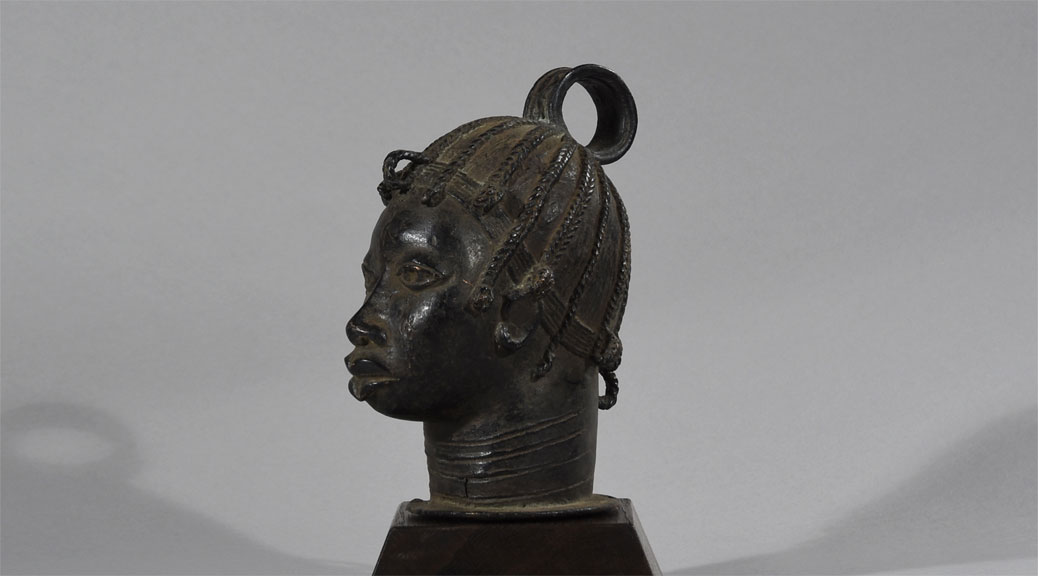 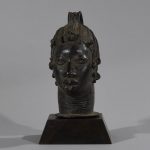 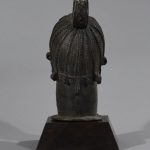 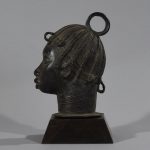 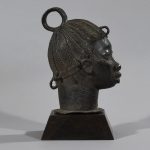 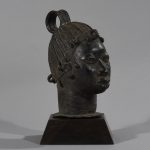 This is a delicately molded miniature bronze head depicting a beautiful young girl’s face. Her hair is neatly arranged in many small braids and a larger headband.

Married to the Oba (the King), this young lady became Queen Tete, the Queen of The Edo or Bini (from the word Benin) an ethnic group primarily found in Edo State, and spread across the Delta, Ondo, and Rivers states of Nigeria. Married to the Oba, Queen Tete was the only woman to hold a high office at the court of Benin. Bronze altar pieces and altars representing her as a royal person of high rank. The palace of the Oba, where the costly royal shrines was to be found, was considered the center of the capital of the kingdom. The art of Benin is undoubtedly a royal art. Many guilds of craftsmen worked mainly for the King but could execute works for other clients with the royal permission.

The Kingdom of Benin, situated south of the current Nigeria, is renowned for its magnificent bronze and ivory sculptures. The majority of everyday Benin objects were made for and associated with court ceremonies. The art of bronze casting was introduced around the year 1280. The kingdom reached its maximum size and artistic splendor in the 15th and 16th century. For a long time the Benin bronze sculptures were the only historical evidence dating back several centuries into the West African past, and both the level of technical accomplishment attained in bronze casting, as well as the monumental vigor of the figures represented, were the object of great admiration.

Condition: The head is in perfect condition and appears in a dark patinated copper/bronze color. No bumps, the base lacks a small piece to the left.