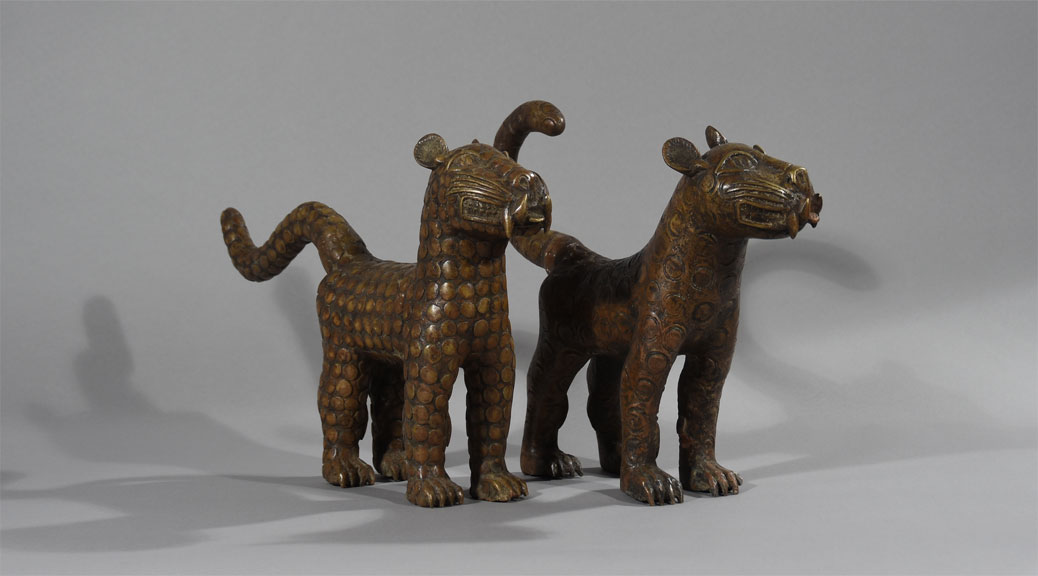 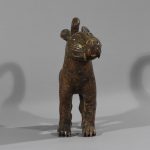 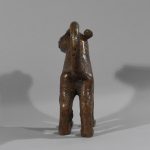 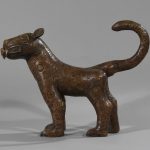 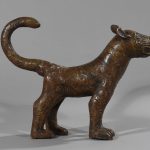 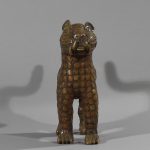 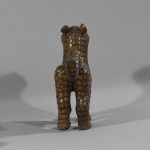 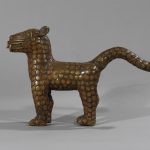 This is a pair of two perfectly shaped bronze leopards, a male and a female. The male presents an upright tail, while the female tail is almost  stretched (male tail up/female tail down).

Benin art is the art from the Kingdom of Benin or Edo Empire (1440–1897), a pre-colonial African state located in what is now known as the southern region of Nigeria. The kingdom was called Igodomigodo. It was ruled by a series of kings, known as Ogisos, which means Rulers of the Sky. Almost all Benin art was created to honor the king, or Oba, who has reigned, with his ancestors, from the 15th century.

The original Benin Bronze Leopards were featured items in the throne room of the Oba of Benin. They stood guard on either side of the throne. These Benin bronze leopards are symbols of regal power. A Royal Icon.

The extraordinary bronzes of the Benin kingdom exhibit a virtuosity and sophistication of style that has astonished the Western world since they were first known. Although similar to many older works, these are reproduction pieces.

However, they are still unique bronze sculptures, as each one is carved and molded individually using the lost-wax casting method (in French – cire perdue). This method has been widely practiced on the African continent for centuries. While it is difficult to establish how the method was developed or introduced throughout the region, it is certain that West African sculptors were casting brass with this method for several hundred years prior to the arrival of the first Portuguese explorers in 1484.

The technique requires a great deal of skill, involving extensive knowledge of both pottery and metalworking, and a careful attention to changing temperatures to prevent unwanted cracking or other damages to either the clay mold or to the metal sculpture during the casting process.

The figure is carved in vax and then encapsulated in a clay shape. Then, a small hole in the clay is made and the mold is then heated up, so that the wax melts and runs out. Then the liquid metal (bronze) is poured into the holes which then replaces the wax. Finally, the mold is broken. Hence the term “waste mould casting” or “lost-wax casting.” Since you have to crush the mold, you can only make one original cast.

Some of the earliest and most accomplished bronze works found in Africa date back to the tenth century and are from a site called Igbo-Ukwu.