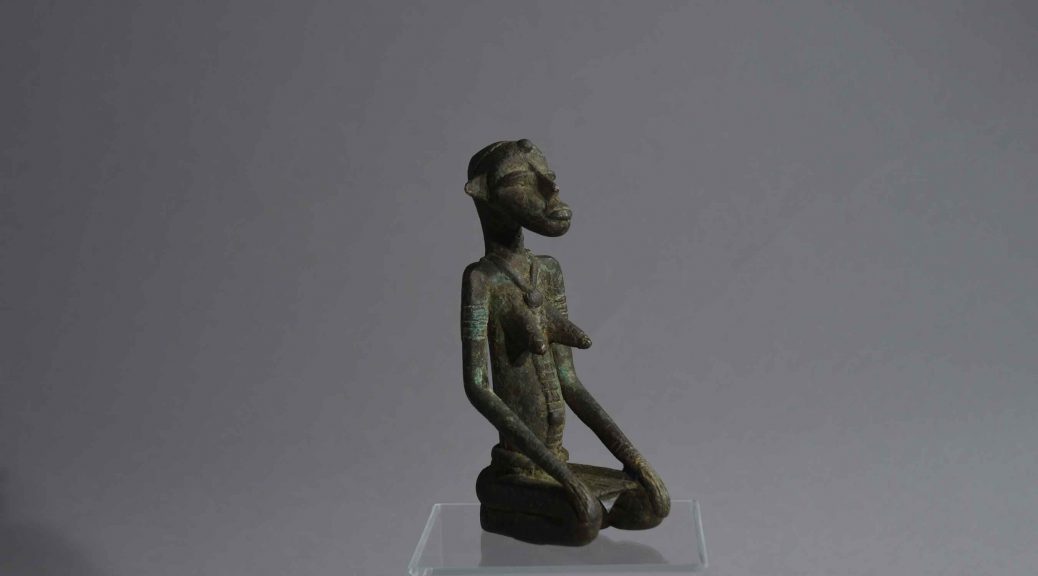 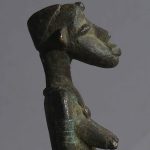 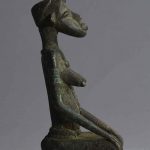 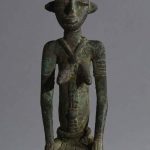 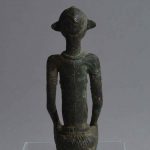 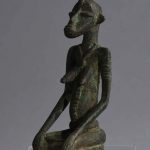 The Djenne culture has produced some of the most remarkable and unique pieces of sculpture ever found from this period, and this lady is no exception. Crafted out of beautifully well-molded bronze, she sits before us, calmly and peacefully almost majestic. However, traditionally, she is typical of the Djenne style. One of her most remarkable features is her elongation. Perhaps it was through such pieces that the Italian Mannerist artist Parmigianino created his masterpiece “Virgin with the long neck.” Nevertheless, the beauty of this bronze female is notable.

Her upright attitude, beautiful face and the protruding chin and neat hairstyle and jewelry around her neck testify high personality. Like the long limb arms and folded legs, the protruding navel, the pointed breasts and the accentuated nipples, heighten her angularity. Her eyes and mouth both protrude, which is typical of Djenne style as are the rings on her arms. It is such beauty and precision that made the Djenne pieces so unique, and never allow the eye to become bored but instead allows it to roam and take notice of everyone aspect.

This piece is from the Dogon Peoples from the town of Djenne, Mali Upper Niger River and shows a 14th to 15th century bronze figure. The piece shows the correct ware and patina for its age and is truly a museum-quality piece. The old town of Djenné, Jenne-Jeno, was founded around 800 on an island in the inland Niger Delta of Mali (Schaedler 1997: 32). Trade relations with countries north of the Sahara resulted in both economic prosperity and an exchange with Islamic cultures that is reflected in some of the artistic imagery of Djenné sculpture. Most of the works discovered at the site of ancient Djenné date between the 12th and 16th centuries; they were found during the annual inundation of the Niger Delta when the water uncovers objects from the overlaying soil.

Condition: Beautiful verdigris patina from copper oxides. Probably berried and laying in the ground for some time.

Provenience: Old Belgian private collection who collected in situ near the Niger river and between the two town Ségou and Mopti around 1950s.

Djenné is the oldest known city in sub-Saharan Africa. Founded between 850 and 1200 A.D. by Soninke merchants, Djenné served as a trading post between the traders from the western and central Sudan and those from Guinea and was directly linked to the important trading city of Timbuktu, located 400 kilometers downstream on the Niger river. It was captured by the Songhai emperor Sonni ‘Ali in 1468. Historically, Djenné was known as a center of Islamic learning, attracting students from all over the region who were followers of the Muslim faith. A very large number of terracotta sculptures have been found in the Inland Delta of the Niger River area of Mali, which date from the last centuries of the first millennium A.D. through the 15th century. The style is often referred to as the “Djenné” (or Jenne) style, named after a city that rose to prominence in this area in approximately 500 A.D. and experienced great prosperity until the end of the 15th century.