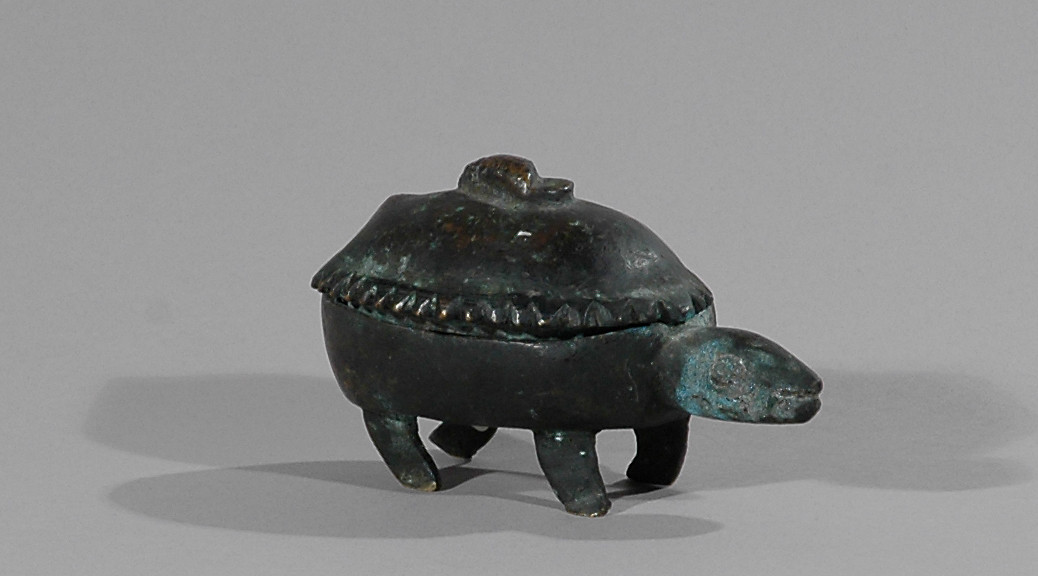 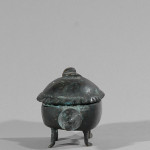 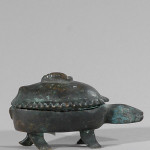 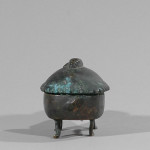 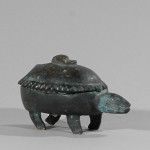 This fine, small bronze container, which is shaped like a turtle has been used by a distinguished lady to contain her make up. The scent of perfume is still in the container.

Dogon art is extremely versatile, although common stylistic characteristics – such as a tendency towards stylization – are apparent on the statues. Their art deals with the myths whose complex ensemble regulates the life of the individual. The sculptures are preserved in innumerable sites of worship, personal or family altars, altars for rain, altars to protect hunters. As a general characterization of Dogon statues, one could say that they render the human body in a simplified way, reducing it to its essentials. Some are extremely elongated with emphasis on geometric forms. The subjective impression is one of immobility with a mysterious sense of a solemn gravity and serene majesty, although conveying at the same time a latent movement.

The Dogon style has evolved into a kind of cubism sculptures serve as a physical medium in initiations and as an explanation of the world. They serve to transmit an understanding to the initiated, who will decipher the statue according to the level of their knowledge. The subjective impression is one of immobility with a mysterious sense of a solemn gravity and serene majesty, although conveying at the same time a latent movement. Carved animal figures, such as turtles, dogs and ostriches, are placed on village foundation altars to commemorate sacrificed animals.
Historically, small bronzes such as this container were signs of wealth and prestige, and were used to bring the protective spirits of the ancestors into the home. The bush spirits represented here are the snake, the lizard (in Kanaga shape), the turtle, and the scorpion.

Provenance: This piece was purchased just outside of Dogon territory in Burkina Faso in 1986.

Age: According to the traces of use the container is estimated to be from the late 19th to early 20th Century (but it might be much older).