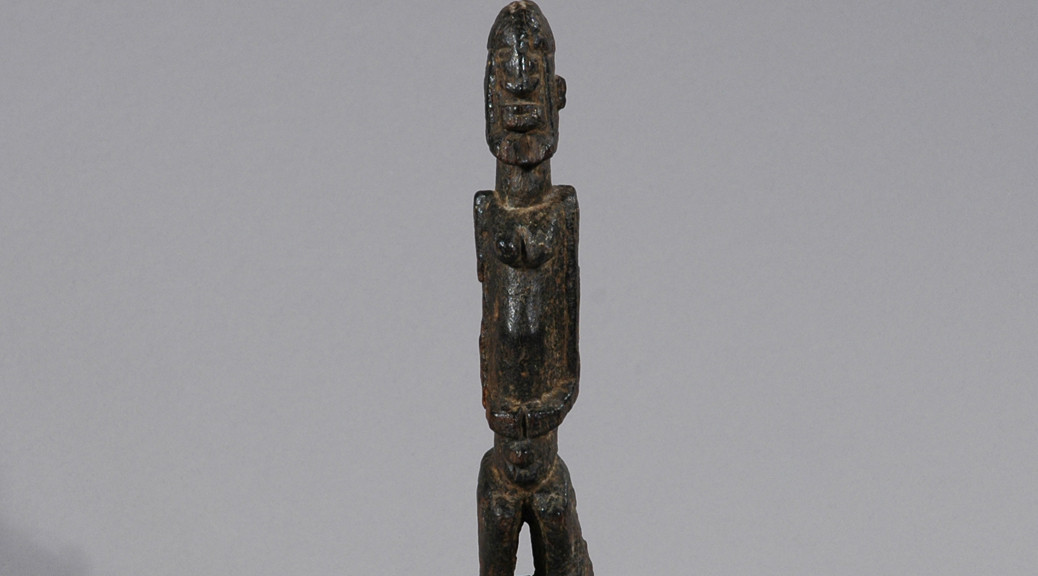 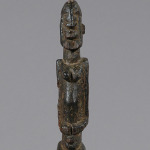 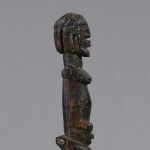 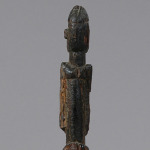 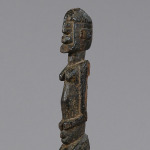 This is a standing Dogon male figure with narrow rectangular facial plane, closed eyes and remains of a beard causing a calm, nearly majestic expression. The symmetrical body is built of geometrical forms, the elongated upper part of the body is homogeneously enclosed by long arms with folded hands and the legs are sharply bent.

In spite of its small size, the figure might belong to the type of the “dege dal nda”, the so-called “sculptures of the terrace”. They are taken out of storage for the funerals of rich men and dressed and displayed on the rooftop terrace of the deceased. For the rest of the time they were stored in the house of the “hogon”. They were a privilege of rich families. Because of the sticky sacrificial patina, the present figure might as well belong to the type of the “vageu” figures. These figures were placed aside the body of important deceased clan members in order to absorb a good deal of their “nyama”, the spiritual forces of the dead. Afterwards the spiritually strengthened figure was returned to the shrine, where now sacrifices could be made to obtain and secure health and fecundity. Sacrificial liquids were poured on the figural sculptures, including the blood of chickens, sheep, and goats, millet porridge, mixtures of various fruit and plant juices etc. These sacrificial materials are vehicles for “nyama”, the vital force that determines a persons mental and physical well-being.

The early history of the Dogon is informed by oral traditions, which claim that the Dogon originated from the west bank of the Niger River (10th to 13th centuries). They emigrated west to northern Burkina Faso, where local histories describe them as kibsi. Around 1490, they fled a region now known as the northern Mossi kingdom of Yatenga when it was invaded by Mossi calvary. They ended up in the Bandiagara cliffs region, safe from the approaching horsemen. Carbon-14 dating techniques used on excavated remains found in the cliffs suggest that there were inhabitants in the region before the arrival in the Dogon, dating back to the 10th century. Those Dogon who did not flee were incorporated into Mossi society and were known as the nyonyose, or descendants of the first inhabitants.