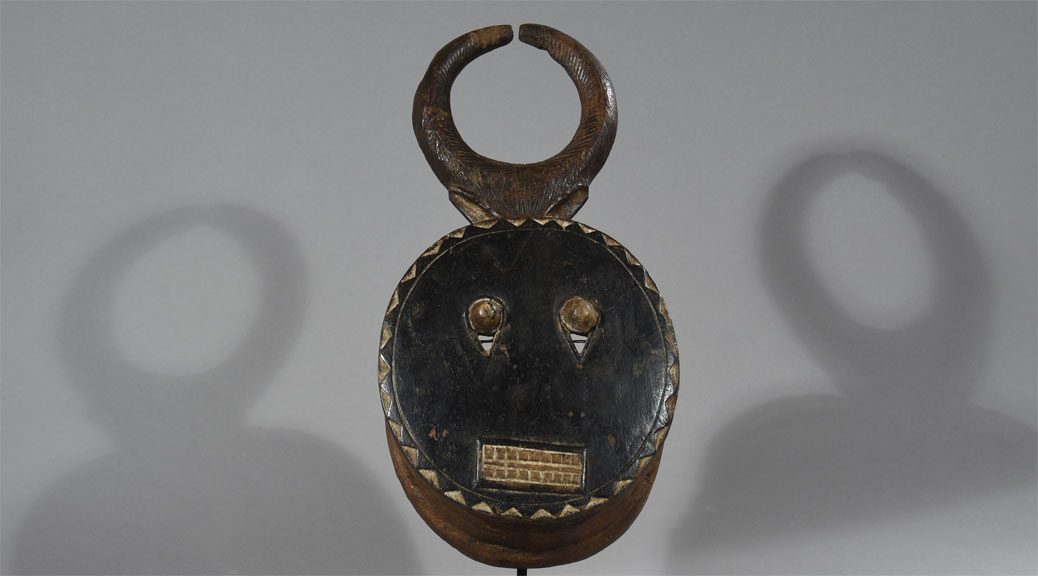 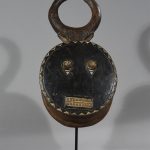 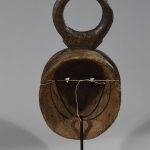 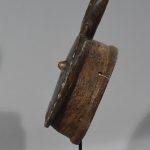 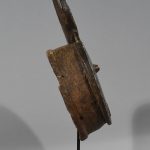 This is an old very well-carved authentic mask, called kple kple which is a specific type of mask made by the Baule people. Common features of the kple kple disc shaped facemasks include antelope shaped horns, round eyes, rectangular shaped mouth and geometric designs. The red face is considered female and the dark/black face is considered male.

Kple kple masks are one of the great abstractions in African art. They are used in ceremonies related to the Goli festival of the Baule people. The Goli festival is a day-long spectacle that involves the whole village. It is performed during funerals as well as commemorative occasions and agricultural events. The Goli masquerades involve three rituals during the day; dawn, afternoon and after sunset. Kple kple masks appear at dawn and again briefly during the evening to announce the arrival of Goli Glin, a zoomorphic figure or a kpwan, an anthropomorphic figure. The mask wearer mediates with supernatural forces during the ritual, which have a positive influence on the village people. During the festivities, the young male mask wearers are often draped in goatskin that covers their back – along with a raffia skirt. The mask is attached to the costume with vegetable fibers.

The Baule people represent one of the most important tribes of the Ivory Coast. Bauli  means ´the son is dead´ and refers to the origin of the tribe. According to a legend, Queen Aba Pokou led her people on an exodus towards the gold mining areas during the 18th century and had to cross a river, where she was obliged to sacrifice her son to the river god, thus giving her people the name Bauli, ´the son is dead´. During the 19th century, the queendom disintegrated due to internal conflicts, and when the French colonial arrived in the beginning of the 20th century, they found only a network of villages, headed by councils of men.

With their sense of stylization and attention to detail, the Baule people have produced some of the most elegant objects of all African art for centuries. Even today they still produce numerous sculptures and masks with great skill.

Condition: This mask is owning authenticity. It is in every way ‘perfect’. Despite age and heavy use it is intact. Both the facade and the backside testify to diligent use. 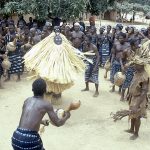