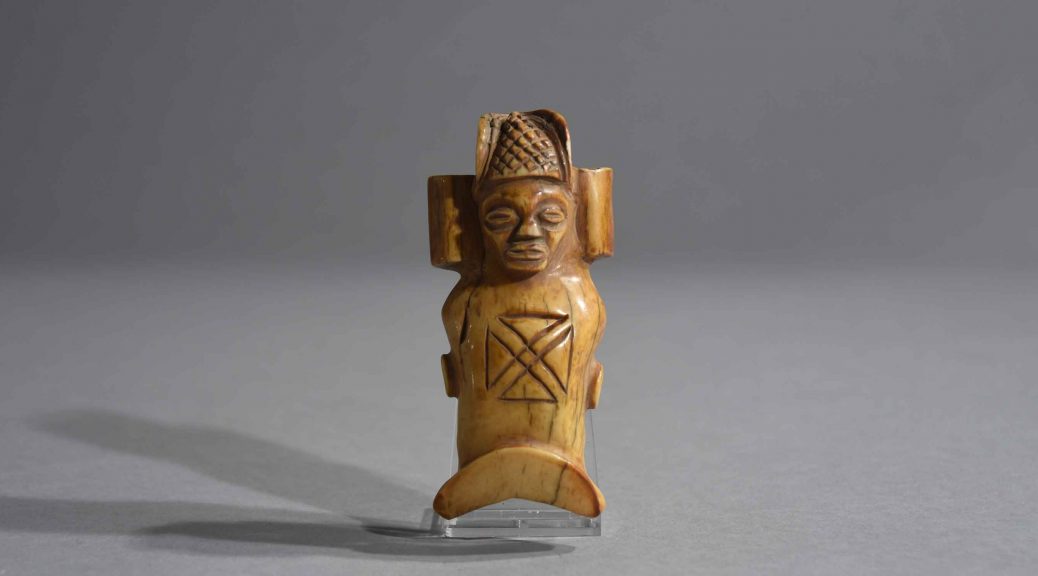 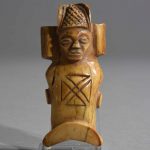 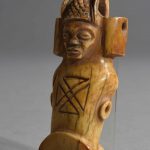 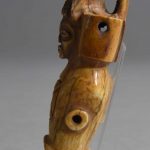 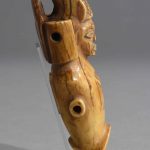 This remarkable ivory sculpture designed as a flute and worn as a pendant was made in Angola by the Chokwe group and is in exceptionally good condition. It is a standing male figure with powerful tattoo over abdomen, a very highly patinated surface and a complex coiffure or piece of headwear. The hatching of the hairstyle and the central forehead scarring (which is known as cingelyengelye) is extraordinary. The figure however is not merely decorative. It is a representation of the Chokwe’s mythical founder, Tshibinda Ilunga, the Luba ancestor who gave rise to the Chokwe.

The Tchokwe are distributed across Angola, the DR of Congo and Zambia, and can trace their ancestry to the Lunda Empire of the 15th Century when a mass-migration occurred out of Lunda/Luba territory. The resulting kingdoms – including the Tchokwe, Luena, Songo, Ovimbundu and Imbagala – were all closely allied until the mid. 19th Century when the Tchokwe, following a great famine, migrated south. Their art and culture are thus distinctive compared to that of the other Lunda-descended tribes.

Society is governed by a God-King (Mwana Ngana), under whom men (Mugonge) and women’s (Ukule) societies control age classes and ensure social harmony. This system has resulted in a series of masks that are designed to defuse social tensions, celebrate important events (i.e. circumcisions), impose judiciary powers and promote fertility, health and well-being. The main mask forms for which the Tchokwe are known are the male Cihongo mask – which symbolises wealth, power and judicial authority – and the female Pwo mask, which is an embodiment of idealised femininity. The two “sexes” were sometimes danced together at ceremonies to ensure fertility and prosperity. The statues made by the Chokwe are primarily concerned with representing their ancestors, as seen here, or queens. Some more flippant representations were made from the mid. 20th Century for trade.

Tshibinda Ilunga is important to the Chokwe, and for this reason, representations of him are usually very well-rendered. Ivory representations are rare and belonged to high-ranking members of society. This is an impressive piece of African art.

Provenience: Belgian private collection. According to the heirs collected in situ in the 1950s.