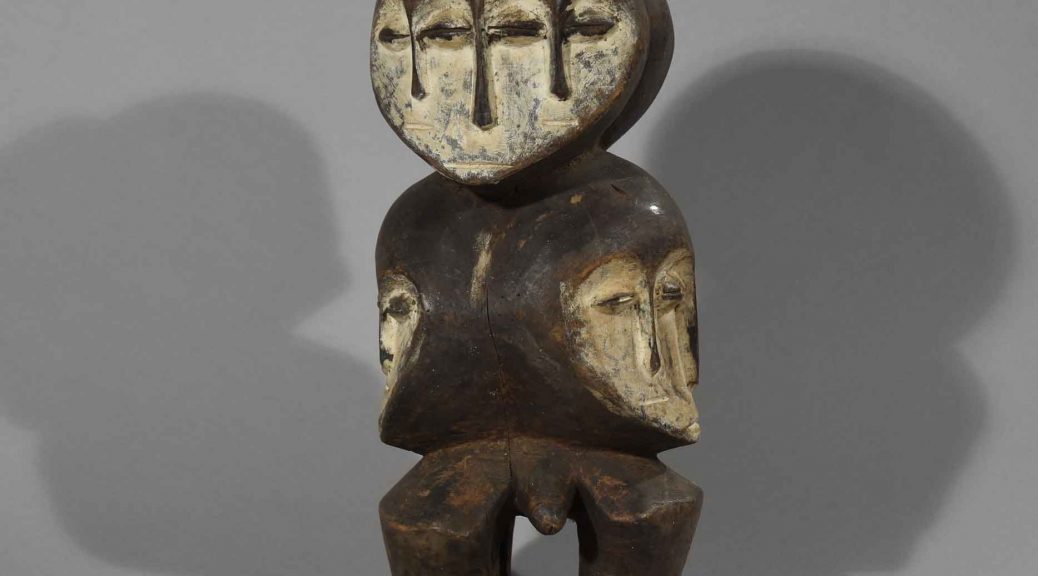 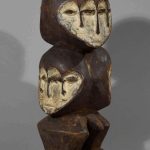 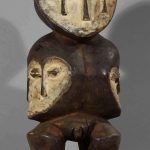 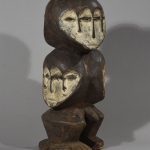 This fine antique multi-headed and multi-faced figure with four times three-faces occurs very infrequently amongst the Lega in eastern Congo. These statues have special meaning as they belong to a ‘hunting charm’ that the priests of the Lega community and its ‘Bwami’ league carried out. They were believed to bring fortune during hunting. According to J.-B. Bacquart, the figure represents typically the elephant hunter.

The three heads and three faces of this figure express the idea of hunting elephants perfectly, the largest and most prestigious game hunted by the Lega: The successful hunter must be alert and must ideally be able to see in all directions simultaneously. This figure contains four faces, each whitened and with long slender noses, oval eyes and small pierced mouths on top of two powerful legs and an erect penis that demonstrate his masculinity. The priest blessed the carved statue into becoming a ‘fetish figure’ that was believed to bring power and good fortune during hunt.

The people who constitute the Lega tribe live in autonomous villages situated at the summit of a hill surrounded by a palisade. The position of chief is held by the oldest member of the clan who must also hold the highest grade within Bwami society. The function of the Bwami, which is open to both men and women, is to regulate the social and political life of the Lega. It maintains ethical principles and establishes social norms. The diverse, rigidly articulated arts of the Lega are related to the initiation rites. The fetish figures were generally used during initiation ceremonies related to the Bwami secret society. According to J.-B. Bacquart, this multi-headed figure represents the elephant hunter.