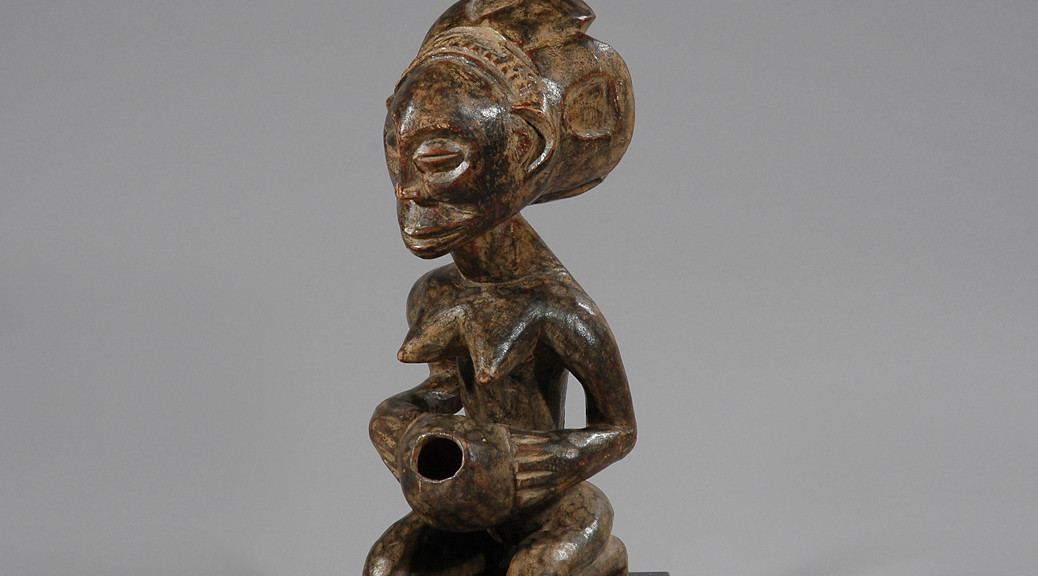 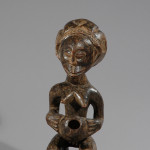 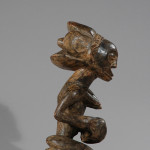 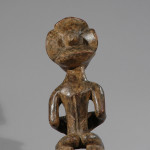 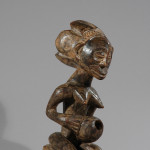 This Kneeling female figure holding a bowl comes from the Luba people of the Democratic Republic of the Congo. Elements that identify this figure with the Luba include characteristic carving structures such as the large head, the triangular face very close to the Songye style, detailed facial features, and the traditional hairstyle. The theme of bearer with bowl is common to the Luba and related peoples such as the Zela and Songye.

Called Mboko or Kabila this bowl bearer figure recalls the divination bowl (mboko) usually made out of calabash and owned by the diviner who used it to keep the sacred white chalk, Mpembe, and other divination tools and ritual elements necessary in the divination process. The bearer figure alludes to the female spirits who, according to the Luba, play the role of intermediaries between the living and the Vidye spirits of the spirit world. The kneeling position is symbol of devotion.The function of the figure is to call (kubila), beg or implore these spirits to protect, rescue and assist the living. The spirits Vidye are honor in order to support the kingship or to guide the medium in the divination process. The Vidye spirits speak through the moth of the bear figure. Through these sculptures the diviner calls for the help and assistance of the Vidye spirits, the divinities of the divinations.

Among the Luba, art and mythology are often the same, sharing visual images whether carved or spoken of during their rituals. The bearer figure is an interesting example that shows the close relationship between the kingship and the divination. The spirits Vidye have control over the kingdom of the living. To take possession of the throne the King should have the approval of the Vidye. The Mpemba contained in the bowl would be the crucial element to consolidate the link between the King and the Vidye. During the investiture of a new King the central part of the ceremony is the delivery of the sacred white chalk or powder (Mpemba) to the new King. This Mpemba would then be kept in the bowl of such a figure in the chief’s main house and would be used in the ritual of purification and renewal and in honor of the spirit world. The bowl is always held by a single female or a pair of female figures. This figure is identified with the female ancestor spirit who is regarded as guarantors of the continuity of the lineage. It is through woman that the ancestor reveals himself anew in the child. It is interesting to note that the wooden bowl-bearers were kept by the wives of chiefs or prophets. The objects were invested with such a degree of sacred and political power that their possessor held unchallenged authority. The bowl bearer possessed a prophetic function and served as an instrument of divination. Such figures were used as oracles by the royal diviners (Bilumbu). They were also used as receptacles of divination spirits and spiritual guides to the diviner. These spirits assist diviners in the process of revealing the author of misfortunes and the spiritual responses to the problem. Mboko also assist in reading the future and solving problems. During the consultation, the diviner would have this sculpture in front of him. His body, especially, the eyes and arms would be covered or painted with chalk which provides him with the ability to read the invisible.