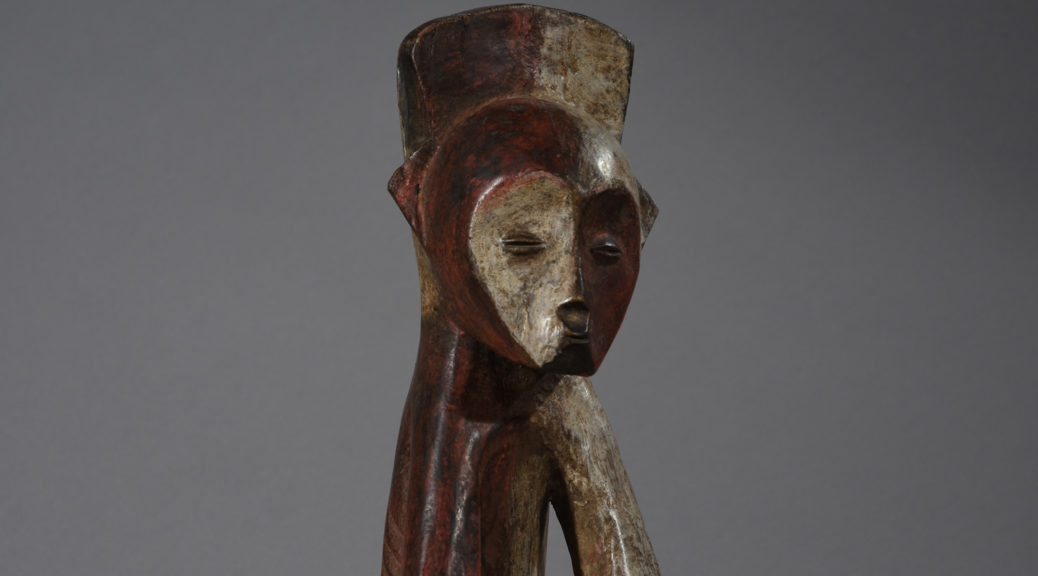 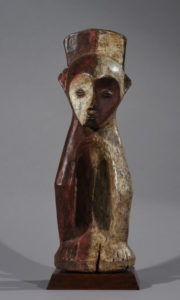 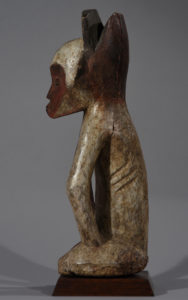 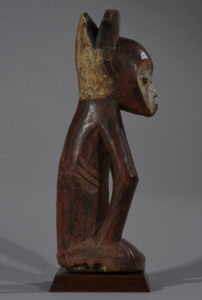 This male figure with leaning / hanging shoulders, sunken face and concave torso is a ‘classic’ example of an ‘okifa figure’ presenting a man from Lilwa-Bund in the Mbole community waiting to be hanged. The present figure, made of hardwood and colored red and white (in African art, white usually symbolizes death).

Death by hanging played a crucial part as ‘terror and warning’ in Mbole’s community. This punishment was applied to members of the “lilwa” community who were believed to betray society. These “okifa” (= “hung”) figures cannot be considered as individual portraits.

The ‘Lilwa community’ teaches both morality and religion. Women and elders, both living and dead, are to be respected. Theft, adultery and lying are prohibited. A person who breaks the law is subject to public reprimand and may suffer further punishment. In the most severe cases the wrong-doer is hung and buried in an unmarked grave.

These ‘okifa figures’ play a significant role during inauguration of young Mbole men. They are preserved in special huts in the woods near the inaugurated bush camp. This is because ‘okifa’ is considered a warning and a deterrent and serve so-called ‘educational purposes’. They show living young initiates what would happen to them if they violated the rules and laws of the ‘Lilwa community’!

Age: Between the 19th and the first third of the 20th century. Collected in 1930 (according to the collectors’ heirs).

Condition: With beautiful patina and in perfect condition. The red / white colors appear with a nice smooth surface.