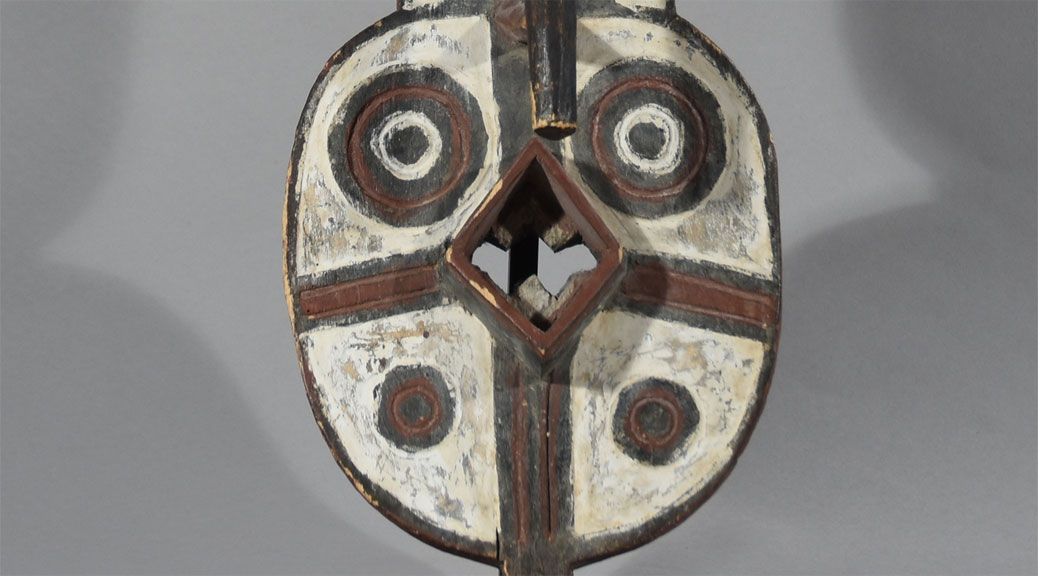 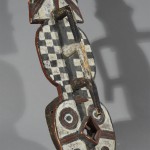 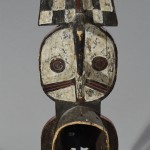 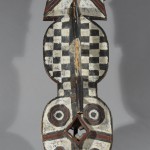 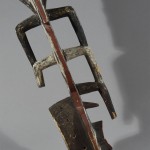 Plank masks are a relatively recent addition to Bwa artistic and ritual practice, and only a few Bwa communities located in Burkina Faso use them. During the performance, the dancer will hold the mask in his hand and from time to time rotate it so that both sides will be seen. Lineages control the design, production, and performance of the masks, which represent characters in family myths. This diminutive mask is a superb example of a Bwa variation on the plank mask form. The deepness of its incised details attests to the mask’s age and high quality. This type of mask was created to be used in perfomances in honor of a specific ancestor who was a dwarf. As the legend is told, long ago a Bondé woman gave birth to a son who never grew bigger than a small child. Despite his size, the dwarf was a masterful hunter who spent long periods of time alone in the forest. Advanced in age the dwarf lay on his deathbed, he asked his family to commemorate him by creating a miniature plank mask. Such masks continue to be performed by the Bondé clan today. Like all classic Bwa plank masks, this one includes abstract graphic patterns that can be interpreted in various ways depending on the viewer’s depth of knowledge.

The mask’s face is disk-shaped with a round protruding mouth and deeply incised concentric circles indicating eyes. Above is a hooked protuberance that may represent the circumcised penis of an initiate or the beak of the magically endowed hornbill bird. Below the eyes are incised lines representing facial scarification. The large diagonally intersecting cross on the central part of the mask’s plank also represents scarification, specifically a mark that is the prerogative of individuals who have been taught the secrets of their clan’s masquerades. The checkerboard pattern on the plank’s backside represents the black and white hides that elders and initiates sit on during masked performances, and symbolizes the separation of light from dark, good from evil, female from male and of knowledge from ignorance. The crescent that crowns the plank represents the crescent moon that shines during masquerades. (Source: The Art Institute of Chicago, where one of the few comparable Bwa masks of this style exists).

Provenience: Danish private collection by a deceased collector. The heirs believe that it was either acquired directly from Lau (Laurence) Sunde’s collection in Copenhagen, which dates back to the 1940s, or Lau (Laurence) Sunde was an adviser to the collector.
Sunde had an “Etnografica” boutique in 1948,that became recognized among collectors as the most specialized boutique of its kind at the time. Tribal and oriental artefacts were purchased from private collectors as well as at auctions in Paris, Amsterdam and London, among other places.