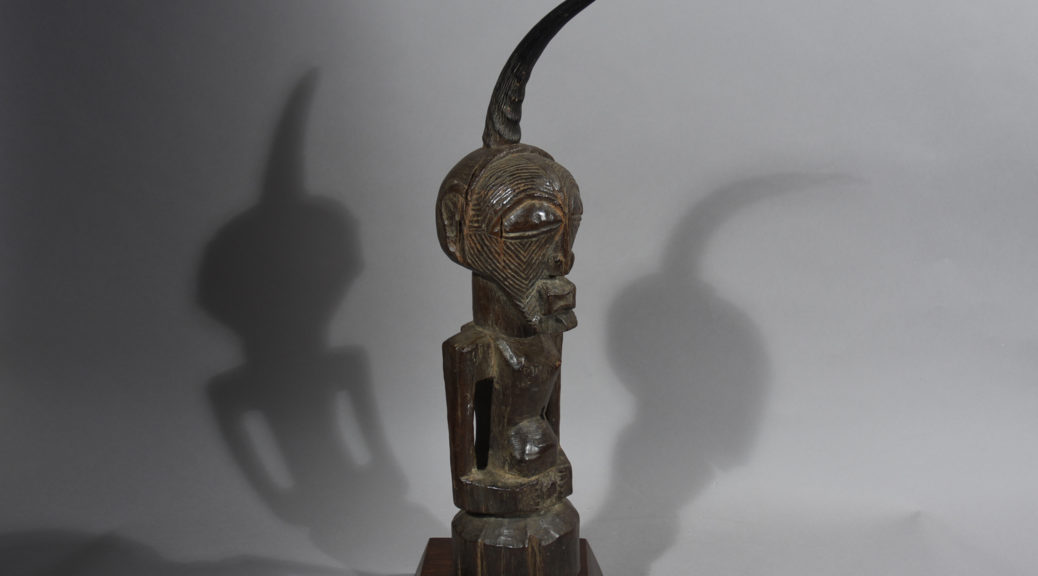 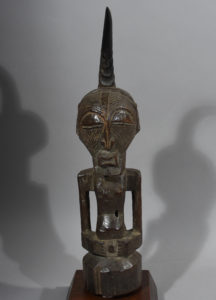 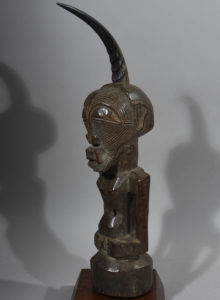 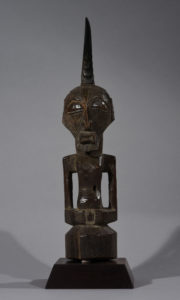 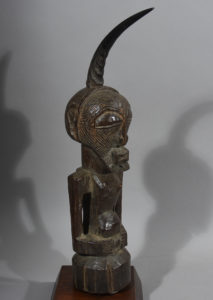 This impressive male fetish figure originates from the Songye, in the southern part of the Democratic Republic of the Congo. The piece features a horn on top of the head and this statuette was intended to heal, protect, bring good luck fertility.

A masterpiece of a figure carved in very heavy, dark brown almost black, heartwood in a distinctly cubist style. Typically, the arms are along the body and hands are placed on each side of the abdomen. The hole in the left side of the chest ends in a cavity that certainly contained magical powers. The fetish is firmly planted on a thick cylindrical base that is eroded in some places. The works of Songye sculptor-diviner craftsmen (nganga) are often used within the secret societies during various ceremonies. As a result, the Songye pantheon is full of powerful, menacing, exuberant, mischievous, unruly, and sometimes terrifying characters.

During the 16th century, the Songye migrated from the Shaba area, which is now the southern part of the Democratic Republic of the Congo. Their history is closely linked to the Luba’s, to whom the Songye are related through common ancestors. Having waged war against one another for a long time, the Songye and Luba later formed an alliance to fight the Arabs. They settled on the left bank of the Lualaba River, on a savanna and forest-covered plateau. Divided into many subgroups, the 150,000 Songye people are governed by a central chief assisted by innumerable secret societies.

Songye Power Statues are among the African sculptures that can often be attributed to a particular artist. Since the groundbreaking exhibition Tentoonstelling van Kongo art in Antwerp in 1937, the sculptor’s oeuvre has been very influential on the West’s understanding of Songye art.

Of all the greatest African sculptural styles, the Songye statue is possibly the most diverse and difficult to sub-classify. Since the early 20th century, scholars have sought to establish a typology of Songye sculptural styles and regions. The scattered, decentralized reach of the Songye people, as well as the sculptors and the traveling nature of their products, have made the task even more challenging as it cannot be relied upon to document the location of a sculpture’s collection to indicate their origin, or the origin of the sculptor; there are known cases of sculptors moving from region to region, commissioned by foreign courts or neighboring countries, and of sculptures traveling hundreds of miles from their origin.

Therefore, the few Songye styles that can be clearly established are especially precious to the history of art. Using the pioneering technique of 19th-century European art history, art historian Giovanni Morelli and first adopted in the study of African art styles by the German scholar Hans Himmelheber, analysis and comparison of sculptural properties allow stylistic classification, with or without accompanying documentary information. In very rare cases, a group of sculptures share a set of features that are so formally distinctive and highly idiosyncratic that one must conclude that they are the creations of the same master sculptor.