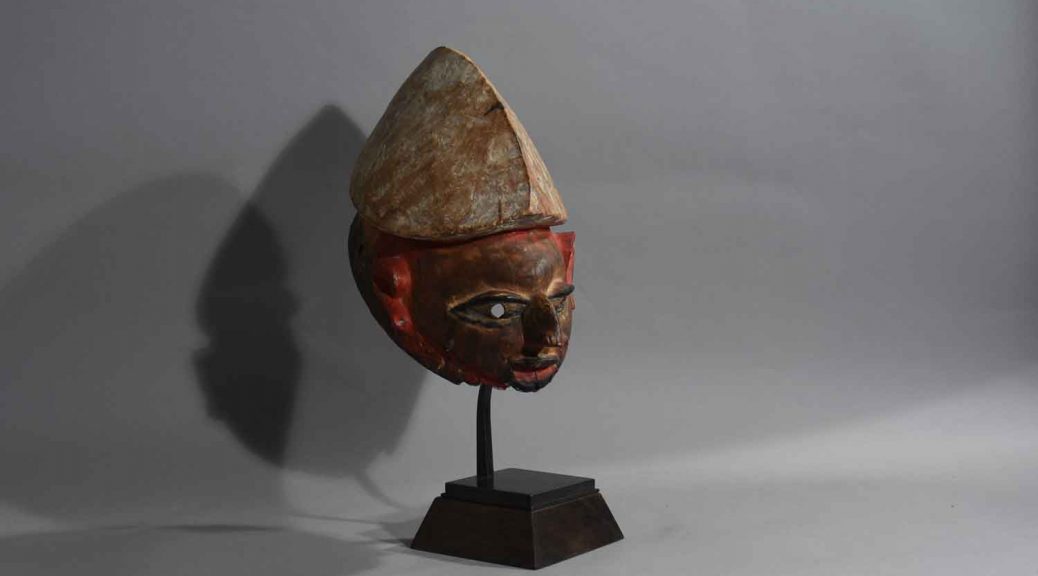 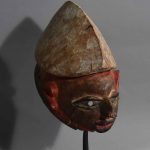 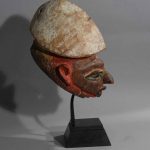 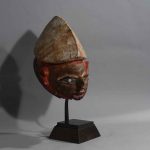 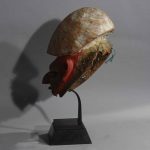 This is a remarkable and well carved Gelede mask from the people of Yoruba in Southwestern Nigeria. It is designed and painted along traditional lines, such as a helmet mask with high coiffure and a naturalistic human face. However, the face is exceptionally calm and well modeled with very strong and contrasting color in the face, eyes and ears. The hair is modeled as a tall, light triangular hairstyle. This is an unusual detail for this type of mask.

This mask is closely linked to the rituals performed by men’s societies within the Yoruba community. In particular, Gelede is intended to respect the spiritual aspects of femininity and to prevent this from damaging the society to which they belong. Enraged female spirits (Aje) can destroy entire communities; For this reason, they are placed by dancing performances, so their power is directed at the benefits of the group. Each village and territory had characteristic patterns of gelled masks that reflect a portion of their social organization or mythology. The mask would have been used with a large cloth costume that would have covered the mask dancer and hidden their identity.

Yoruba is the central Nigerian tribal group that originally came from a Hausa migration from the northeast in about 900 AD. A small kingdom – Ile Ife – was founded by Oduduwa, followed by great socio-political expansion in southwestern Nigeria, Benin and Togo. However, the city’s influence was felt far beyond these borders, and many smaller political entities were held during their turn. Communities were led by Oba (king) and various senates (Ogboni), and councils consisted of guild leaders, traders and the less aristocracy (related to Oba). Yoruba has an exceptionally rich and varied mythology, history and religious context, all of which are directly related to their artistic output; The Yoruba community, this grouped heritage is known as Itan, of which this striking mask is a part.

Condition: This is a wonderful African Red and Green Painted in layer Helmet

Provenance: Danish private collection. It is believed that this mask is acquired from Lau Sunde’s collection around 1950 to 1960.