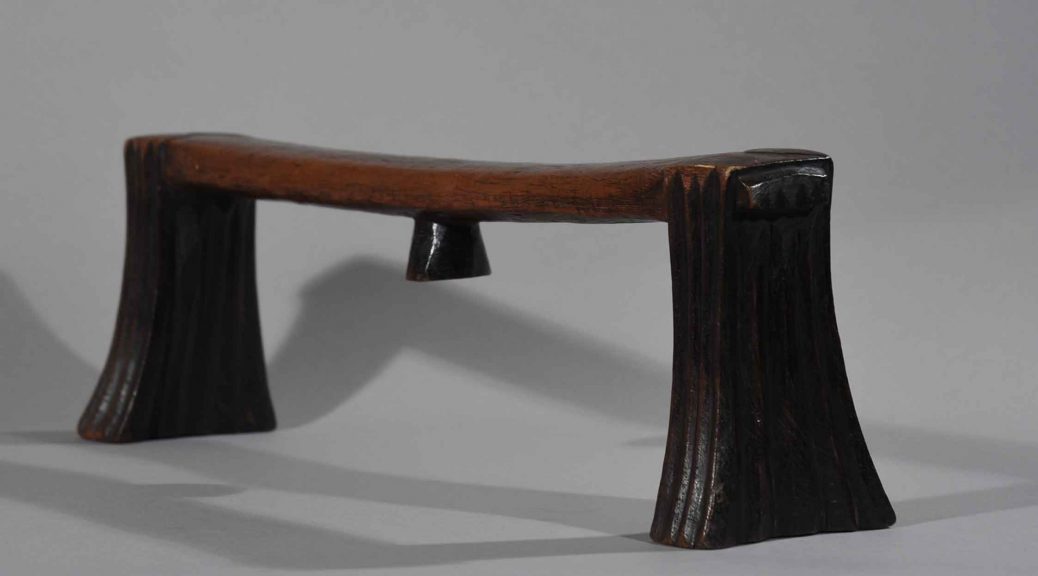 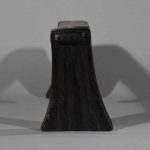 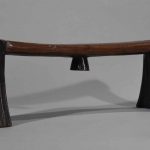 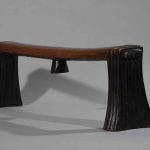 This elegant Swazi headrest is similar in style to the appearance of the Zulu headrest. Swazi headrests are usually 2 legs on either end that are commonly darker than the cross bar they support. The crossbar usually contains a lug pendant found in the center of the underside of this crossbar. The legs appear to be almost invariably fluted with vertical grooves, and in some examples, tails and leg-like forms are added at the short end of the headrest. There is no specific research known to have been done on Swazi headrest symbolism and usage, it is usually assumed that they must have followed a pattern similar as their southern neighbors, the Zulu, with whom they share many cultural patterns.

The Swazis of the Mountain Kingdom of Swaziland are a proud but peaceful people; occupying a small landlocked country in Southern Africa surrounded on three sides by South Africa and on the fourth by Mozambique.  Swaziland is the smallest country in the Southern Hemisphere with an area of only 6,704 sq. miles.  Swazis also live in the neighboring areas of Mozambique and South Africa.  Those in South Africa outnumber those in Swaziland.

Swazis have lived in Swaziland since around 1750.  Ethnically, Swazis are a part of the Nguni People Group, originating from the Great Lake areas of Central Africa.  Their ancestors were part of the general, gradual migration of Bantu language speakers from Central Africa.  The Nguni sub-group, Nkosi-Dlamini, broke from the main group and settled in Mozambique, eventually moving into the area known today as Swaziland.

From the Nkitsini area of Southern Swaziland. This area has many people descended from Zulu refugees of king Shaka’s wars. Only a few such headrests were collected and are now a very rare find.