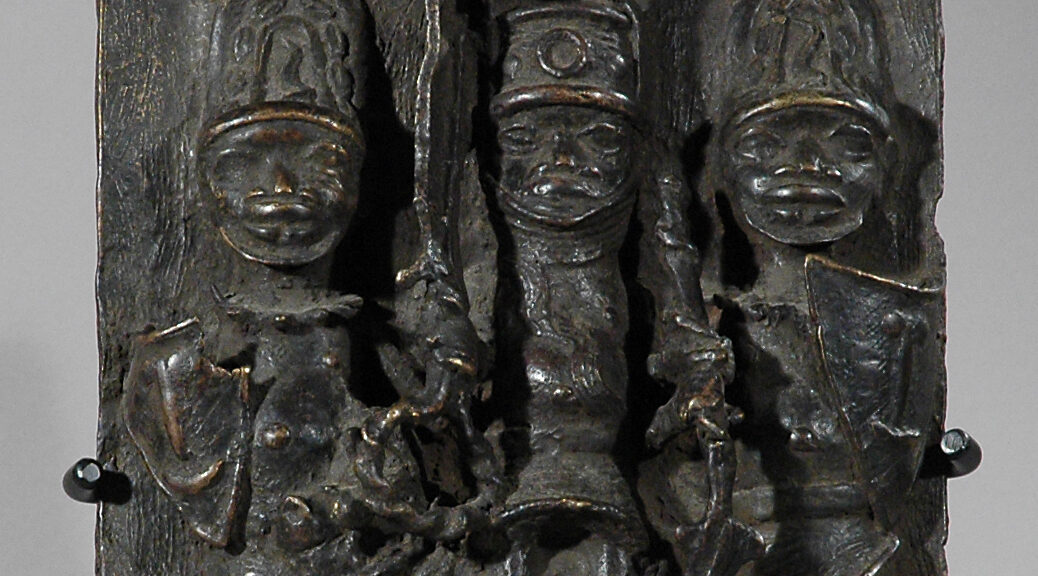 Perhaps the most valuable and remarkable objects made by the Benin craftsmen are the bronze/copper plaques that were cast in sections, assembled, and nailed to the walls to mark the achievements of the Obas. These are a perfect history of the palace system, dating from the early 16th to the 19th centuries, containing reference to all aspects of courtly life and events such as the arrival of Portuguese troops. There were once thousands of these objects, but the majority were taken as booty by British soldiers and were even auctioned off in Southampton docks after their return to England. As a result, many have vanished, and the remaining examples are very rare (about 900 are known). There is stylistic drift between the earliest and the latest examples.

The current example is believed to date to the very end of the 19th century and is therefore contemporary with the European invasion and enormous social changes wrought in the Benin polity. The figures are in comparatively low relief, with relatively little addenda after the original casting. depicted in 17th century examples. The two guards seemingly belong to different regiments or divisions, as indicated by their different headwear. The fact that the figure to the right of the panel appears to be holding the bridle of the horse hints at a distinct role for this individual. They are wearing identical leopard-branded tunics, which were designed to intimidate their enemies in battles.

Condition: This plaque has despite age no damage and probably been placed out in the open since it is covered by a thick becomingly layer of dark green verdigris.