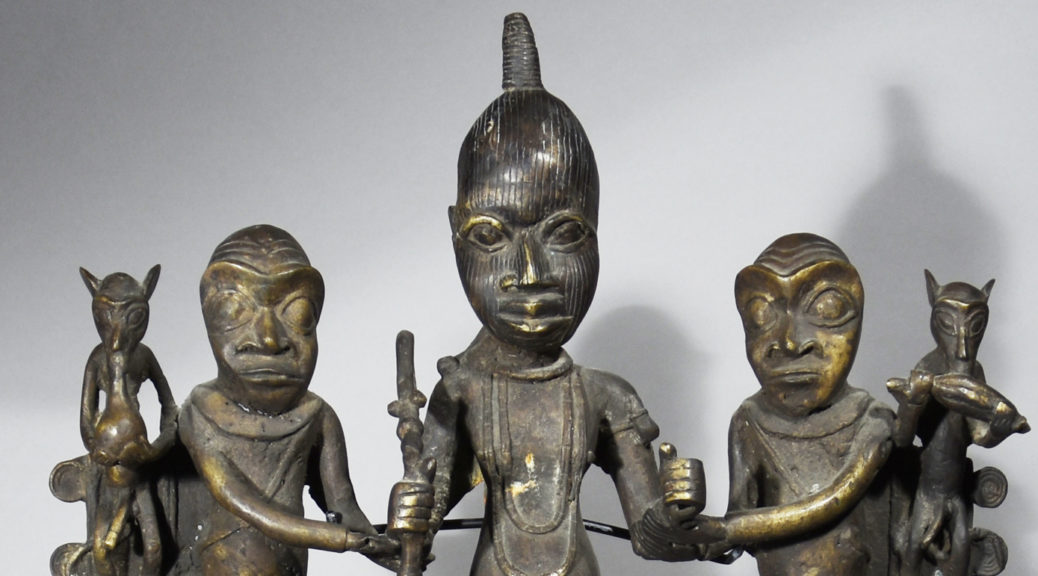 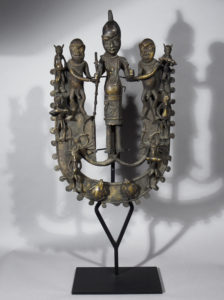 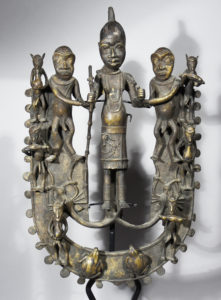 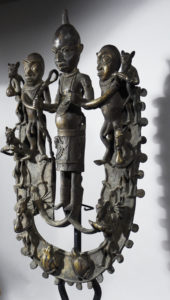 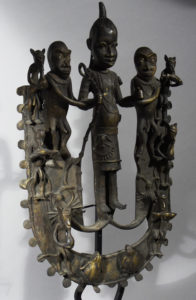 The focal point of this unusual U-shaped relief is an Oba (king of Benin) supported by two attendants, or enobore. Presumably, the elongation of the Oba’s legs in the form of hingemouth fish (cf. Fagg, 1963) is meant to emphasize his divinity, for the Oba depicted is 14 th -century Oba Ohen, who, after becoming paralyzed, explained his affliction as the consequence of having metamorphosed into the sea god Olokun. According to another legend, he was not the god himself, but his son, who came ashore from Olokun’s sea kingdom to rule as Oba.

Assuming that there is a connection between the alleged hingemouth fish that end just under the feet of the chieftain and the clearly-trembling legs of the two enobore, “quiverfish” or “quivering catfish” is probably a more appropriate appellation (cf. Luschan, 1919). Indeed, the entire, naked lower bodies of the enobore quiver and quake. Whether this is meant as a sign of their awe and reverence or holds some other meaning can only be guessed. The six monkey-like figures depicted on the right and left sides of the plaque are especially interesting: uncommon for Beninese bronzes, their inherent meaning to the work is still unclear.

In a very similar relief located in Museum Benin, Frank Willett has detected characteristics of Ife, Benin and Tsoede bronzes – and thus an indication of interaction amongst and correlations between the three styles. The stylistic commingling is apparent in this relief, but a direct reference to Ife can at most be found in the decorative scars in the Oba’s face. The heads of the central figures can be unequivocally attributed to Benin, and the monkey-like figures with their contorted legs to a style that developed east of Benin – potentially in Tsoede (central Nigeria) or even further east in Cameroon. There’s also a connection to the Cameroon Grasslands, where bronze casts were made starting around 1700 and where similar figures appeared in the 19 th century, at the latest.

Such so-called triads can be counted amongst the most important depictions of the king and are always re-adjusted when the Oba makes a public appearance. He is portrayed on plaques supported left and right by his attendants, sometimes with human legs, other times with catfish legs, symbolic signs of his role as divine king. In the latter incarnation, he represents both Oba, ruler of the kingdom of earth and humans, and the sea god Olokun, ruler of the kingdom of the oceans and god of fertility and plenty.

The meaning of the hierarchical composition of this plaque is widely contested. In the Viennese Catalogue, Barbara Blackmun presents two different interpretations. The first is based on a legend according to which Oba Ewuare (ca. 1440-1473) supposedly inherited the coral regalia of the god Olokun in connection with the reorganization of Benin’s capital. As Ewuare donned the beaded vestments, he supposedly felt the immense weight of the crown as    a symbol of the burdens of divinely-ordained rule and thereupon asked his people – the Edo – for help. According to the interpretation based on this legend, the triad thus symbolises the Edo’s responsibility for supporting the Oba in his duties. In a second interpretation, on the other hand, the triad is seen as a caution against supernatural resources meant to remain off-limits to mortals, expressed through the number three, which was said to be a sinister number employed only for cautionary and similar purposes.

Provenience: This bronze figure comes from a Danish private collector who originally acquired it from an Italian collection.