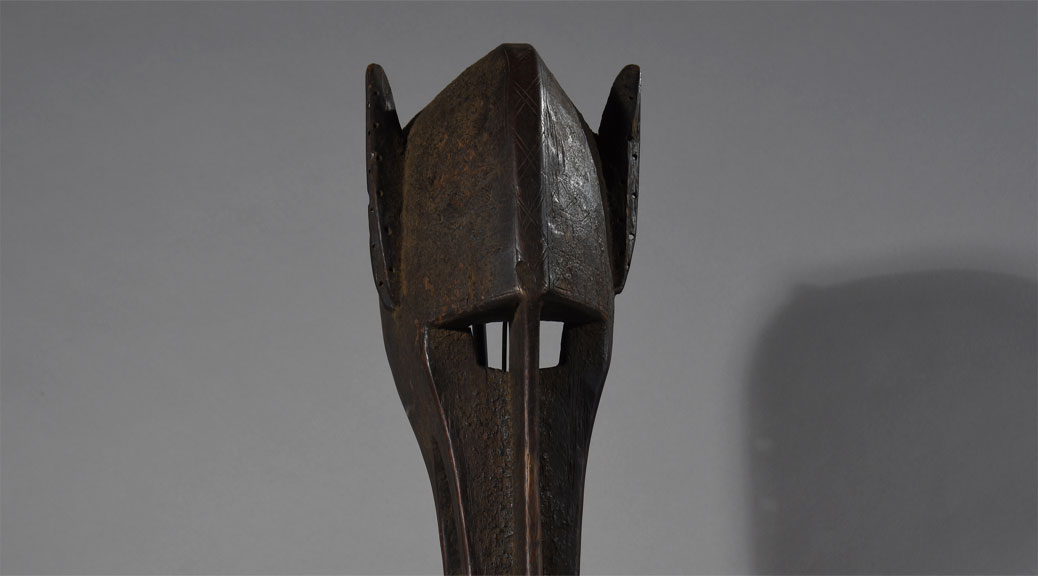 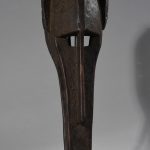 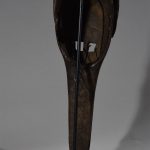 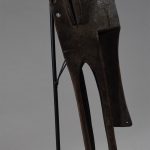 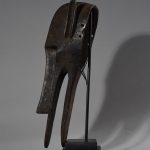 This zoomorphic dyadyomini ‘Fox’ mask originates from the Dogon people of Eastern Mali and represent one of the 80 masks types of the tribe.  It is an old carved dark-brown-colored wood mask, with ‘fox ears’, deep-set, square eyes and narrow nose. Mouth and chin are long and slim. A fine piece with very good usage patina on its surface, on the edges and especially on the inside at the back.

The Dogon is an ethnic group mainly located in the administrative districts of Bandiagara and Douentza in Mali, West Africa. The precise origins of the Dogon people, like those of many other ancient cultures, are not yet determined. Their civilization emerged, in much the same way as ancient Egypt. Around 1490 AD the Dogon people migrated to the Bandiagara cliffs of central Mali. There are approximately 700 Dogon villages, with an average of 400 inhabitants. The tribe’s folk call themselves ‘Dogon’ or ‘Dogom’, but in the older literature they are most often called ‘Habe’, a Fulbe meaning ‘stranger’. The Dogon have been described as the most studied and least understood tribal group in Africa. Their history, technology, cultural wealth, art and even oral legends are among the most complex in Africa, not least because the policy is in fact essentially artificial, comprising various sub-units that were grouped together on the basis of propinquity under the colonial administration. They are excessively prolific in terms of artistic production, not least because they have mastered all the main materials that are used in traditional African art; figures in stone, iron, bronze/copper and of course wood are all known, in addition to cave/rock painting and adaptation of more modern materials.

The Dogon people are known or share stories of their unique culture: dama mask dances, fox divinations, and other aspects of their unique daily life. Ritual is an integral part of the Dogon culture. Their cultural rites reflect awareness of the necessary harmony between the human spirit, the land, and surrounding animal life. One of example of how this balance unfolds can be seen in the fox divination ceremony, a rite we were able to observe several days after we arrived in the Dogon village of Yougou Piri.

“One evening, as the sun began to set, a Dogon priest called a diviner, traced an intricate drawing in the ochre sands that lie at the foot of Bandiagara Cliffs. A series of six connected squares and an elaborate set of symbols were drawn in a pattern that represent the potential futures of the family, the village, regional peace and harmony, life and death, and the wishes of God. The diviner next placed tiny sticks in the sand panels, representing God and the family. Several “I”-shaped tracings symbolized peace and death. Small heaps of sand with minute holes represented other concerns: harmony within the village, illness, next season’s harvest, even one’s own mortality. As the diviner priest drew the patterns into the sand, he chanted to invoke the sacred fox to come weave a path of prophecy for his village across his creation.

The Dogon priest finished his chant as the last light of the day lingered in the western sky and then disappeared. The priest returned to his village. Nightfall invited the fox to visit the sacred Dogon markings.

At dawn the following day, sunlight traced the shadows of the fox path across the sand drawing. Indeed, the fox had visited in the night and with its tracings had foretold the future of the village of Yougou Piri. With these fortuitous markings, the fox had symbolically acted out the ritual of an oracle, a Dogon tradition that keeps life in balance for yet another year.”

Condition: In spite of diligent use and age this mask is in a very good condition. Almost no cracks or damage. Originally colored, wool threads and tassels were inserted in the ears and nose; however, they are gone.