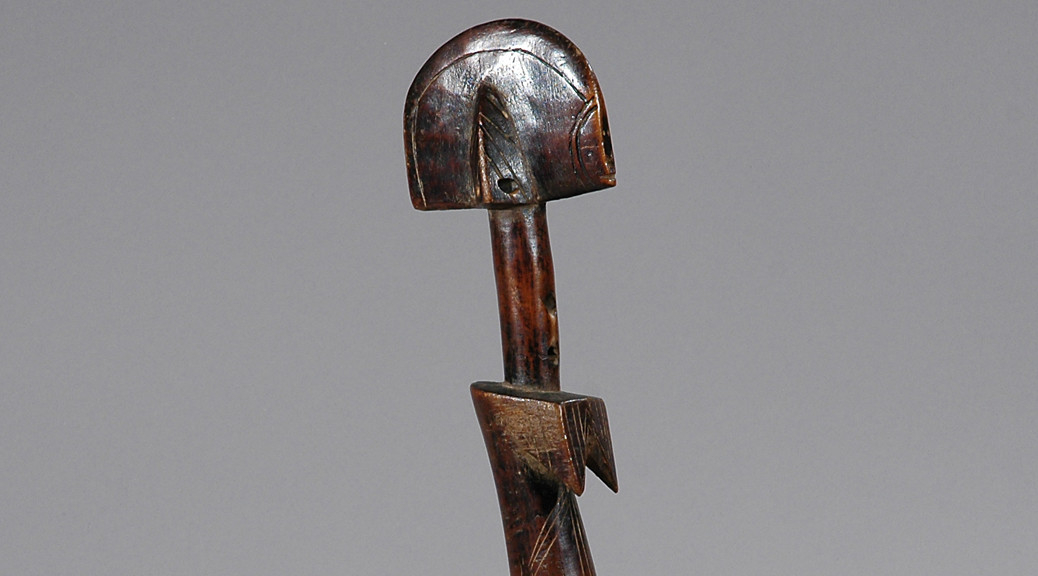 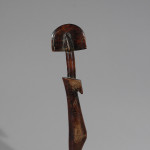 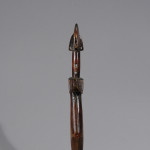 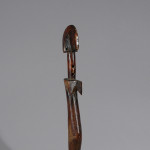 This tall fertility doll with a fine honey brown patina is carved from one piece of wood by an artisan of the Mossi tribe. As is characteristic of Mossi dolls, this example is carved in an abstract manner with a long torso, fan shaped narrow head, narrow face, and long body. The doll also represents an adult woman who possesses mature breasts indicating that she represents the fulfillment of motherhood. Scarification patterns on the body that traditionally mark passage to adulthood are also represented by carved patterns. Mossi dolls are typically carved by male blacksmiths and are given to girls for play and the attainment of fertility. African girls call dolls such as this biiga (“child”). A child carries the doll about with her, tucking it into the waistband of her skirt, and pretends to feed, wash and groom it. Sometimes it is adorned with beads, cowrie shells, dressed with pieces of leather or cloth, and the girl might bring it wildflowers. In the market, a girl may place her doll on the edge of a merchant’s mat and expect to receive a small sample of the wares—a few peanuts, a pastry, or a piece of fruit.

Mossi dolls are also the focus of rituals associated with motherhood. When a young girl displays her doll to older women, they may respond, “May God give you many children.” At festivals, if a child gives her doll to an adult to hold, it is customary to give the child a small present when giving the doll back. Other rituals include the use of dolls to ensure fertility in marriage (accomplished by giving the doll a name). Handling the doll with care is seen as auspicious for childbearing and survival of children.

Before the marriage ceremony, a young woman carries the doll on her back to the market, and a few days after marriage, she is given some straw in place of the doll and asked which sex her first child will be. Mossi dolls are passed down through female generations, and before a woman gives birth, she washes the doll she played with in childhood before washing her own baby. Similarly, the first drops of milk are given to the doll, and it is again carried on the mother’s back before the infant is placed there for the first time. According to reports culled by anthropologists, these rituals were to ensure that the newborn infant’s soul enters the world of its parents, called yisa biiga, or “to call the child,” and “to prevent the child from returning,” or gidga ti da biiga lebera me, to the world of the ancestral spirits.
Women who remain childless after a few years of marriage use the dolls for votive purposes, adorning them with cowry shells and carrying them everywhere while expressing their wish for a child.