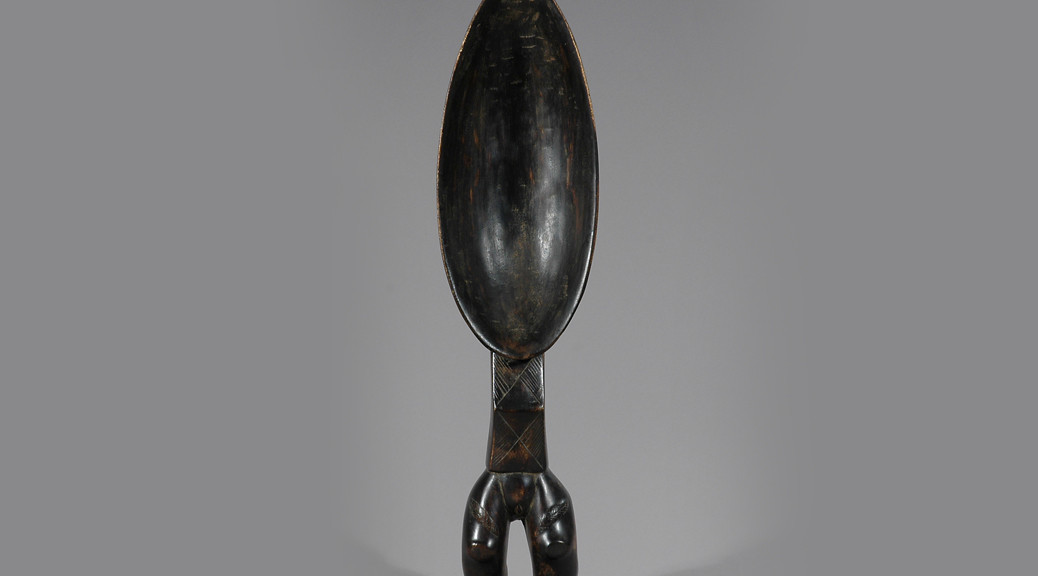 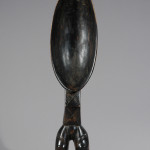 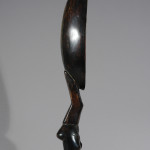 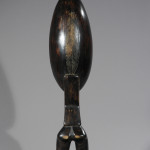 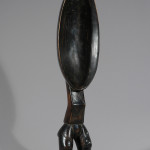 This superbly rendered spoon shows signs of great age with its patina, dark brown and layered blackened surface and rounded forms. This level of sophistication as a work of great abstract sculpture is rare in African art. The suggestion of human form in the muscularity of the legs is here combined with an elegant use of repeating linear motifs to break the sensuousness of the rounded volumes.

Large ceremonial ladles are carved to honor a particular Dan woman from each village quarter who has distinguished herself among her fellow women by generosity and hospitality. At special feasts, she dances with the ladle and directs the distribution of rice to those assembled. An elderly honouree passes the ladle and the honour on to the one she sees fit as a successor.

Artists in Dan communities of the Guinea coast have mastered the art of carving impressive, large wooden spoons that are virtuos works of sculpture. The spoons are known by many names, including wake mia or wunkirmian, which roughly translates as “spoon associated with feasts.” The spoons range in size from a foot to two feet and have one or (rarely) two parallel bowls. The handle of the spoon is always decorated and often is related to the human form and often feature a pair of legs like this example.

Among the Dan, the owner of the spoon is called wa ke de, “at feasts acting woman.” It is a title of great distinction that is given to the most hospitable woman of the village. With the honor, however, comes responsibility—the wa ke de must prepare the large feast that accompanies masquerade ceremonies. The excellent farming abilities, organizational talents, and culinary skills of the wa ke de are called upon to properly welcome and celebrate the masquerade spirits.

When a woman has been selected as the main hostess of such a feast, she parades through town carrying the large spoon as an emblem of her status. On the day of the feast, she dances around the village dressed in men’s clothes because “only men are taken seriously.” She carries with her a wunkirmian and displays a bowl filled with small coins or rice. With help from her numerous assistants (usually female relatives or friends), she distributes grains and coins to the children of the community while dancing and singing her special shrill song. The deep belly of the spoon from which this bounty is dispensed becomes the symbolic body or womb of the female figure. The event creates a profound visual analogy that honors the hostess, and women in general, as a source of food and life.

In addition to being emblems of honor, wunkirmian also have spiritual power. They are a Dan woman’s chief liaison with the power of the spirit world and a symbol of that connection. Among the Dan, the wunkirmian have been assigned a role among women that is comparable to that which masks serve among the men. In many instances, wunkirmian are featured in the same ceremonies with masks, tossing rice in front of them as a blessing while they proceed through the village.(Source: Metropolitan Museum of Art)

Click here for more information about the Dan people