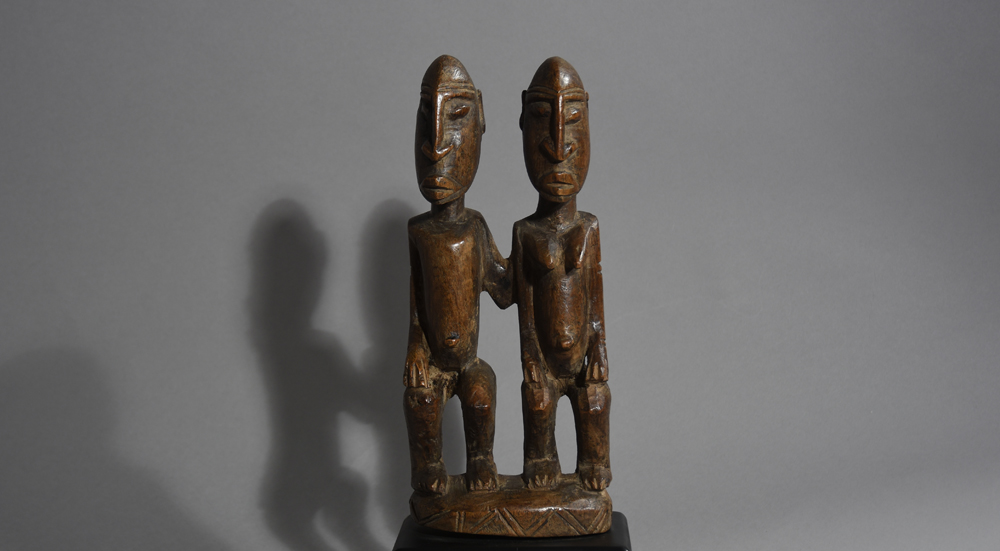 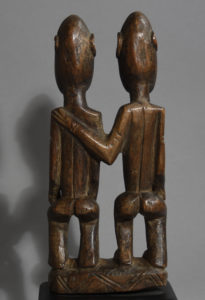 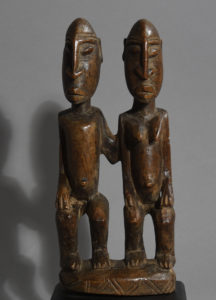 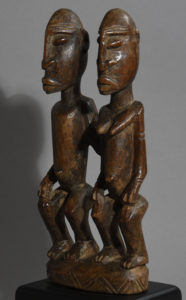 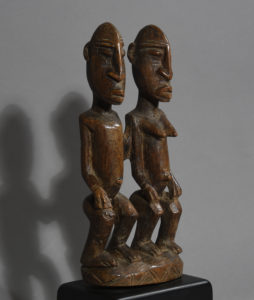 This beautifully balanced ‘Nommo sculpture’ of a harmonious couple. Carved from hardwood in the strict, clear, angular and abstract ‘bombou-toro style’. With round ears, almost arrow-shaped, long noses, slit eyes, wide-mouthed lips, slightly bent knees. The man gently holds his left arm behind the woman’s back and the hand resting on her left shoulder. His right hand and both her hands resting on the knees.

According to the Dogon origin myth, God created the ‘Amma’ couple, ‘Nommo’. As a ‘culture-maker’ for humans. In the sculptural art of Dogon, these ‘Nommo’ are often made as pairs of figures. Or even a bisexual hermaphrodite, it is a man and woman in a single figure. These ‘Nommo figures’ are placed on altars and sacrificed ritually (with millet and others). However, this is a stylistically very beautiful example of a classic ‘Nommo’ pair.

Dogon places these wooden figures on many different kinds of altars, most of which are dedicated to ancestors, either real or mythical. Although figurative sculptures, called doughs, are perhaps the most interesting types of Dogon art, varied in form and rich in images, they are also among the least documented. Few altars are described in detail or illustrated; those that have been described do not suggest any consistent pattern that links a particular style of a figure or a certain attitude or gesture to any kind of altar.

The Dogon ethnic group is mainly located in the administrative districts of Bandiagara and Douentza in Mali, West Africa. The exact origins of the Dogon people, like many other ancient cultures, are yet to be determined. Their civilization arose in much the same way as ancient Egypt. About 1490 AD migrated the Dogon people to the Bandiagara cliffs in central Mali. There are approximately 700 Dogon villages with an average of 400 inhabitants. The people of the tribe call themselves ‘Dogon’ or ‘Dogom’, but in older literature they are often called ‘Habe’, and a Fulbe meaning ‘alien’. Dogon has been described as the most studied and least understood tribal group in Africa. Their history, technology, cultural wealth, art and even oral legends are among the most involved in Africa, among others, there are many ‘references’ to Egypt, with which the Dogon people have had a historic trading relationship in the form of supplies of salt. *

In recent times, many changes have occurred, not least because the policy is in fact essentially artificial and consists of various subunits that were assembled on the basis of a trend during the colonial administration. The Dogon breed is excessively productive in terms of artistic production, not least because they have mastered all the major materials used in traditional African art; Figures in stone, iron, bronze / copper and of course wood are all known, in addition to hollow / rock painting and adaptation of more modern materials.

Condition: Despite age, this figure appears with its dark-brown glow with no cut or insect bite (which owes an early polish with an insecticidal oil).

Provenience: Danish private collection of an artist living in Paris in the 1950-60th and bought this figure from Parisian gallery (‘at a very high price’).

Recommended reading – Robert Kyle Grenville Temple (born 1945) is an author best known for his pseudoarchaeology book The Sirius Mystery (1976). The book proposes that the Dogon people of Mali in West Africa preserve advanced astrophysical information which predates modern times, and that the Dogon tradition describes contact with intelligent extraterrestrial beings from the Sirius star system.