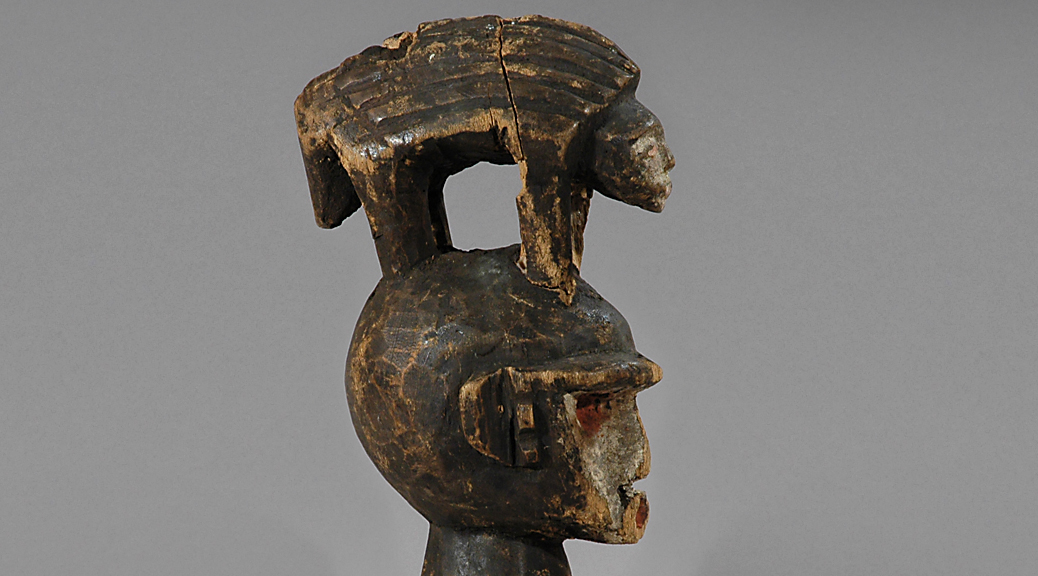 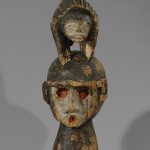 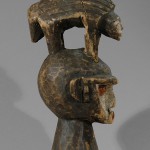 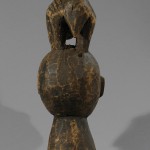 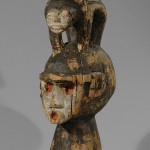 This fetish-like object is an assemblage of wood objects painted with kaolin.
A fetish is a statue or object with magical power, like an amulet, talisman or good luck charm. Common to many tribes was the belief that the fetishes acquired power through ritualistic carving and consecration, the addition of special substances and the recurring activation of its spirit by offering sacrifices and magic words.

Numbering 200,000 to 350,000, the Ijo people live mainly in the creeks and mangrove swamps of the Niger Delta area. Being fishermen and traders they depend upon the water for food and communication. The Ijo are divided into two groups: the Kalabari-Ijo, east of the Nun River, and the western or central Ijo, who live to the west and northwest of this river. The art of both groups is characterized by a schematized approach, whereby most works of the central Ijo evince a higher degree of stylization and abstraction than those done in the Kalabari regional style. Yet also found in the western area are more realistic masks in the form of fish or animals, which are worn on the forehead. However, the best known forehead masks of the central Ijo, which embody water spirits (owuamapu), contain depictions of human heads built up of geometric shapes and combined with zoomorphic or abstract elements. Besides ancestors and deceased local heroes, water spirits play an important role in the religious ideas of the Ijo. They believe that these spirits are like humans in terms of their strengths and weaknesses and that before their birth, human beings live among them. Once born, the Ijo maintain contact with them through prayers in order to gain their favors. Celebrations in honor of the water spirits lasting several days are held annually, either at the beginning of the year or the time of high water, in order to gain the spirits’ goodwill and insure the group’s welfare. In the course of festivities various masqueraders embodying the water spirits perform, and the presence of the spirits, by whom they feel possessed, is manifested in the intensity of their dancing. The Ijo masks for the cults of the water spirits are made in the form of aquatic animals, especially hippopotamus and crocodiles.

Provenance: Danish artist private collection acquired in Paris in the 1970th. Bought by CHRISTA’S in 2007.