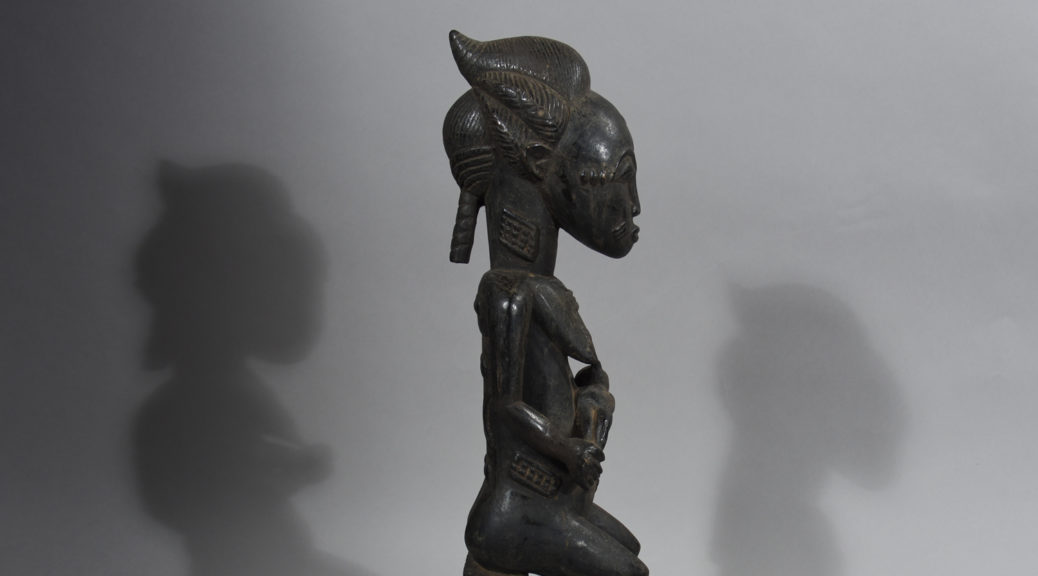 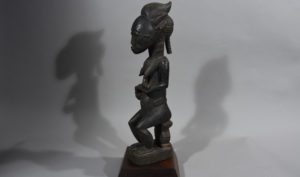 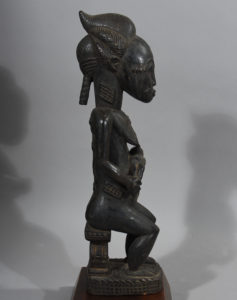 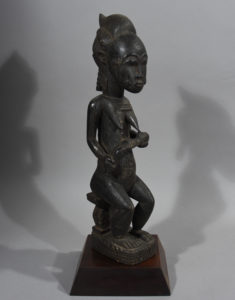 A magnificent and very beautiful, blue colored maternity figurine of the ‘asie usu or blolo bla’ type is of the Baoulé tribe which are part of an Akan people established in the Centre of Ivory Coast, in West Africa.

This beautiful shiny blueish patina with voluminous fine grooved coiffure, raised scarification marks holding a breastfeeding baby, representing the very ideal of female perfection in Baule culture, and this figure was probably carved as a wife from the other world. The fine scarification and well-tressed hair are marks of her beauty and made for a spirit husband, Blolo bian. According to Vogel, ‘these figures represent an ideal of womanhood, embodying not only physical perfection, but social, moral and intellectual achievement. Spirit spouse sculptures can be seen as a kind of opposite sex alter ego and are a fascinating case of the use of art in Africa for individual psychological relief. The Baule are one of a number of African groups who believe that before birth, human beings all had Blolo bla (spirit wife) and Blolo bian (spirit husband) spouses in the other world who can influence their lives. Baule artists and their nearby neighbors seem to be the only artists in Africa who traditionally carved figural representations of spirit spouses.

The Baule create art in several media, including wooden sculpture, gold and brass casting similar their Asante ancestors, and mask and figure carving, which have been greatly influenced by their Senufo and Guro neighbors.

Condition: Despite age this figure is in an excellent condition. No cracks or insect bites.

Literature: “For Spirits and Kings: African Art from the Paul and Ruth Tishman Collection”,
Edited by Susan Mullin Vogel