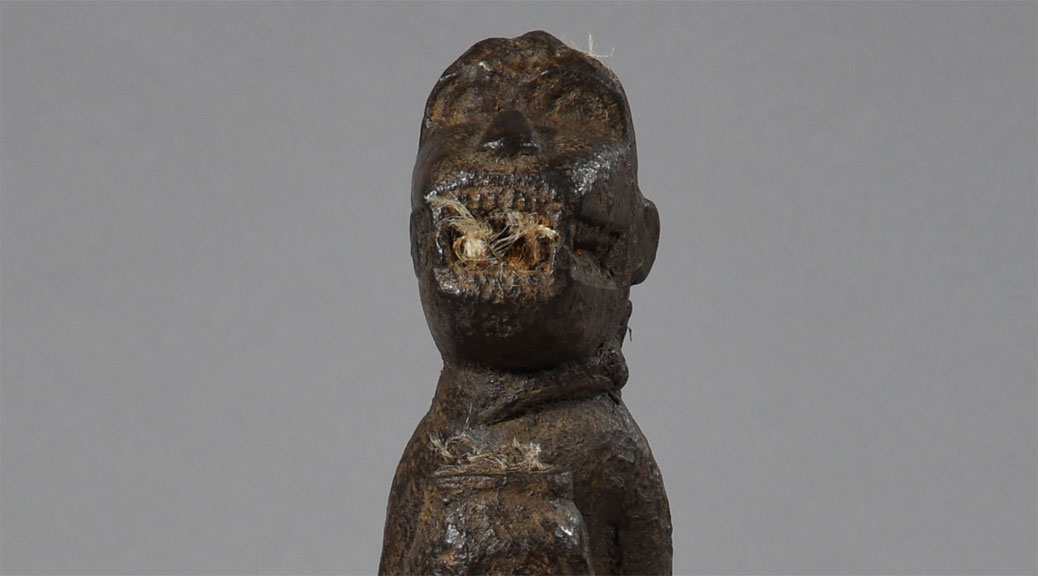 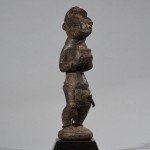 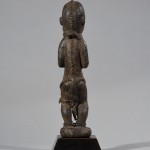 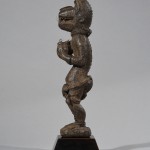 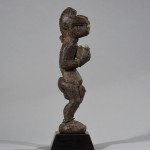 This zoomorphic Baule Embra monkey figure often known as Gbekre with dramatic prognostic jaw and sharp teeth and a granular patina resulting from sacrifices. Standing on a circular base the enlarged feet supporting bent legs beneath a cylindrical torso framed by bent arms and hands joined together holding a cup or a pestle used to hold an egg. In this case, it seems as if the monkey has ripped a chicken and still have a mouth full of feathers.

On the back traces of scarifications are shown, partly encrusted blackened patina. The figure has a large encrustation of sacrificial material, a mixture of magical materials repeatedly poured over the head and body. The roughness of Gbekre expresses his nature as a spirit of the bush as opposed to the smooth serenity of village spirits such as spirit lovers or their highly finished ancestor figures (waka sana).The form of scarification has a peculiarity, instead of a thick encrustation, like it is typical for a lot of Gbekre and Mbra cult figures of this form. In addition, the folded loincloth and the neatly tied cravat with the knot in the neck and all the rings and bands show that the figure embodied the powerful and animal part of the human spirit, which the Baule believe, exists in each person and lives in the bush, this piece gives a terrific visualization of that spirit.

Sources differ on its role or function: some say it intervenes in the ritual of divination, others that it is a protection against sorcerers, or a protective divinity of agrarian rites, or a bush spirit. Owned only by trance diviners and certain families, the figure resides hidden outside under a shelter. The sculpture is said to feed on sacrifices brought from the bush and poured all over the figure, leaving it filthy and encrusted.

From head to toe, this piece has incredible features, lines and detail, and the feathers makes a dramatic and powerful statement. There are a few documented examples of these figures that embodied the powerful and animal part of the human spirit, which the Baule believe, exists in each person and lives in the bush, this piece gives a terrific visualization of that spirit.

“In Baule culture, cupbearing monkey statues, commonly known as “gbekre” since their first mention in 1900 by Maurice Delafosse, belong to the category of amwin, or “objects of power”. They were used by men-only initiation societies for a number of purposes, both functional – as a basis for prophylactic practices, linked to agrarian rites or to a form of divination known as mbra (Bouloré in RMN, 2000: 107 et Vogel, 1997: 221-230) – and iconographic, each type being designated by a specific term (aboya, mbotumbo, ndyadan, gbekre…).” Sotheby’s Horrific Baule objects, apparently mostly for Mbra, often incorporate actual skulls into wooden sculptures. In the Baule system, this type of objects is potent and the least likely to be publicly displayed.” – Susan Vogel, 1997:224

“Baule Monkeys are powerful objects, which are forbidden to be seen in public display. Monkey figures share stylistic features with the mens´s sacred masks, and have some of the qualities of secrecy and danger to women. They combine animal and human traits in such way that it is nearly impossible to separate them, and they have the prominent teeth and boxy muzzle typical of the masks. Both also receive sacrifical offerings directly on the sculpture, and are associated with the bush. Mbra monkey figures, for example are kept in the village, but “fed” with sacrifices in the bush.” – Susan Vogel, 1997:238

The term “gbekre” has long been used to designate the monkey figures of the Baule. In the book ‘Baule Monkeys’ Bruno Claessens tracked down the origin of this unfortunate appellation.

The word gbèkrè first appeared in a now little-known article written by Maurice Delafosse in 1897 for the Museum of Natural History in Paris[1]. Describing the animals indigenous to the Baule region, he noted that the baboon, Cynocephalus sphinx, was widely found throughout the area and was known as Gbèkrè or Wotoumo.

Under the heading of ‘religion and superstition’, Delafosse mentions the existence of two types of ‘idols’ in his Baule dictionary of 1900: waka akatya – in the form of a chimpanzee, and waka gbèkrè – in the form of a baboon; in both cases waka may be translated as ‘wood’. Akatya is not mentioned later and seems to have been forgotten, perhaps because the heads of so many such figures were indeed more reminiscent of a baboon. The same dictionary mentions two other uses of the word gbekre, namely the differently pronounced gbékré (mouse) and gbekre-sè(mouse box).

However, a better-known publication by Delafosse is at the root of the misunderstanding that has persisted to the present. In his article on the art of the Baule published in 1900, he identified gbèkrè as the ‘baboon god’ in the subsection entitled ‘Génies’. Consequently, every apelike Baule figure would be referred as gbekre (without diacritics) in the literature. As early as 1956, Holas wrote in the introduction to his article on Baule bowl-bearing figures that, owing to Delafosse’s 1900 article, such figures were wrongly described as gbèkré [6] (note, however, that Holas was also inprecise in his use of diacritics). Despite its having been long known to be erroneous, this term is still prevalent in 2016.