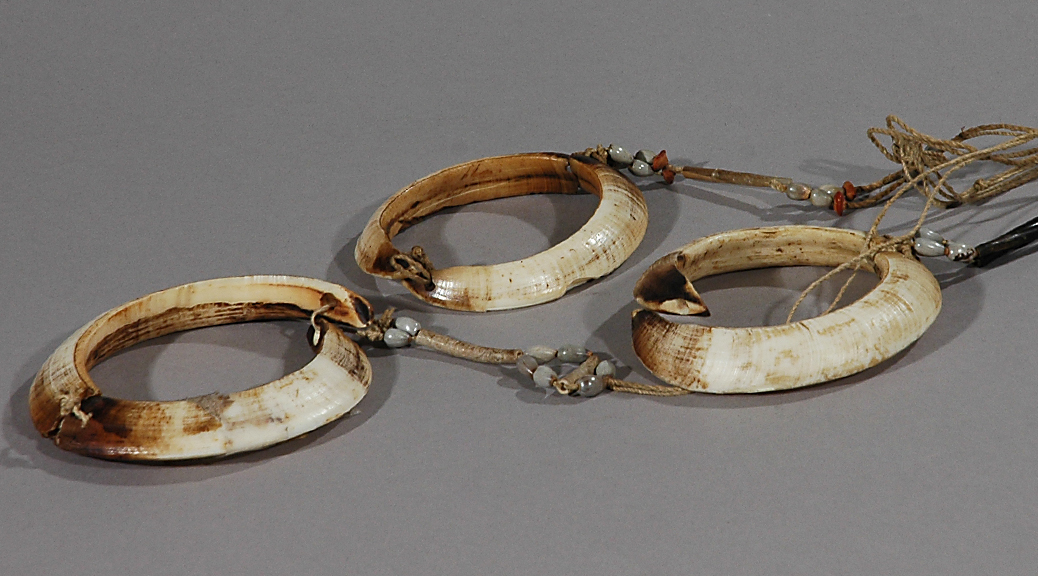 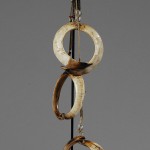 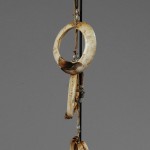 This necklace of boar tusk is from the Omanesep region in Asmat, the Western half of New Guinea Island, which is the Indonesian province of Papua.

In past headhunting days many items were used to remind the people in the village of the need to avenge a death. These items were collectively called etsjo pok. One of these was a necklace made of boar tusk. It was named for the person to be avenged, and was worn as a constant reminder. It could be worn by a family member of the deceased, or given to others. When someone accepted the necklace as a gift, it was understood that when the time came they would help the avenger in his attack.

Provenance: Collected in situ in 1984 by a Danish explorer and collector of Oceanic tribal art.

Geography
The Asmat occupy an area on the Western half of New Guinea Island, which is the Indonesian province of Papua, and covers roughly 10,425 square miles (27,000 km2).
To the north are the Maoke Mountains, with the island’s highest peak rising 16,500 feet and to the south west is the Arafura Sea. Asmat is located on a gentle alluvial plain that extends far out into the sea. Because of this, the coastal region is made up of mud and swamp with the water raising and lowering with the tide. During high tide, the sea can cover up to 1.2 miles (2 km) of land along the coast. Further inland the ground is higher and covered by dense jungle. There is an extensive network of wide and deep rivers running through the Asmat territory which create dangerous cross currents where they flow into the Sea. As there are no roads in the region, the people make use of the rivers and travel by canoe.

The Asmat live just a few degrees south of the equator, so there are no true seasons. The daily temperature all year ranges between 70º F (21º C) at night to 90º F (32º C) during the hottest part of the day. The rainy season in the eastern portion runs from April to June, and in the west from December to March. Yearly rainfall is approximately 200 inches (500 cm).