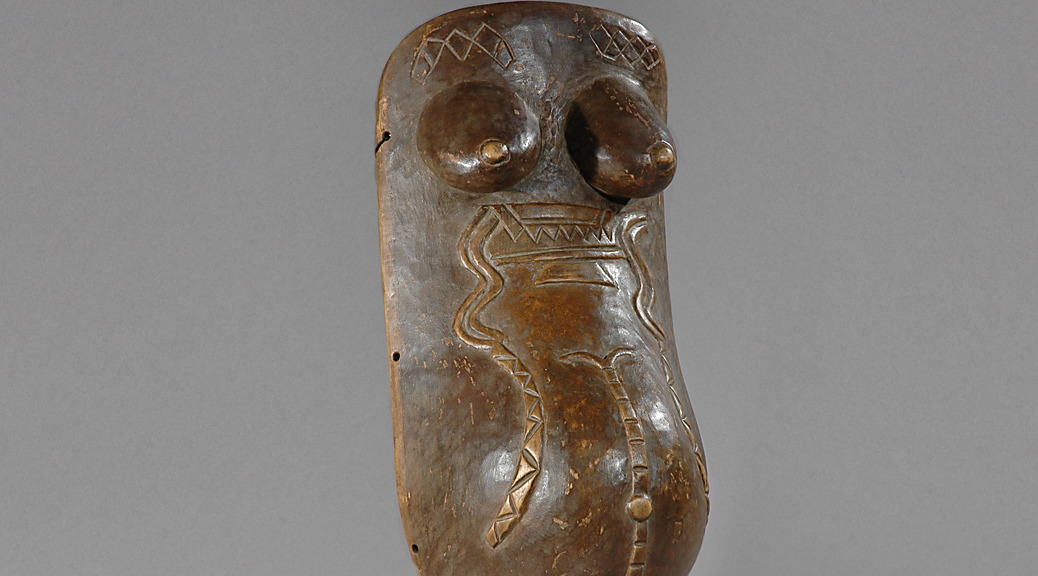 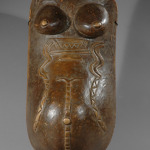 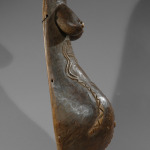 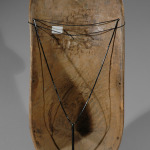 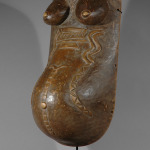 This special body mask, carved from wood with breasts and swollen stomach and adorned with Makonde scarification bars which are symbols of tribal pride and beauty. The body mask along with a matching female face mask is worn by a male dancer. He performs a mesmerizing dance that dramatizes the agonies of childbirth.

The Makonde people of southeastern Tanzania belong to the Bantu people who originally lived south of Lake Nyassa. These highly sensitive proud people who isolate themselves into small groups, are regarded with respect and sometimes a superstitious fear by other tribes. This is partly due to the fact that both Makonde men and women file their teeth to points and adorn their faces and bodies with elaborate tattoos. The women also wear large metal plugs in their top lips. The Makonde believe in ancestral and malevolent spirits who make their appearance during certain ceremonies and rituals. These ceremonies involve dancing, spinning and twisting on high stilts while wearing traditional facial and body masks and costuming to hide their true identity. One of the most important rituals is the initiation cycle. For a period of six months both boys and girls are placed into seclusion where they are taught the rules of adult behavior, sex and the rights and obligations of marriage. The coming out ceremonies at the end of the initiation rites include feasting, dancing and the masquerade of the Midimu spirit maskers. The female body mask is part of a special Midimu masker called the Amwalindembo.