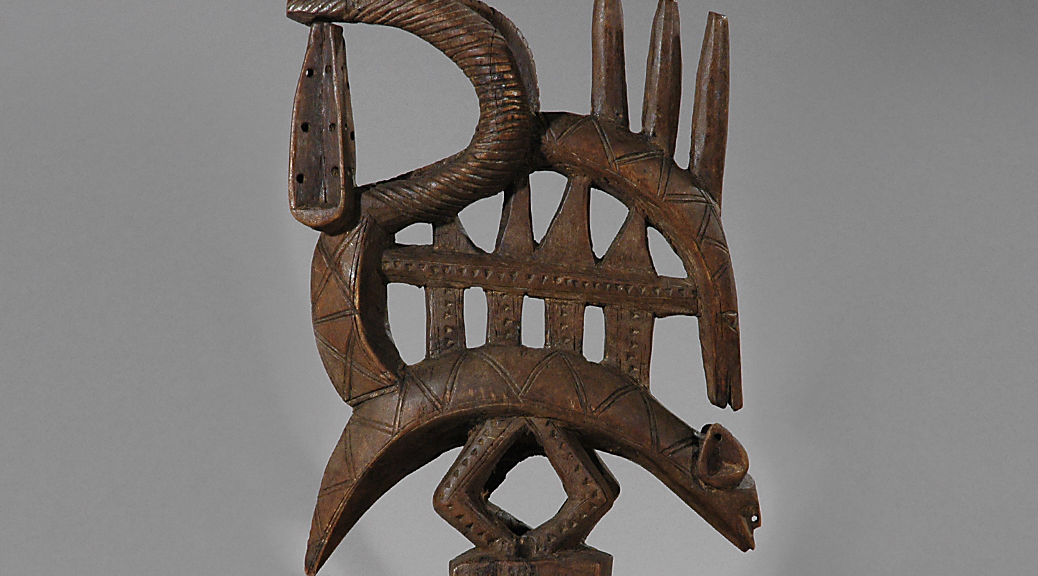 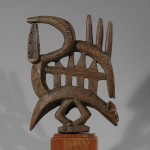 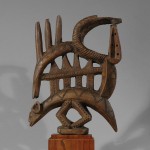 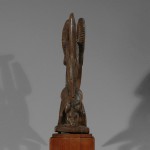 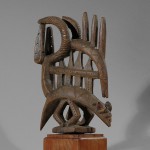 Bamana Chi Wara from Mali, represent and honour the mythological half man / half antelope hero who taught man how to cultivate the soil. They were danced in pairs and celebrate the union of male (sun), female (earth) and fibre costume (rain), signifying the cooperation needed for a successful harvest and community survival. They are worn as headdresses and danced as pairs. There are three types of Chi Wara headdresses; the familiar vertical style of the eastern Bamana, the more realistic horizontal style of the northern Bamana and the varied and more abstract forms of the Southern Bamana.

This headdress represents the comparatively more abstract type of Chi Wara mask; which is found primarily in the Ouassoulou region of the south-western Bamana area. It shows a typical combination of three different species of animal – the aardvark, the pangolin, and the roan antelope.

The base of such headdresses is invariably formed by a representation of the aardvark. Here it is clearly recognizable from the simplified but still relatively naturalistic elongated head, pointed ears, arched body, and bent legs. The structure on the aardvark’s back, represents a pangolin in the rolled up position it assumes in defence and to protect its young. This stylized figure is surmounted by two vertical elements and by the horns and long, pointed ears of an antelope. All three animals are symbolically linked in the Bamana farming community with tilling the soil, including its sexual connotations. The aardvark and pangolin, especially, are associated with the growth of sorghum, the Bamana’s most important grain crop.