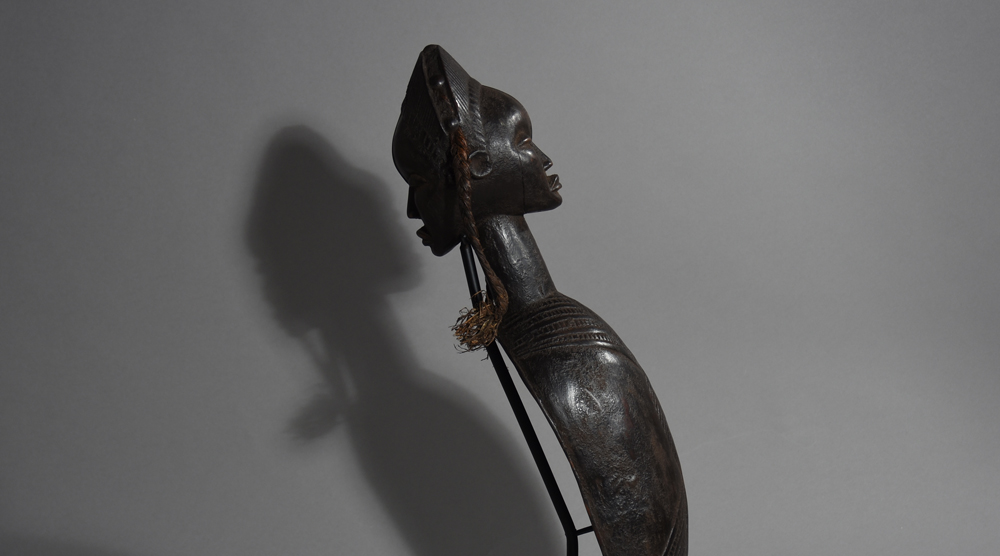 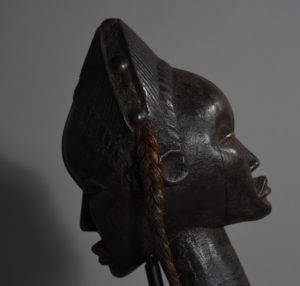 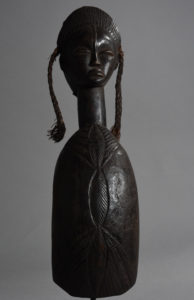 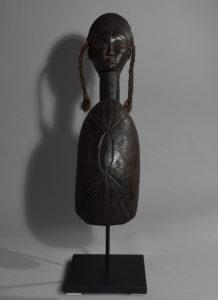 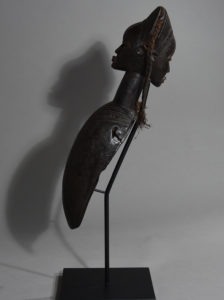 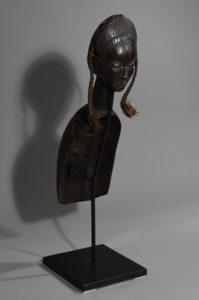 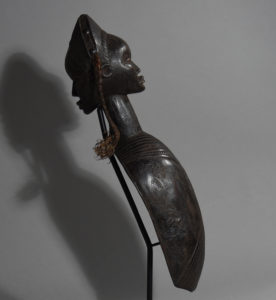 This beautiful wooden spoon decorated with two female faces on handle derives from the artists in Dan communities of the Guinea coast who have mastered the art of carving impressive, large wooden spoons that are virtuoso works of sculpture. The spoons are known by many names, including ‘wake mia’ or ‘wunkirmian’, which roughly translates as “spoon associated with feasts”. The spoons range in size from a foot to two feet and have one or (rarely) two parallel bowls. The handle of the spoon is always decorated and often is related to the human form.

In this case this spoon is formed as two female heads with finely arranged coiffures ending in a pair of finely shaped braids. The faces are typical, beautiful Dan-woman expressions with the characteristic closed eyelids, the finely shaped nose and the sensually shaped lips.

Among the Dan, the owner of the spoon is called ‘wa ke de’ (translated: “at feasts acting woman”). It is a title of great distinction that is given to the most hospitable woman of the village. With the honor, however, comes responsibility—the wa ke de must prepare the large feast that accompanies masquerade ceremonies. The excellent farming abilities, organizational talents, and culinary skills of the wa ke de are called upon to properly welcome and celebrate the masquerade spirits.

When a woman has been selected as the main hostess of such a feast, she parades through town carrying the large spoon as an emblem of her status. On the day of the feast, she dances around the village. Many dressed in men’s clothes because “only men are taken seriously.” She carries with her a wunkirmian and displays a bowl filled with small coins or rice. With help from her numerous assistants (usually female relatives or friends), she distributes grains and coins to the children of the community while dancing and singing her special shrill song. The deep belly of the spoon from which this bounty is dispensed becomes the symbolic body or womb of the female figure. The event creates a profound visual analogy that honors the hostess, and women in general, as a source of food and life.

A very similar spoon is found on the Metropolitan Museum of Art, NY which originated from The Michael C. Rockefeller Memorial Collection, Bequest of Nelson A. Rockefeller 1979.

Condition: Despite age and diligent use, this ceremonial spoon is done with its beautiful dark brown antique glow in an exceptionally good condition. Apart from a minor hole in the edge of the spoon, there are no cracks or insect bites.