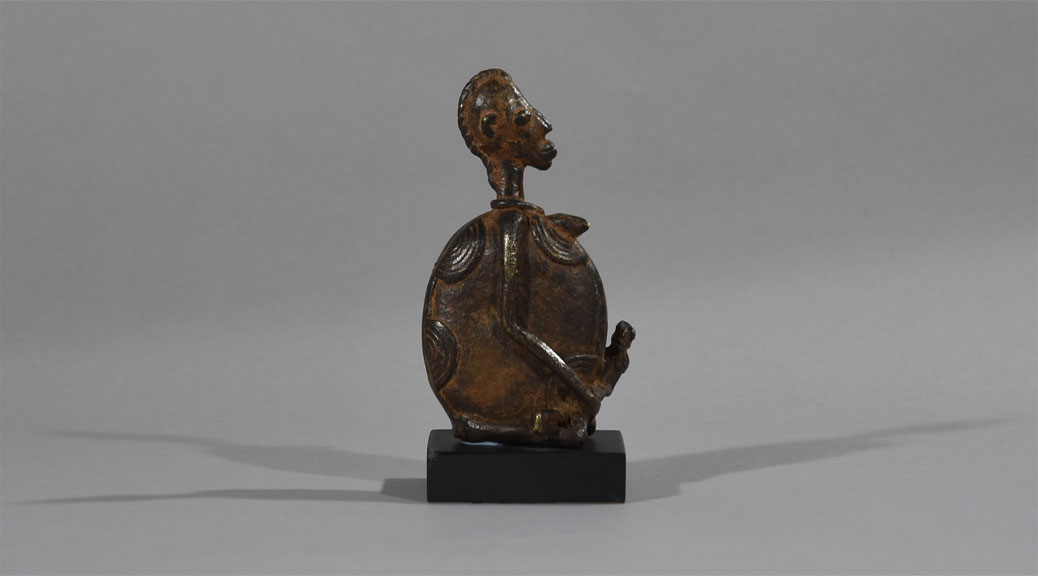 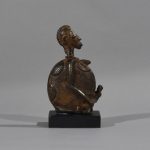 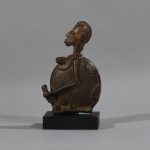 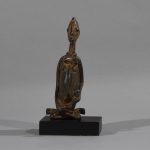 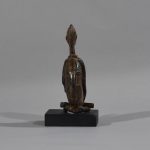 This Dogon bronze figure is a maternity figure. The kneeling woman is holding a baby in front of her, she has a circular but flat body with spiky breasts. Her face reveals a couple of protruding lips, and on her head she has a neatly braided hairstyle with a long braid hanging down the neck.

The figure may represent an ancestor or equally a Nommo, one of the eight Dogon primordial figures created by God. Dogon bronze figures like this were placed on a family altar or kept in the village priest’s shrine where they would have offerings that were meant to infuse them with life force and to assist humans on earth to intercede with the deities. Numerous terracotta, bronze, and brass objects have come to light from the great ‘Inland Delta Cultures’ of the Niger River and Benue River confluence. This figure could have been used as a shrine piece.

The process begins with hard beeswax. It must however be soft enough for carving fine details, but hard enough to retain its shape. After the wax object has been carved, increasingly coarse layers of clay are applied to the object and allowed to dry. The first and finest clay slips capture the wax details in the smooth mold, and the coarser clay layers provide strength. The entire assemblage is fired, causing the original wax carving to melt away, leaving only a baked clay shell. Liquid metal (bronze, brass, lid, silver or gold) is poured into the empty mold and left to cool and harden. Later, the clay exterior is broken open, revealing the finished metal object beneath. In direct lost-wax casting, the object produced is always unique, as the mold is necessarily destroyed as part of the casting process.  The method also called cire perdue in French.