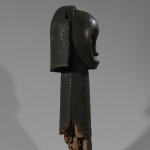 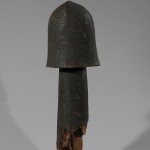 The byeri cult, for which all Fang reliquary heads and figures were made, was a family cult that honered ancestral spirits, sought their aid and blessings, and protected the ancestral remains. The word byeri means “ancestor” in a broad sense, a distinguished family member – either a man or a woman – whose skull was preserved in the nsek-byeri, or byeri box; the figure is called nlo-byeri, or byeri head. Very few people were authorized to see the contents of a byeri box, and these never included non-family members, children or women, and they could have been punished by death if caught trying to open one. The family chief himself initiated one of his mature sons, who assumed the responsibility of caring for the byeri objects and maintaining the proper rituals. In the presence of the village elders, the new “Keeper of the Skulls” was initiated by being shown for the first time the contents of the family byeri box and given a powerful hallucinogen. Under it’s influence he saw and heard the ghosts of his relatives beyond the grave.

The byeri box was kept in a special small room in the house. It was opened only rarely, and then only in private in the closed room. The sculptured figure or head served as a guardian, to frighten away intruders. In a general way, it represented the collective dead of the family without depicting any particular person. Larger byeri boxes were carried in processions, for no one was forbidden to see the box when it was closed, or to view the guardian figure.

Provenance: Acquired in 1999 – Despite the ‘old’ appearance this head show no evidence of use and was probably made to be sold.

Literature: A History of Art in Africa / Africa – The Art of a Continent