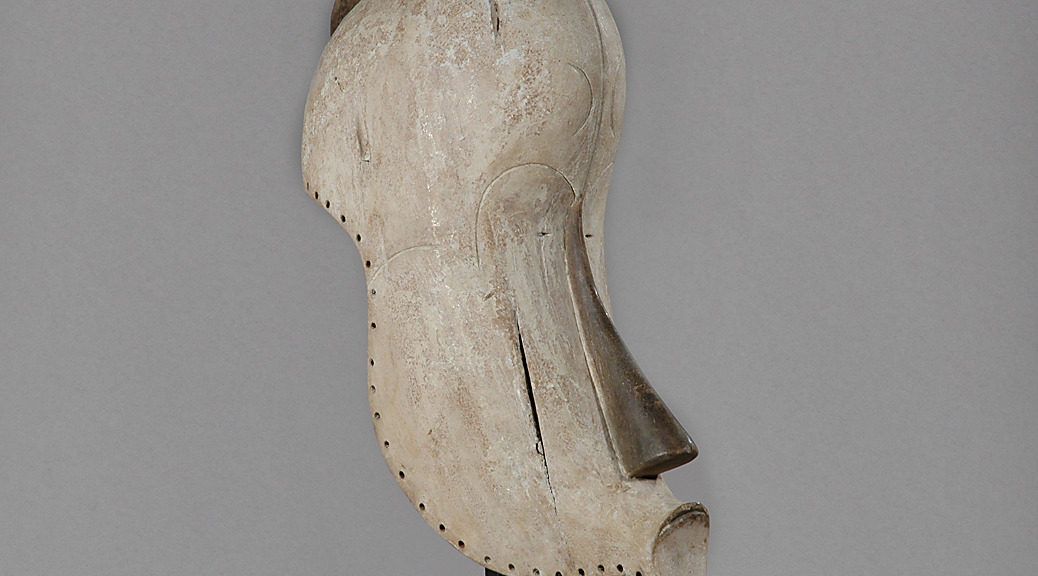 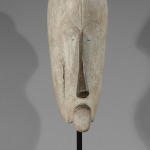 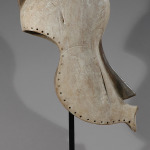 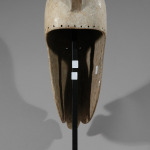 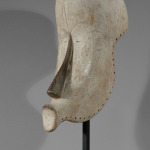 A vast majority of the Fang tribe, inhabit the equatorial rain forest in Gabon. A Fang mask is worn by spiritual leaders during rituals, to drive away evil spirits, or as symbols depicting wealth and prosperity.
The Fang people used masks in their secret societies. Members of this male society wore the Ngil masks during the initiation of new members and the persecution of wrongdoers Masqueraders, clad in raffia costumes along with helpers, would materialize in the village after dark each of the maskers would bear a torchlight. Ngil mask are normally elongated with the carved lines running from the forehead down to the tip of the nose.
This mask with high forehead and the long-shaped face are admirably harmonious, on the cheeks the scarifications are perfectly apposed as well as the line on the forehead and the arch of its eye-brows. The layers of kaolin indicate repeated use of the mask over a long period of time: an item of this quality has been kept and preserved carefully. The extreme porosity of the light wood and its oxydation confirm the fact that the object can be very old, it dates most certainly from the middle of the 20th century.

More subjectively speaking, this mask expresses like no other mask of its kind the spirit of Fang art implying the religious spirit and brutal and obscurepower, the very soul of the equatorial forest. Taking into account all Fang art, even considering primitive art as a whole, the ngil masks are, without any doubt among the rarest and the most coveted. Their rareness is to be seen in direct relation to the myth itself and their forms bordering universal concerns. Have they not been credited with every possible influence, whether officially established or occulted, in the arts of the 19th century. Picasso himself is said to have been under their spell, when he undertook the work for one of his major works, “Les Demoiselles d’Avignon“. Thus, on the occasion of the 1984 exhibition at the Museum of Modern Art of New York, William Rubin confronted the ngil mask of the Vérité Collection with the famous painting“Tête de Femme“ (1908) by Pablo Picasso. Today it is agreed that the Masters of Negro-African art simply catapulted themselves to the summits ofart before those of the Western world.