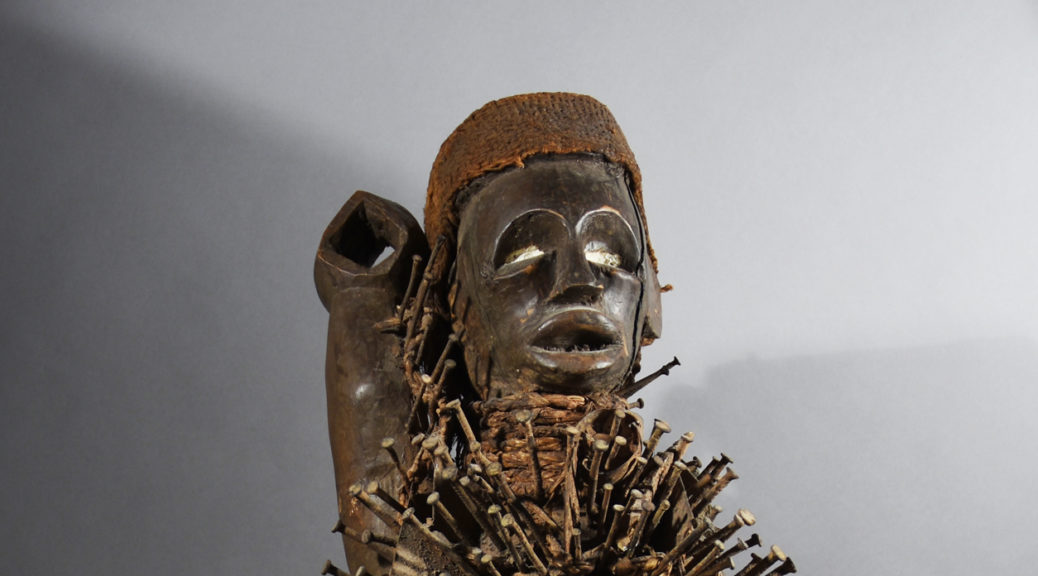 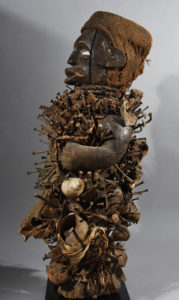 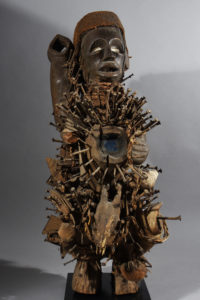 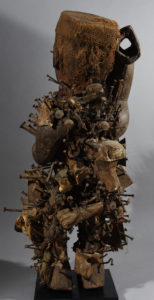 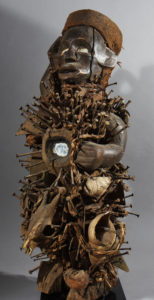 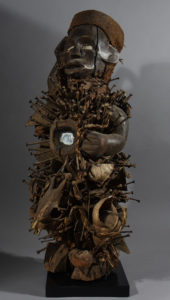 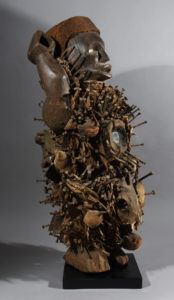 Kongo’s sacred sculpture called ‘nkisi’ (plurl. minkisi) is an unusual indigenous specimen among the most powerful and refined of all Sub-Saharan art forms. Mkisi rank among the iconic genres of African art and belongs to the most ambitious class of this tradition attributed to the studio by a master active along the coast of Congo and Angola in the late nineteenth century and identified with Mangaaka, the dominant jurisprudential force.

This figure represents a presiding authority and enforcing lord or king. Its crown element is the distinctive ‘mpu’ headdress worn by chiefs or priests. The figure’s attitude and gesture, leaning forward with his hands placed on his hips, is the aggressive attitude of one who challenges fearlessly. The abdominal cavity of the drug that initially attracted the defining power of the figure is sealed by a mirror. The mirrored glass was not only to seal the medicinal pack but also to reflect back the gaze of the viewer, completely concealing what lies behind. The mirror symbolizes the ‘nkisi’ spirit’s ability to see the human world and the inability of humans to view the underworld. The glitter of the mirror in the eyes of the sculpture was also believed to frighten witches and evil spirits away. The various nails and other metals together with animal skull, snails and bone stumps embedded in the figure’s expansive upper body are each placed in connection with a special event and then poured with chicken blood (which now appears as dust) and together attest to its central role as a witness and enforcer of critical conditions for its community. They document sealed promises, signed treaties and efforts to eradicate evil. The most imposing category of ‘nkisi’ are those which bear an accumulation of inserted nails and metal objects, remnants of their ritual use. In the west these have been called ‘fétiches à clous’ or nail power figures, and most recently were featured prominently in the ground-breaking exhibition Kongo: Power and Majesty held at the Metropolitan Museum of Art, New York (LaGamma 2015).

Among the best and most recognized descriptions of ‘minkisi – nkisi’, Bakongo figures are by the Dutch adventurer and plantation owner Robert Visser (1860-1937) who in 1902-1904 in the then Portuguese Congo saw these mysterious and grotesque figures. And managed to collect more than 1,000 objects which he donated in several installments to the Völkerkundemuseum Berlin, the Museum für Völkerkunde Leipzig, and the Linden-Museum Stuttgart. (His report follows at the bottom of this description).

Condition: The figure of wood, iron nails and glass (mirror), animal skull, snails and bone stumps and sprinkled with chicken blood, despite age, is in an exceptionally good condition..

Provenance: Danish private collector acquired in Paris in 1973 at an exhibition for OECD delegates at the Chateau de la Muette in the 16eme arrondissement restricted to OECD staff.

Prologue
“Kongo sacred sculptures called minkisi (sing. nkisi) are among the most powerful and refined of all Sub-Saharan art forms, and rank among the iconic genres of African art.  The most imposing category of minkisi are those which bear an accumulation of inserted nails and metal objects, remnants of their ritual use. In the west these have been called fétiches à clous or nail power figures, and most recently were featured prominently in the ground-breaking exhibition Kongo: Power and Majesty held at the Metropolitan Museum of Art, New York (LaGamma 2015).  The result of a collaborative procedure between a sculptor, a ritual specialist, and the people they served, these sculptures have a special resonance not only as sensitively-modeled representations of the human form, but also as physical testimony to the religious experience of Kongo communities.

Cultural context
As LaGamma (2015: 37) notes: “The most influential class of Kongo minkisi often took the form of formidable wood figures bristling with added hardware.[…] Along the coast, from northern Angola to southern Gabon, they were known as mbau, or ‘ready to fight’, while in the interior as far as Kinshasa they were called n’kondi (pl. minkondi), or ‘hunter’.  Unlike more specialized minkisi, minkondi were credited with assisting regional chiefs in maintaining public order.  Rare pre-eighteenth-century descriptions of the invocation of an n’kondi refer to the nganga [ritual specialist] striking two anvils together and inserting wood pegs into the sculpture.  In more recent times this call to action has taken the form of hammering in a nail, koma nloko.  Each inserted element, which might take the form of blades, nails, or screws, subsequently served as a memorandum of sorts relating to a specific case – the signing of particular vows, or the sealing of covenants.  Disputing individuals, whether divorcing spouses or warring factions of neighboring communities, finalized a binding agreement by coming together before an nganga and inserting hardware into an n’kondi.  A fee was paid for the addition of each element.”

She continues (loc. cit.): “An n’kondi‘s imposing stature, aggresive stance, and omniscient gaze as well as its associations with deadly afflictions and natural forces such as thunderstorms, fire, and birds of prey deterred antisocial behavior.  If its ability to prevent transgressions failed, an n’kondi was carried to a crime site and deployed in pursuit of the culprit.  These regulatory instruments were credited with controlling life-threatening bodily ailments, violence, and even death.  Accordingly, minkondi could punish violators with the full force of those same afflictions.”