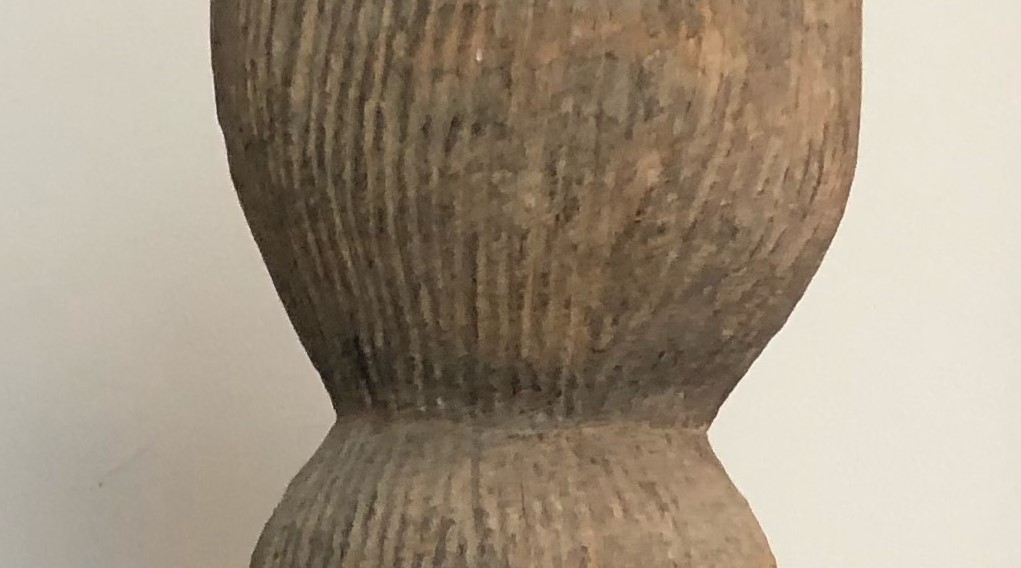 This is a very fine and old ritual object of the cult of the dead, from the Moba tribe of Togo.

The Moba, ancestral and protective figure, ‘tchitcheri’, can only be crafted by an individual whose father is a soothsayer.

Made of hard wood, these sculptures are always composed of a trunk, two arms, two legs, and an almost spherical head. For the Moba society, shaping a Tchitcheri is a delicate and very dangerous task.

This explains why only soothsayers are entitled to confer to their sons the necessary protection to craft these figurines. Those who refute this rule are supposed to risk blindness or insanity.

The sculpture are placed in graves, the ‘tchitcheri’ represent the ancestors and, therefore, they embody the world of the living and the one of the dead.

The Moba people, who live in northern Togo on the border of Burkina Faso, are known for their highly abstract, human figures. A round, spherical head sits – in most cases with no neck – on an extremely simple, long, genderless body with proportionally short arms and legs.

The Moba distinguish three varieties of the same type, each one according to size:
Small figures made of wood or iron. They are personal, individual protective figures and are placed on altars. They are called ‘Yendu tchitcheri’.
Medium-sized figures, made of wood, which is this present sculpture, that represent an important family ancestor. They are placed on the house altar of this family, are honoured and receive sacrificial offerings. They are called ‘Bavong tchitcheri’.
Large (almost life-size) figures made of wood that represent an important clan founder.

They are placed outdoors and should protect the entire village. They are called ‘Sakab tchitcheri’. The present, typical Moba figure is medium-sized and belongs to the second group, the ‘Bavong tchitcheri’. It represents an important family ancestor and stands on an altar to protect and help the whole family. It has visibly been honored and received sacrificial offerings for a protracted time. It is carved from hard wood and displays the ‘classical’ Moba style. It has some cracks due to age and a good dark-brown sacrificial patina, with some smoother areas due to years of ritual use.

While German museums (notably the Museum für Völkerkunde in Hamburg and Berlin) retain the first Moba statues that arrived in Europe at the dawn of the 20th century, it was in Paris in the early 1990s that gallery owner Pierre Robin worked on discovering and recognizing style. Liliane and Michel Durand-Dessert were the most ardent collectors, searching in each of the chosen pieces for the most accomplished singularity of movement and expression.

A masterpiece of the corpus, this archaic sakab tchitcherik statue imposes the masterful presence of the founding ancestor, emerging from the earth in a slow movement dictated by the power of evocation. The dynamic – remarkable – plays on the tension between the hierarchical form of the original trunk and the subtle asymmetries of the sculpture, leading the gaze towards the imposing head whose moving line of the cap and the ribs of the hard wood, deeply eroded, increase the pregnancy. From this striking metamorphosis combining the history of the clan with the natural world, the work has preserved fragments of the primitive bark, perceived as the ravine skin of the ancestor.

The most imposing Moba altar statues are also the most rare. Named “tchitcheri sakab sing tchitcherik sakwa” (sakab means “old men”), [they] are planted in the ground, at least to […] and are named after ancient clan ancestors [. Local clan histories claim that each of the broad wood carvings was planted by the founding clan ancestor, or by his son, which suggests that these figures could be more than two hundred years old [.]. Diviners. ..] assert that they would not order the carving of chitcheri, since the founding ancestors are already represented. ” (Kreamer “Moba shrine figures” in African Arts, February 1987, Volume XX, No. 2, pp. 52-55).

Although German museums (including the Museum für Völkerkunde in Hamburg and the one in Berlin) held the first Moba statues that arrived in Europe at the turn of the twentieth century, it was in Paris in the early 1990s, that gallery owner Pierre Robin worked to shed light and further recognition of this style. Liliane and Michel Durand-Dessert were most ardent collectors, looking for the most accomplished singularity of movement and expression in each selected piece.

A masterpiece within the corpus, this archaic tchitcherik sakwa figure imposes the masterful presence of the founding ancestor, emerging from the ground as if in slow motion, driven by the power of evocation. The – remarkable – dynamics rely on the tension between the originality of the original and the subtle asymmetries of the carving, which lead the eye to the head, where the moving line of the hairstyle and the deeply eroded hardwood veins bolster its substantiality. From this breath-taking metamorphosis, seamlessly blending the history of the clan into the natural world, the figure retains fragments of its primitive bark that can be seen as the furrowed skin of the ancestor.