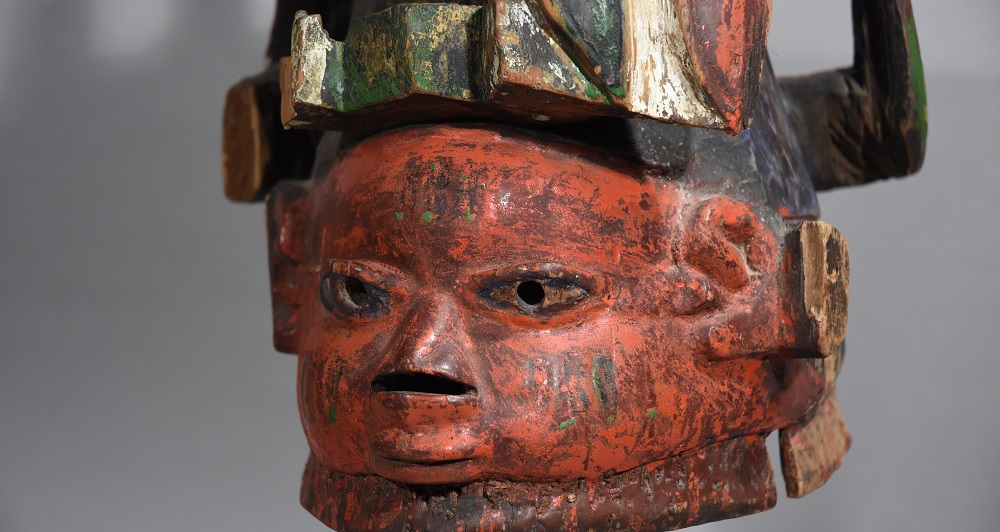 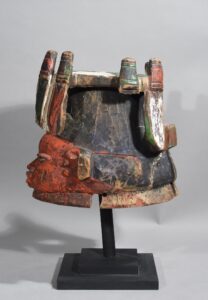 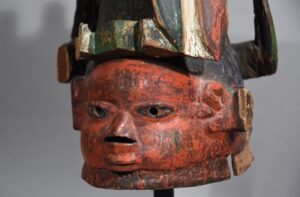 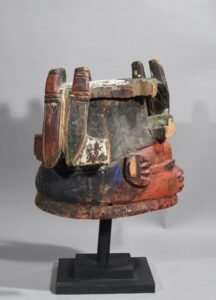 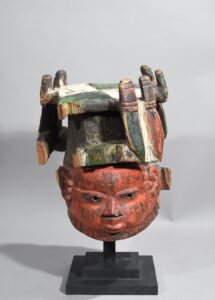 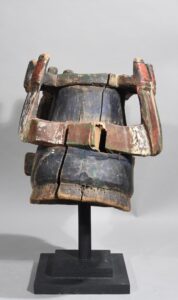 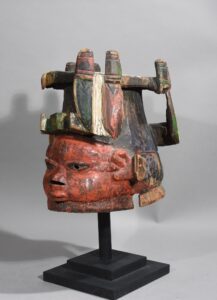 This dramatic, colorful, sculpturally painted, and genuine Gelede headgear originates from the Yoruba people, and is carved from a single piece of wood. It is cut with classic Yoruba facial features: heavy eyelids, bulgy almond-shaped eyes, the classic wide nose and compressed full lips. The pupils and nostrils are roughly pierced with circular holes. The traditional masculine face is painted on the forehead and both cheeks. On top of the head is placed a hut-like figure surrounded by carved and painted ‘knives’. This tableau has been used in connection with the annual festival which is held every year between March and May, representing the start of a new agricultural season. The ritual takes place at the market because the market in the Yoruba tribe was considered a place where mortals and spirits gather, most importantly where women sell or trade their food. The marketplace represents a woman’s power and presence: the market was more like their second home, even more important to them than their husbands’ domestics.

‘Gelede’ as translated into English simply means: “Headgear”. Gelede masks are used in connection with festival performances to soothe witches, also known as “Mothers”, and simultaneously honor the creative and dangerous powers of older women, female ancestors and goddesses, who are all affectionately called “Our mothers” in the author’s words (Drewal, Henry, John Pemberton III and Rowland Abiodun) the power of “mothers” that strengthens social existence, but it may also be known for its destructive form of sorcery that destroys life by creating impotence, barrenness and disease and famine for the country, but it does not usually use this force against the Yoruba people, but instead encourages rain and fertile soil.

The Ketu-Yoruba people are credited with the invention of Gelede rituals sometime in the latter part of the eighteenth century according to oral traditions throughout the region. A popular Yoruba saying: oju to ba ri Gelede ti de opin iran (“The eyes that have seen Gelede have seen the ultimate spectacle!”). Gelede’s affective power and effect comes from its multimedia format, where art combines song, dance, costume and music to create moving artistic experiences.

This mask was made for the celebration and not made for sale!

Condition: This beautiful mask with its bright clear colors is clearly marked by a dramatically performed dance. During the violent incidents, the dancer may have fallen, and pieces of the headgear have broken off.

Provenance: Danish private collection. According to the heirs, this mask was collected before 1950.

Lawal, B., The Gelede Spectacle: Art, Gender, and Social Harmony in an African Culture, University of Washington Press, 1996.

Roberts, A. F., Animals In African Art: From the Familiar to the Marvelous, Prestel, 1995.