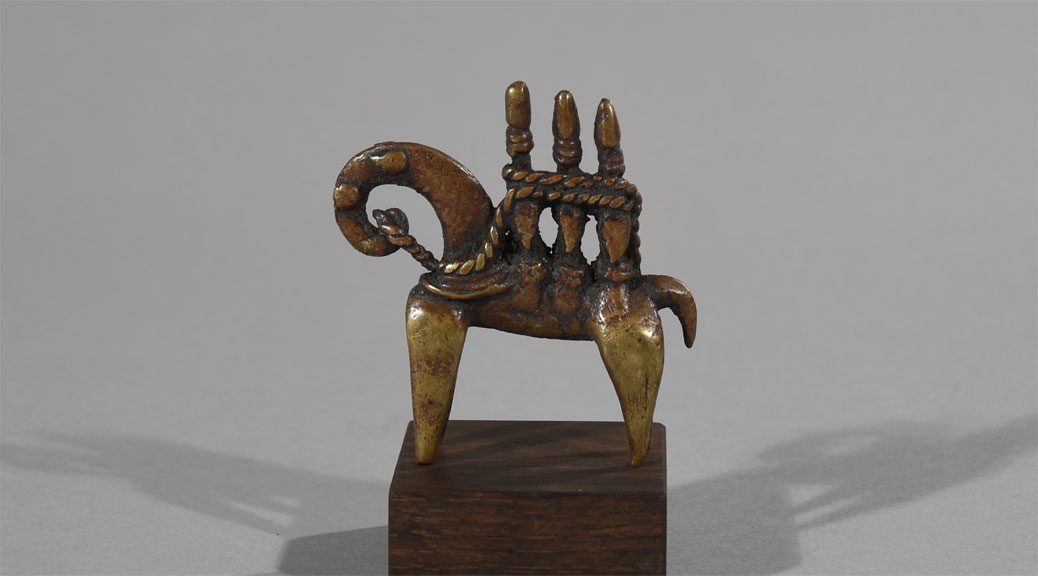 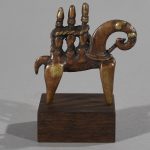 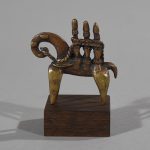 This fine, small abstracted bronze figure formed as a ‘horse’ with two riders found near the Lake Chad basin, along the Logone and Chan rivers has been used by the people of Kotoko as a talisman to protect against illness. Particularity against mental illness.

The form of the animal is clearly abstract, due to an uncertainty about the nature of the animal. The explanation is that in the area where the Kotoko / São people lived, huge constellations existed in the form of fossils of dinosaurs that the people considered had superhuman forces and which they attempted to imitate in these equistrian figures.The first figures found originate from the 2nd century and are imitated in forms of imaginative horses, camels or elephants.

The Kotoko have their settling area in the northernmost edge of Cameroon and adjacent parts of Nigeria and Tchad and counts around 100.000 people. They are the followers of the Sao Empire who lived near the Lake Chad basin. This area is where the ancient kingdom of Sao was located, from the 6th century BCE to the 16th century CE. which ended in the 16th century, and who first mixed with the conquering Massa and finally were absorbed in the Kotoko people.

In his important monograph “Earth and Ore”, Karl-Ferdinand Schaedler (1997: 274) notes: “The culture of the Sao on Lake Chad is regarded as one of the oldest in West Africa, and although extensive archaeological and ethnohistorical material is available that goes back to the early Arabic writers, it is still not possible – as is also shown by more recent research (Forkl, 1983) – to form a precise picture of this people so significant for its art and towns. According to legends, which are still related, the Sao were a people of powerful giants who thought they could even trace their origin back to Jerusalem: ‘A woman from Jerusalem bore twins, who married each other and produced a race of giants, the Sao…’ In about the 7th century, the Sao occupied the oases Bilma, Tadjéré and Fatchi north of Lake Chad and then settled west of the lake around the 10th century, where they founded the actual Sao Empire.

In the second half of the 14th century internal discord fomented from outside split the empire, which then, at the beginning of the 16th century, constantly had to fight off attacks. Subsequently the Massa from the east and, finally, the Bornu troops destroyed what still remained of the towns.

The Sao themselves broke up or mixed mainly with the Massa, who today are included among the Kotoko, and new ethnic groups grew up, especially in Northern Cameroon.