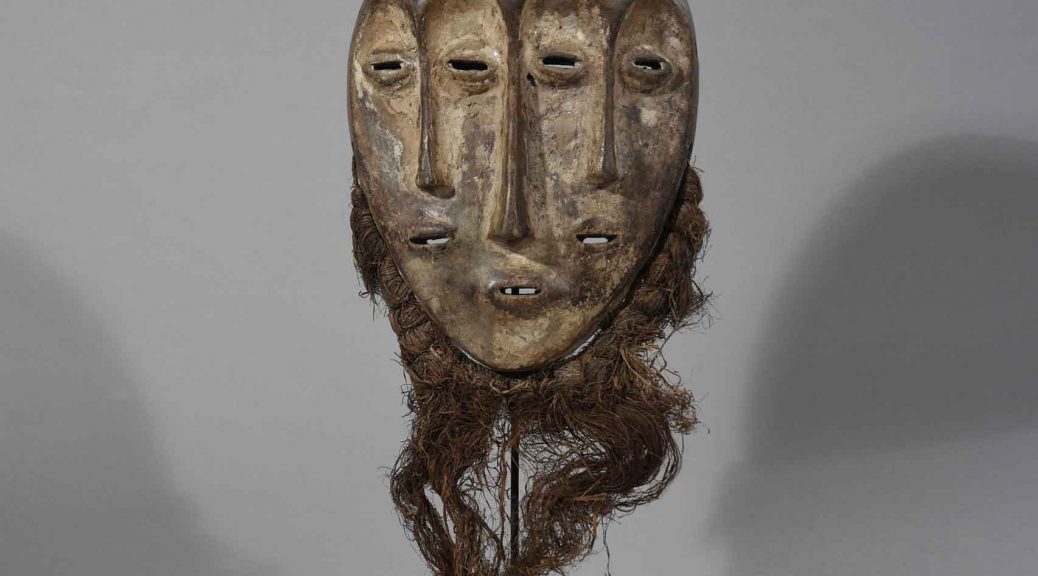 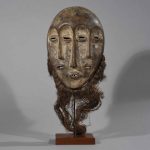 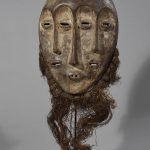 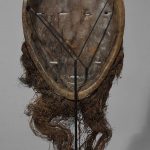 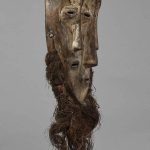 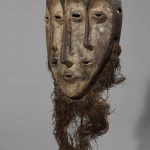 Lega masks are usually carved in light-coloured, lightweight wood, with typical heart-shaped Lega concave faces, coffee bean eyes, long narrow noses and small mouths in a distinctive style with a slightly protruding forehead and, as this one, adorned with a fibre beard attached to the chin.

There are small miniature masks, called ‘Lukwakongo’, that serve as ‘badges’, as it were, of the Bwami society. Larger face masks, such as this ‘Tricephalous mask’ (three-face mask) were however, used in instruction and initiation ceremonies into the five progressive levels of Bwami, the association that Lega men rise through with lifelong learning and deeds.

Among the Lega (also called Rega, Barega or Warega), in eastern Congo, the Bwami society presides over the tribe’s social and ritual life (six ranks for men, three ranks for women).

The faces of Lega masks are rubbed with white clay (pembe) each time that they are used and thereby acquire the white pagination that colour the face and enhance the various decorative designs as in this mask of dots around the face with lines under the eyes. Lega masks generally known as Lukwakongo, are relatively standardized in form however masks of particular importance with ritual and symbolic distinction will have unique forms. The social and political life of the Lega (also known as the Warega) is regulated by the Bwami society to which both men and women belong. This mask was used for initiation to one of the first two levels of the Bwami society. The white sections were repainted with Pembe each time they were danced. The mask was worn by the initiated and displayed on a fence as well.

The Lega people live nearby the northern end of Lake Tanganyika on the banks of the Lualaba River in the Democratic Republic of the Congo and are also known as the Warega. Living in small village groups they have no centralized authority but govern themselves through a communal association known as Bwami. This association is composed of male and female members who strive to achieve advancement in the various ranks of Bwami in which advancement is dependent upon the initiates passing through a number of ranks to achieve status and prestige and recognition as moral individuals. For the Lega the ultimate goal is to reach the uppermost level of Bwami where one would be recognized as a Kindi, one who exercises moral suasion and is a leader in society. The complex system of instruction, initiation and advancement in Bwami uses masks and figures to document the various levels of Bwami and to serve as badges validating the initiate’s knowledge of the secrets of Bwami and of their rank. Initiates earn the privilege to wear and display masks that might be worn on their arms or faces or simply exposed on racks or on the ground to other Bwami society members indicating their rank.

Condition: Despite age and diligent use, this wood mask with beard is in an exceptionally good condition. No cracks, swaths or insect bites.