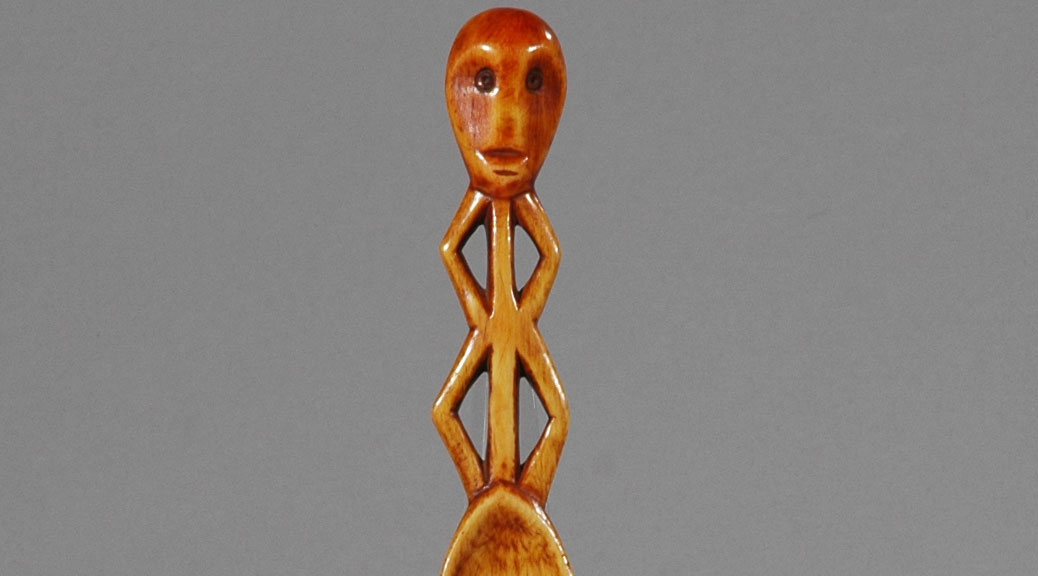 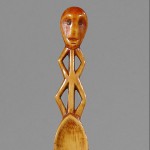 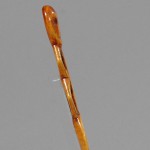 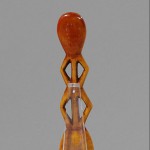 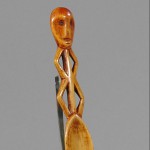 This spoon has anthropomorphic form with an openwork abstract body and lanceolate head. It is exceptionally fine softly worn and has a lustrous golden patina.

Ivory spoons seem to emphasize continuity, perhaps through reference to feeding and growth. Older men who are high-level members of “bwami” eat with an ivory spoon, reminding those watching of their status and value to the community. Spoons are also used in circumcision rites. Men place an ivory spoon in the mouth of a young boy for him to bite on during his circumcision.

They are linked to various sayings that use the shape of the spoon for sexual imagery (“Kalukili – yo used to give me the idago [vulva], now you give me the back”), while the Bwami also hold ceremonies where members “feed” a masked performer with a spoon, giving rise to the metaphorical term: “Old Turtle is eating pounded bananas”.

This striking ivory spoon was made by the Lega people of the DR Congo, and is much more than a simple utilitarian object. The handle is a female (?) figure with traditional Lega characteristics, including a large head, a heart-shaped face, an incised mouth, round eyes and a characteristic forehead.

The Lega people are amongst Africa’s best-known carvers and artists. Currently settled in the Kivu province of the eastern DRC, they believe themselves to be descended from an eponymous ancestor who migrated into the area from what is now Uganda. They are also known as Warega and Balega, based on corruptions of their actual name by neighbouring groups and Arab traders, respectively. They live in small villages and consider themselves parts of distinct lineages, although to outsiders the “Lega” group is a well-defined unit. They are further defined on the basis of their modes of subsistence. The western Lega settled in the forest (malinga), where they rely on hunting and gathering, while the eastern groups live on poor soils, further denuded by their mode of slash-and-burn agriculture.

Lega government is based along the lines of a gerontocracy and balanced very finely between leading members of different lineages. The Lega believe in a trio of gods named Kinkunga, Kalaga and Kakinga, and that when humans die they will enter a subterranean afterworld known as Uchimu. Social life is structured by three main social institutions: family and kinship (ibuta), circumcision rituals (ibuta) and the Bwami society. Of these, the latter is perhaps the most powerful. It is centred upon the guidance of young people to moral maturity, although it also fulfils a range of other socio-political, economic and artistic functions. Much of the paraphernalia produced by the Lega pertains to the workings of the Bwami society. Examples include initiation objects – that are sometimes ground away and the resulting dust used as a healing device – isengo (lit. “heavy things” used in healing), binumbi (publicly visible insignia), bingonzengonze (“things of play”) and the large category of sculpted objects/assemblages known as bitungwa. Spoons such as this are known as kalukili or kakili, a play on words as the term also means “heir”, and is linked to the notion of continuity.

Provenance: This spoon comes from the important collection of Hendrick Westerdijk and his son Peter, that they initiated in the 1960s in Amsterdam.