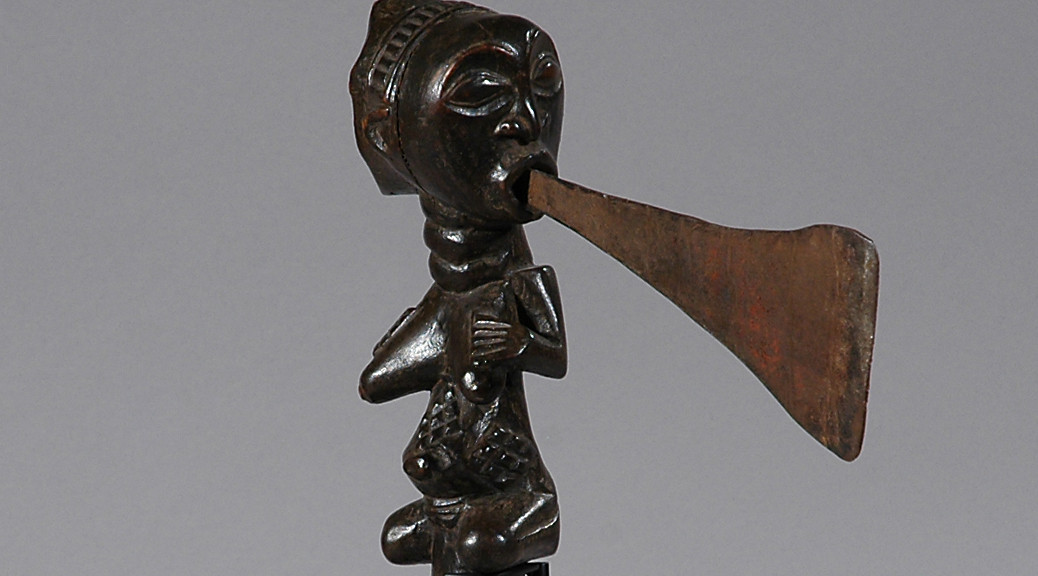 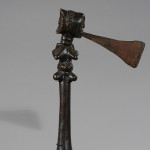 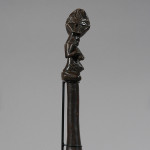 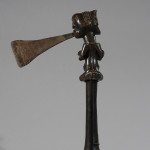 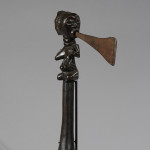 This beautiful Luba Adze with a wood handle terminating in a well-proportioned female figurine with typical Luba hairstyle and tattoos. From the woman’s mouth arising out of her tongue in the form of a hatchet blade.

This type of ceremonial adze is widely distributed in the basins of the Congo River and its tributaries. It serves as a mark of rank and authority, and is carried hooked over the shoulder when the owner moves about. Some such adzes were the property of master carvers who were also persons of rank. The blade is simple wrought iron, which highlights this admirable woman’s attributes and beauty.

This adze made by an unknown Luba artist is a fine example of artistic mastery of wood and iron. Even the discoloration that has occurred through use lends to the overall beauty of the piece. The adze is most likely not a utilitarian tool but a piece of regalia and a symbol of status. Most striking is the tongue-like triangular blade that extends from mouth of the female head. This is quite captivating as the artist has created a piece that at once displays complete serenity and a violent interaction. Serenity and violence are not the only concepts at play here; the iron adze also is symbolic of life and death. It cannot be ignored that this is indeed a weapon capable of inflicting harm. At the same time it is a tool associated with societal progress as metal has contributed to the improvement of living standards especially in terms of agriculture.

The Luba live in the savannah region of the Democratic Republic of Congo, Africa. Their kingdoms were at their zenith between the 17th and 19th century. Excavations have revealed that advanced metallurgy skills have been practiced for over 1500 years. Luba blacksmiths are regarded as holders of secret knowledge, possessing skills that according to their lore have been handed down from a mythological hero. This hero is also credited for forming kingship amongst the Luba, forever binding the relationship between kingship and iron. To make or to hold an adze then is to commemorate Luba origin and to wield an object that embodies royalty and power.

The female head with elaborate hair style and marks of scarification her stomach is stunning. The artist has paid great attention to the proportions and balance of the face and body. The female form is common in Luba art as women hold high status serving as life-giving mothers, priestesses and other high ranking officials. In addition only a woman’s body was believed to be strong enough to embody the spirit of a deceased king. In accepting this honor the woman would also inherit the king’s regalia. Again, the concepts of transformation and life and death are reiterated in this adze in the combination of female and metal.