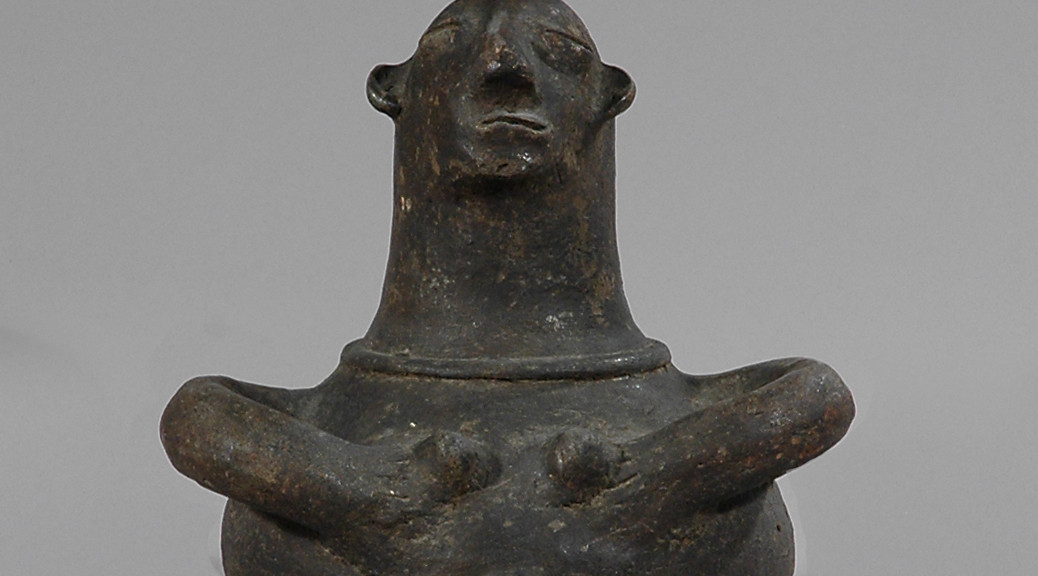 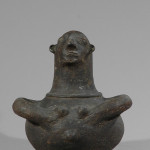 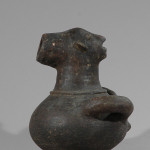 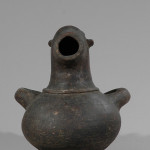 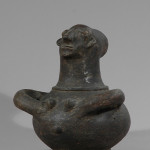 This fine, round, dark gray vessel depicts a caricature of a Mangbetu woman.
The Mangbetu or Monbuttu lives in the Orientale Province in the north-eastern corner of what was once the Belgium Congo, formerly Zaire – currently the Democratic Republic of the Congo – DRC. Linguistically they connect to the Central Sudanic language groups. Mangbetu clans presided over Bantu and Ubangian speaking tribes that were interspersed among them. Elites, mainly from the Mabiti clan, assumed control over most Mangbetu clans and their neighbours.
The people of this tribe produced a large variety of highly developed art and music, such as harps, guitars, pots, and other crafts. Their pots are still prominent in today’s art spectrum, and the ones that have been constructed in the early days of the tribe are sold to collectors and people alike for high prices.

The Mangbetu people constructed three types of pots: the Large Pot (also known as nembwo), the Small Pot, and sculpted/decorated pots. The nembwo is used to serve general purposes, such as getting water from the lake and carrying vegetables. The smaller pots were used for more specific tasks such as cooking, cleaning, and pouring. The decorative pots were made more as a hobby and are nowadays used as collector’s items and can get a high price in art auctions.

The nembwo and Small Pot have a very rotund shape, not straying far from the conventional pot shape. More spherical than most due to how it is constructed, most are thin and smooth with a thicker opening. The more decorated and sculpted pots of the Mangbetu tribe have human or animal figures (mostly their heads) at the opening of the jar. The handles of these pots are sometimes molded and shaped into animal or human parts. The bottom of the pot is round, and occasionally patterns will be carved onto the surface.

Mangbetu pots are mostly mono-chromatic, made entirely with clay and fired in its natural form. As a result, most decorative pots are a dark gray color while the nembwo and Small Pots lean more towards russet. To serve as a decorative quality, patterns are often carved onto the surface of the pots in addition to the animal/human figures. Many times these patterns are very thin, long lines that cover most of the pot. More often than not, they are circular or wavy.

Mangbetu women and men make their pots and jars using relatively coarse-textured clay entirely by hand, either by building the clay up in rings or using a variation of the hammer-and-anvil technique. They mold the heads and figures on the openings and handles, while the patterns on the surface are carved using small tools, such as shell scrapers and wooden roulettes. After the pottery is formed, they are fired in open bonfires.

Age: Typical of ‘trophy pots’ collected in the first quarter of the 20th century.

Click here for more information about the Mangbetu people