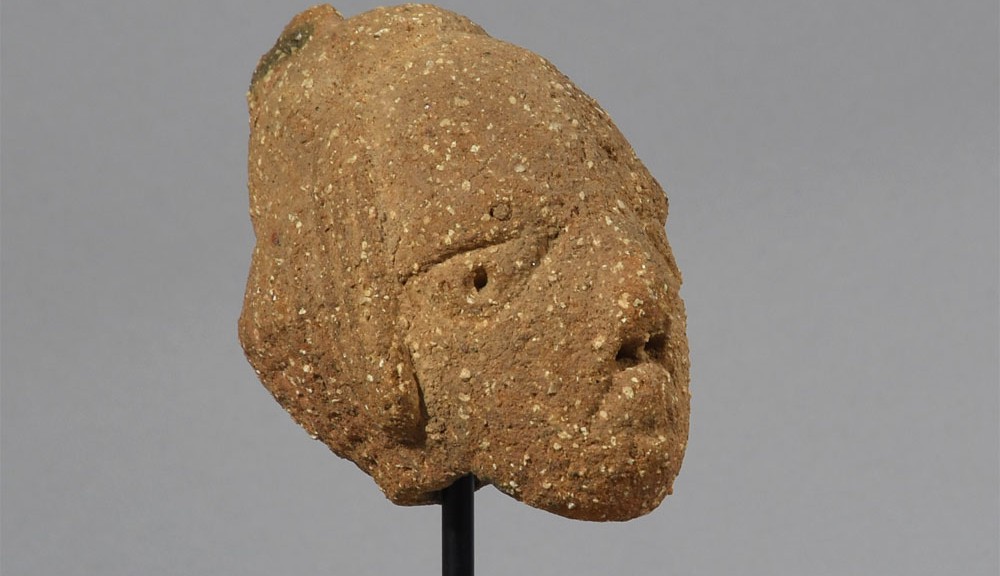 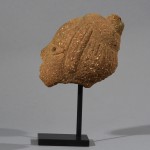 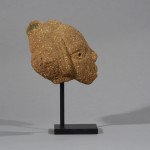 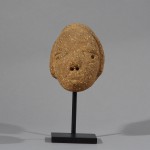 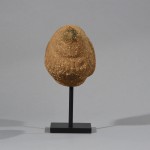 This little ‘Nok’ terracotta head was found in a village about 160 kilometres northeast of Baro in Nigeria in1947 and est. to be from around 500 BC. till about 200 AD.

Notice the decorative and classic little head with slanted, walleyed drilled eyes under arched eyebrows (which are often seen in later groups such as the Yoruba), a wide lipped mouth, the snub nose is broad and flat –unlike the majority of pieces that have a more aquiline or elongated nose – and the ears are covered by hairstyle form sideburns. The head is mounted on a custom-made stand.

The earliest identified Nigerian culture is the Nok culture, which thrived between 1500 BC and 200 AD on the Jos Plateau in northeastern Nigeria. Information is lacking from the first millennium BC following the Nok ascendancy. However, by the second millennium BC, active trade routes developed from Ancient Egypt via Nubia through the Sahara to the forest. Savanna’s peoples acted as intermediaries in exchanges of various goods. Reasons for the Nok’s sudden disappearance remaines unknown.

In 1943, tin mining in the vicinity of the village of Nok near the Jos Plateau region of Nigeria brought to light a terracotta head, evidence of the oldest known figurative sculpture south of the Sahara. Although stylistically related heads, figures, animals, and pottery shards have been found in a number of Nigerian sites since that time, such works are identified by the name of the small village where the first terracotta head was discovered. Artifacts continue to be unearthed without documentation of the context in which they were buried, a lack of extensive archaeological study that has severely limited our understanding of Nok terracottas. One of the earliest African centers of ironworking and terracotta figure production, the Nok culture remains an enigma.

Most Nok sculpture are hollow and coil-built like pottery. Finely worked to a resilient consistency from local clays and gravel, the millennia-long endurance of these ancient objects is evidence of the technical ability of their makers. This is not to say that Nok sculpture has survived unchanged by time. The slip (the mixture of clay and water used to give pottery surfaces an even texture) of many Nok terracotta has eroded, leaving a grainy, pocked exterior that does not reflect their original smooth appearance. Most of the Nok sculpture found consists of what appear to be portrait heads and bodies fragmented by damage and age. The recovered portions of the baked clay bodies that have survived show that they were sculpted in standing, sitting, and genuflecting postures.

Nok head fragments were once part of entire bodies and are the most renowned objects within the corpus known to date. These objects are so highly varied that it is likely they were modeled individually rather than cast from molds. Although terracottas are usually formed using additive techniques, many Nok pieces were sculpted subtractively in a manner similar to carving. This distinctive approach suggests that a comparable wood-carving tradition may have influenced them. The heads of Nok terracottas are invariably proportionally large relative to the bodies, and while not enough is known of Nok culture to explain this apparent imbalance, it is interesting to note that a similar emphasis of the head in later African art traditions often signifies respect for intelligence.

Although every Nok head is unique, certain stylistic traits are found throughout the corpus of known work. Triangular eyes and perforated pupils, noses, mouths, and ears combine to depict men and women with bold, abstract features. Perhaps the most striking aspects of Nok sculptures are the elaborately detailed hairstyles and jewelry that adorn many of the figures. The variety, inventiveness, and beauty of their design is a beguiling record of cultivated devotion to body ornamentation. But as captivating as these embellishments are, the range of expression in Nok terracottas is far from limited to depictions of idealized health and beauty. Some pottery figures appear to depict subjects suffering from ailments such as elephantiasis and facial paralysis. These “diseased” visages may have been intended to protect against illness but, beyond conjecture, their meaning and the significance of Nok sculpture in general remains unknown.

The great sophistication of Nok terracottas has led some scholars to believe that an older, as yet undiscovered tradition must have preceded Nok terracotta arts. It has also been suggested that Nok terracottas have some sort of relationship to later portrait arts, such as those of Ife, but this is currently unproven. Masterful relics severed from their predecessors and successors by the passage of time, Nok terracottas currently occupy an important but isolated space in the history of African art. Citation – Department of the Arts of Africa, Oceania, and the Americas. “Nok Terracottas (500 B.C.–200 A.D.).” In Heilbrunn Timeline of Art History. New York: The Metropolitan Museum of Art, 2000–. http://www.metmuseum.org/toah/hd/nok/hd_nok.htm (October 2000)