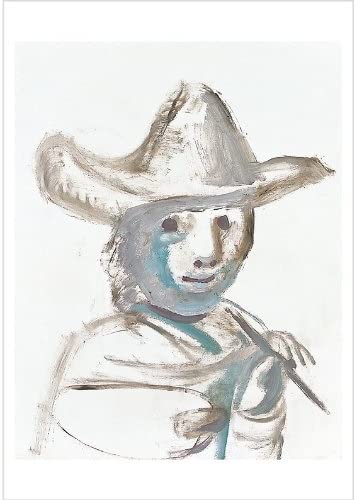 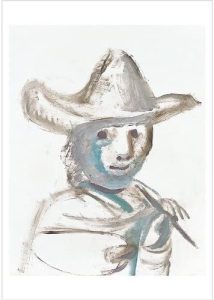 History of the original piece:

Perhaps this is a relentless confrontation with the mirror, as Picasso on June 30, 1972, at the age of 91, once again saw himself in the face. In that mirror image, he saw death with wide eyes.

For this drawing he had used chalk in the same blue, purple, and black that he had used thirty years earlier in a still life with a cow-skull when he had been shocked by the news of the death of his friend and countryman Julio Gonzalez. Now Picasso was preparing his own skull for such an event, and he stared with motionless intensity at the image that stops at the border that separates life from death. Nothing else is expressed in the features, which in their stiffness reveal the extreme receptivity of the eyes. And there is no doubt that these eyes are Picasso’s.

In other respects, too, the portrait stands at a crossroads. A few weeks earlier, Picasso had completed the series of 201 paintings that were to become his last “auvre”. The isolation of the figures, which appear here and there in twos and threes, was his constant identifying characteristic. In broad and ruthless strokes, Picasso had sketched these creatures, and in each case, he adapted them in an appropriate format. The robust driving force of the painting style corresponds to the appearance of the archetypal figures depicted therein. The painter’s head is also drawn in this spirit, which reaches into the sphere of the graphic art that occupied Picasso in the ensuing months.