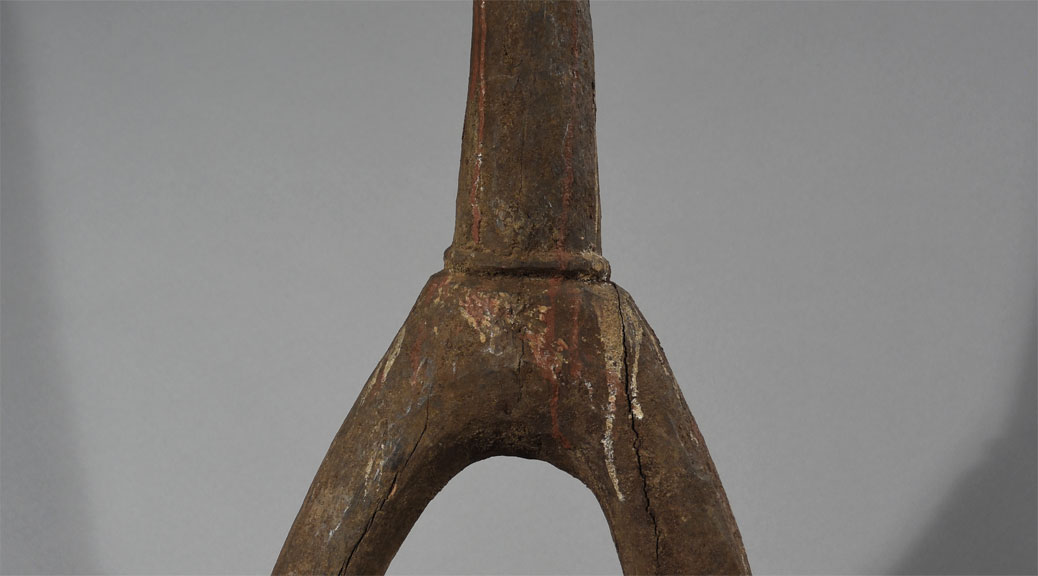 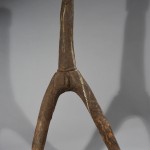 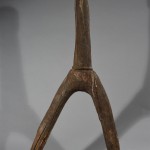 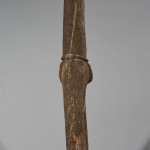 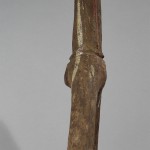 A minimalistic and highly abstract figure with cylindrical head over widening torso and legs with no discernible features other than male genitalia is a phallic idol from the Dagari / Lobi tribe of Burkina Faso.

The Dagari are a subgroup of the Lobi people, living east of Gaoua at the borders of Ghana and Burkina Faso. The term Lobi has come to mean people from a region defined by colonial administrators, using European ethnographers’ surveys as Lobi.  In French West Africa this region was the “Cercle de Lobi”.  It contained a variety of more and less closely associated ethnic groups including villages identified as “Lobi”, “Dagari” and “Gan” as well as other groups.

These Dagari figures are the most abstract and symbolic of Lobi Figures. They are the enigmatic, brooding sculpture that protects the Dagari subgroup of the Lobi people of Burkina Faso. Even though these are the most abstract of all Lobi related figures, the figures possess a wonderful charm and character.

Ranging in size from 22-36″ (58-94 cm) high, most are frontal, symmetrical and timeless sentinels expressing the traditional beliefs of the Lobi. The figures were placed on family altars in the thilda, a small sacristy or room in each dwelling. Each figure was not a representation but an actual spirit (tibil thil). It protected the family and home from illness and other misfortunes. The spirit could also be used for divination; it could demand offerings and additions of other figures. The accumulation of statues on a family altar gave social status and were passed on from father to son. There are theories saying that the Dagari figures of this type is created by the eldest grandson upon the death of his grandfather.

However, whether this is solely the paternal or maternal grandfather we do not know, but according to ‘specialists’ who are very insistent that it is the “grandfather, not the father”. The grandson was required to go to the forest and fashion an image of the deceased from a tree. As all Dagari figures in our experience were of extremely hard wood we can assume that the type of tree was probably narrowly defined. The figures is clearly male, occasionally they can have noses and mouths but rarely have defined eyes or other facial features. Once carved they were placed among other objects of veneration on the family altar, leaning back against a wall. Sacrificial libations including the blood and other byproducts of a slaughtered chicken were splashed on the altar. It is for these reasons that the front of the Dagari figures are encrusted and mostly not the backs. In fact if you look closely at this examples you can see drip marks evidencing the angle at which they were positioned. In addition, because the feet and back of the head were typically the three points in contact with the floor and wall, these areas typically will show the most insect and/or bacteriological damage. There are very few, if any, Dagari figures of this type left in the field

Condition: A fine early example, on a custom base. Very good condition with definite signs of age and use, heavily eroded with libation, encrusted and feathered on the top with only minor stress fractures. Very strong and solid.