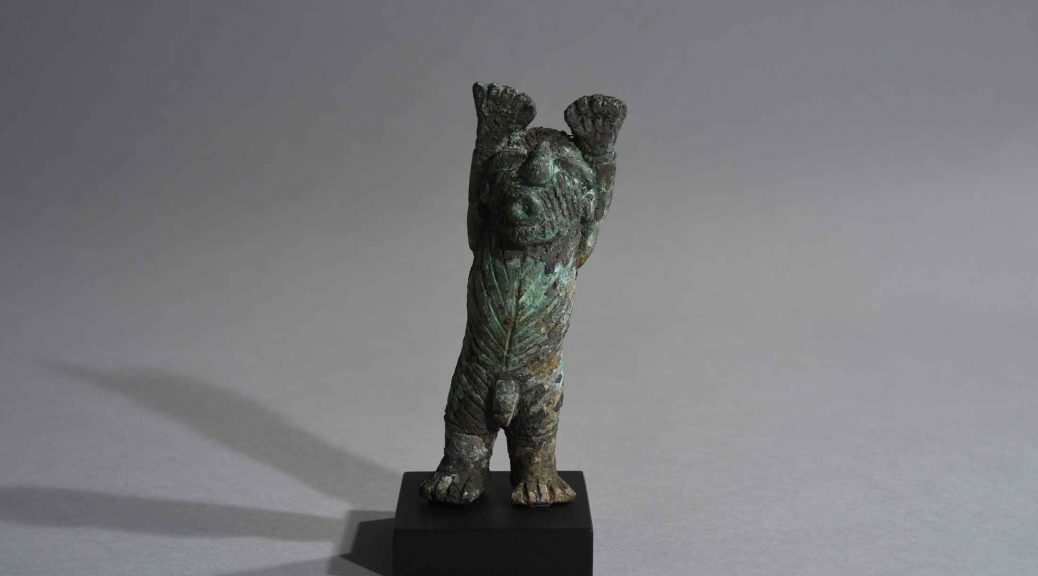 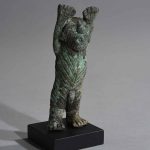 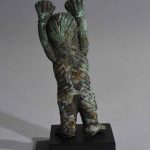 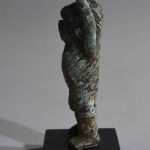 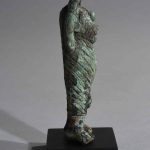 This little, charming, bronze, male figure is from the almost forgotten Sâo culture.     It was found by archaeologists in a funerary urn together with the deceased’s personal property. During the 20th century, archaeologists found several thousand urns in an area near the Chari River, or Shari River, south of capital N’Djamena in Chad.

One of these archaeologists was Marcel Griaule, the leader of the French Dakar-Djibouti Expedition (1931-1933). As an ethnographer, Griaule was fascinated by the folk traditions of the peoples inhabiting the Chadic plain and collected their oral lore. These were then translated and published as Les Sâo Legendaires. It was due to this book that the concept of Sâo Civilization or Sâo Culture was coined and popularized. This idea of ‘culture’ was manifested in the works of art produced by its people. Therefore, Griaule’s expedition was concerned mainly with finding pieces of art produced by the Sâo. Griaule was not disappointed, as the Sâo produced intriguing statuary in clay, large, well-fired ceramic vessels that were used as urn and contained the deceased’s possessions, including bronze figures, weapons and various religious effects.

The term Sâo was likely to have first been introduced into the written sources during the 16th century AD. In two chronicles (both of which were written in Arabic) by Ahmad Ibn Furtu. In the book The Book of the Bornu Wars and The Book of the Kanem Wars the grand Imam of the Bornu Empire, Ahmad Ibn Furtu, described the military expeditions of his king Idris Alooma. Those populations that were conquered and vanquished by Idris Alooma were generally referred to as the ‘Sâo’, the ‘others’ who did not speak the Kanuri language (a Nilo-Saharan language). These settlers, who were possibly the first settlers of the region, spoke one or another Chadic language, derived from the evolution of the Central Chadic language sub-family.

Condition:  This little, chubby male figure radiates with his raised arms. Despite (or because of)the figure being in the grave along with the deceased for more than 500 years it is in an exceptionally good condition. The stay in the urn has created a thick green irrigated surface that makes the figure even more attractive and exciting.

Age: Before the 15th Century.

Provenience: Found by the chief and owner of the land where the grave was found and sold to a private Belgian collector.

Archaeological evidence shows that the Sâo buried their dead. The tradition of placing a corpse in the fetal position inside of an earthenware jar was in practice from the 12-13th centuries’ AD. The funerary jar was closed by placing another jar or a small ovoid pot on top. However, this tradition was abandoned by the 15th century when simple burials became the norm.