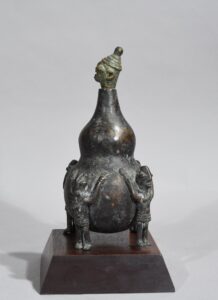 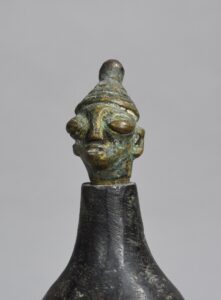 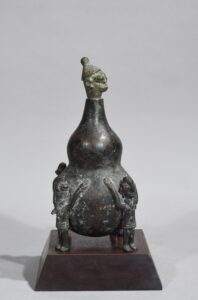 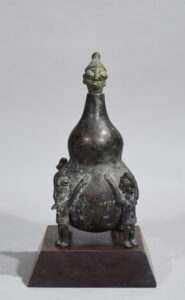 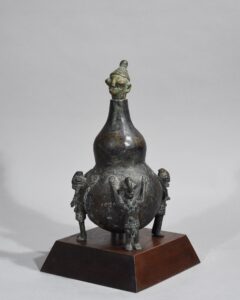 This beautiful and mysterious ‘container’ originates from the Sao Sokoto people of Cameroon and has been used to store ‘valuables’ in the family. The bottle is supported and guarded by two women and two men and the bottle ‘plug’ is shaped like a typical Sao person with its typical, braided headgear.

The term ‘Sao’ was likely to have first been introduced into the written sources during the 16th century AD. In his two chronicles (both of which were written in Arabic), The Book of the Bornu Wars and The Book of the Kanem Wars , the grand Imam of the Bornu Empire, Ahmad Ibn Furtu, described the military expeditions of his king, Idris Alooma. Those populations that were conquered and vanquished by Idris Alooma were generally referred to as the ‘Sao’, the ‘others’ who were did not speak the Kanuri language (a Nilo-Saharan language). These settlers, who were possibly the first settlers of the region, spoke one or another Chadic language, derived from the evolution of the Central Chadic language sub-family.

From archaeological evidence it is known that humans have inhabited Cameroon for at least 50,000 years, and there is strong evidence of the existence of important kingdoms and states in more recent times. Of these, the most widely known is Sao, which arose in the vicinity of Lake Chad, probably in the 5th century CE. This kingdom reached its height from the 9th to the 15th century, after which it was conquered and destroyed by the Kotoko state, which extended over large portions of northern Cameroon and Nigeria. Kotoko was incorporated into the Bornu empire during the reign of Rābiḥ al-Zubayr (Rabah) in the late 19th century, and its people became Muslims.

Islam became a powerful force in the northern and central portions of the country through conquest, immigration, and the spread of commerce from north and northwestern Africa. The most significant bearers of this faith, the Fulani, entered northern Cameroon in the 18th century. The first small groups of pastoralists were welcomed by the host populations. Eventually the Fulani, frustrated under non-Muslim rule and encouraged by the teachings of the mystic Usman dan Fodio, revolted. In the early 1800s Modibbo Adama was appointed by Usman to lead a jihad over large areas centred in northern Nigeria, which were subsequently incorporated into Usman’s Sokoto empire.

The Fulani expansion reached its southernmost point with the conquest of Bamum, a kingdom founded in the 17th century by Nshare, the son of a Tikar chief. Bamoum was one of the largest of numerous kingdoms that emerged in the grassland areas of Cameroon at that time. The Fulani conquest was brief and did not result in Islamization, although this faith was accepted by a later ruler, Sultan Njoya, in the early 20th century. (Partially citation from Encyclopaedia Britannica).