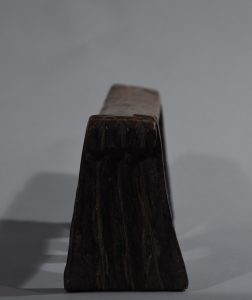 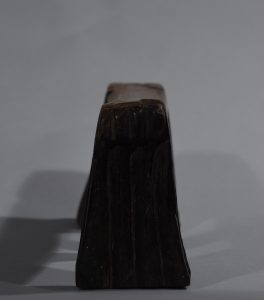 This classical head- or neck rest can be identified as Swazi (as opposed to Zulu) by the way the grooves run on the legs. In Zulu items, the fluted grooves run horizontally instead of vertically. For the rest, the headrests of both nations are quite similar with a central lug pending from the underside of the crossbar meant as a pillow for the head.

The legs appear to be almost invariably fluted with vertical grooves, and in some examples, tails and leg-like forms are added at the short end of the headrest. There is no specific research known to have been done on Swazi headrest symbolism and usage, it is usually assumed that they must have followed a pattern similar to their southern neighbors, the Zulu, with whom they share many cultural patterns.

This piece is collected by British major during the Zulu wars in Natal 1838-1843.

Headrests such as this are often damaged or often broken and discarded from general use. Often they are buried with their owners which is a practice done among many cultures in Southern Africa. However, this one is in absolute good shape with few scratches. The varied dark brown patina with wear indicative of much age and indigenous use. It suits fine in the category described in the book “Sleeping Beauties” by Stephen King and Owen King.

Condition: The yellow hardwood is fire-blackened on the legs, a process whereby a red-hot iron is rolled over an oily surface that is darkened in this way by controlled scorching. This relatively small object works like an architectural design in its lay-out and balance and, though less than 40 cm long.

Provenance: Ex – collection of Major Stetton, Lewis, Sussex, England. Obtained from him by P. Westerdijk in 1977. This object was acquired by the grandfather of the major during the Zulu wars in Natal.