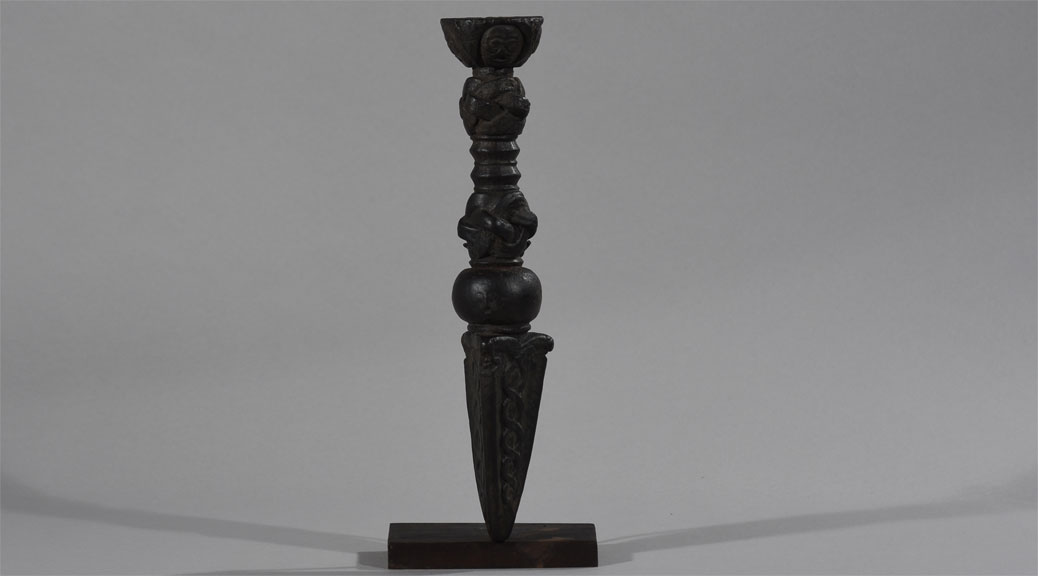 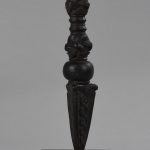 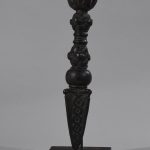 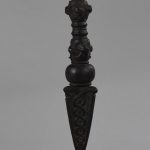 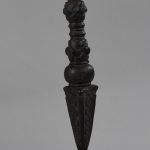 This is an exceptionally fine Thunderbolt (Varja) from Tibet. It has all the characteristics and virtues that a Varja must have.

The beautifully carved wooden Varja has a deep dark, almost black, surface as if it has been staying in a smoky room for many years. The top of the handle consists of three, almost four, finely carved faces, the latter looking like it has been removed deliberately. The handle is made of a couple of braided looking knots, then a ball shaped joint and at the end a triangular shaped point each side depicting a twisted ribbon with almost invisible snakeheads at the top.

The Vajra is the weapon of the Vedic rain and thunder-deity Indra, and is used symbolically by the dharma traditions of Buddhism, Jainism and Hinduism, often to represent firmness of spirit and spiritual power. The use of the Vajra as a symbolic and ritual tool spread from India along with Indian religion and culture to other parts of Asia.

The earliest mention of the Vajra is in the Rigveda, part of the four Vedas. It is described as the weapon of Indra, the chief among Gods. Indra is described as using the vajra to kill sinners and ignorant persons. The Rigveda states that the weapon was made for Indra by Tvastar, the maker of divine instruments. The associated story describes Indra using the vajra, which he held in his hand to slay the asura Vritra, who took the form of a serpent.

According to Asko Parpola, the Sanskrit Vajra- and Avestan Vazra- both refer to a weapon of the Godhead, and are possibly from the Proto-Indo-European root *weg’- which means “to be(come) powerful.” It is related to Proto-Finno-Uralic *vaśara, “hammer, axe”, but both the Sanskrit and Finno-Ugric derivatives are likely Proto-Aryan or Proto-Indo-Aryan, but not Proto-Iranian, state Parpola and Carpelan, because of its palatalized sibilant.

Condition: Apart from the removed face at the top, the Thunderbolt is in perfect condition.